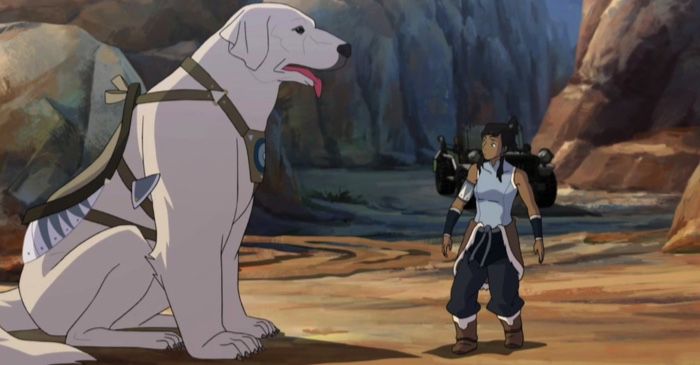 B-list heroes, however, haven’t gotten quite the same bump and I can think of a few who deserve a little love and air time. And with The Legend of Korra enjoying a resurgence thanks to its migration to Netflix in anticipation of an Avatar: The Last Airbender live-action series (anticipated air date: who the hell knows, die in a fire COVID-19) I thought it would be nice to take a little vacation from capes and tights to introduce y’all to some characters certain to steal your hards and since so many folx are new quarantine fur babies, it seemed like a good time to give you the deets on…

Korra found Naga after she was separated from her herd and earned her trust with fish jerky. Because who doesn’t love fish jerky? (Me. I don’t like fish jerky. It’s disgusting.) The two became inseparable.

Though Naga got herself and Korra arrested almost immediately upon their arrival to Republic City by fishing for lunch in a fountain, she soon proved her worth by keeping up with the Equalist convoy in which Bolin was being held prisoner and, along with Pabu, freed Korra and Mako after they were chi blocked trying to rescue their friend.

Always ready to aid her mistress, Naga next tracked Korra when she was captured by Tarrlok and returned her safe to the Air Temple, then freed Bolin so he could continue to destroy the Equalist airstrip after his earthbending efforts were limited by being tied down (literally) and then brought him to save Asami as she fought her father in a mechatank battle. She would rescue the various members of Team Avatar many more times throughout their various quests, often in tandem effort with Pabu because, let’s face it, Team Avatar Redux didn’t have a Katara to urge caution or, you know, thinking before acting, which meant they got into a lot of trouble and spent more time tied up, behind bars, or both than was strictly necessary.

Like Pabu, Naga often acted as an early warning system against enemies and evil spirits, though her humans were often too foolish to listen the first time and then needed her assistance to win fights they might have avoided if they had listened more closely when she growled the first time (see above disclaimer). And, while at heart a gentle creature, she was always happy to let her humans use her threatening appearance when they were in need of information and faced with a stubborn source. Her acting proved so good, in fact, she was cast alongside Bolin and Pabu in Varrick’s Adventures of Nuktuk.

Never one to hold a grudge, Naga would let even her friends know she was displeased with them, especially if they forgot to bring her a treat, by smacking them in the face with her tail, especially if they had been long absent or were asking for a favor which…fair enough, if you’re asking me for a ride to the South Pole you’d best bring some chocolate minimum.

Naga is extremely strong, able to haul as many as three mechatanks at once and carry a good deal of weight on her back. She is fast enough to keep up with a biplane. She has an excellent sense of smell and can track specific individuals for several days after they have passed through a given area. She also has a preternatural sense that allows her to detect nearby danger even if it hasn’t alerted her other senses.

Naga’s design is based on both the Kangal and Great Pyrenees breeds, as well as the Akbash.