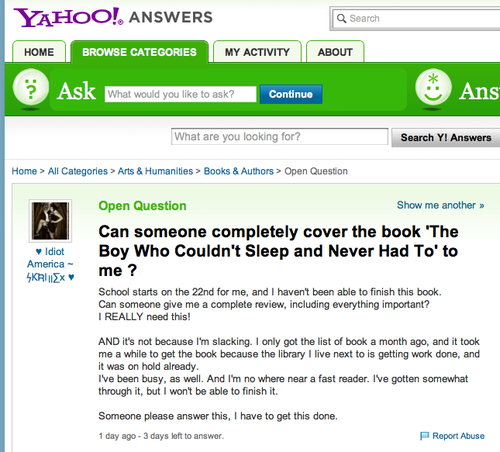 There has been a lot of debate as of late regarding the “bad behavior” of authors. The behavior in question is the hostile manner in which some authors respond to negative reviews of their work. In some bookish circles of the internet, it has become a real problem. I am always curious about these confrontations. I’ve never had one (thank goodness!), but, until the last couple of years, I also rarely wrote about a living author. When I did, it was one who had achieved such stature that they had long ago given up responding to negative criticism, if they even bother to read it.

The thing is that most of those negative reviews that I’ve seen authors react to are no worse than the average student response to a book they are being forced to read against their will. In those situations, though, it is the teacher who is requiring the reading that must respond to the negativity.  We do so as diplomatically as possible, and we try to help them find the positive elements of the book. Some of us take a more gentle approach than others, but, at least, we manage to keep our classrooms from devolving into the kind of chaos that has been seen on Goodreads as of late. I can just imagine one of these authors overhearing a classroom of students let loose about how awful a book is (even when they don’t actually mean it) and storming in, ready to defend his or her honor.

That’s the real problem, isn’t it? In the case of the negative reviewer, they are, 9.5 times out of 10, criticizing the book. It is not meant as a personal attack on the author, though some have, lately, taken it that way and overreacted. In the case of the students, their reaction is based purely on their resentment at being forced to read a book against their will. It rarely has anything to do with the book, the author, or even the teacher. We know that, so we don’t overreact when they get upset. We deal with it.

This past Sunday, a student posted an open question on Yahoo! Answers about a book he was assigned to read for summer reading, asking for a complete breakdown and review. It included the usual complaints about getting the reading list late, having a hard time finding it, and not being a very fast reader. I doubt he expected to get a response from the author of the book in question, but he did.  And it was kind of the perfect answer.  There’s a lesson (or two) to be learned from Mr. Pierson and how he chose to behave. 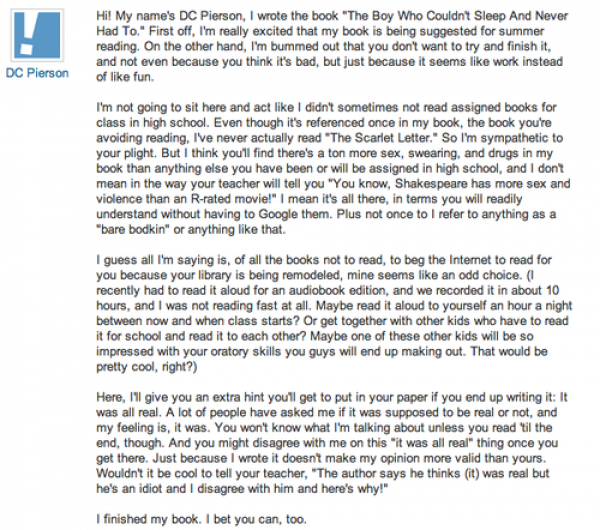 In case you’re wondering, I found this via Wil Wheaton’s Tumblr.  It had been reblogged several times since appearing on DC Pierson’s Tumblr on Sunday.