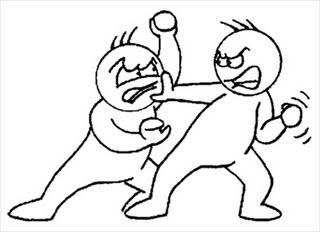 The literary interwebs seems to have lit up in recent weeks with posts about jerk-ass authors. Earlier this week, a wonderfully hilarious post by Chuck Wendig made the rounds. It’s titled 25 Bad Writer Behaviors (Or, How Not To Act Like A Rabid Little Penmonkey in Public). The site Stop the GR (Good Reads) Bullies launched last week, and is being tweeted around more than one of those “Hey, girl” Ryan Gosling posters. And then the LA Times Jacket Copy posted its 6 Twitter rules for authors, which basically amount to “Don’t be an assface.”

Perhaps this spate of author hate truly is spurred by a corresponding increase in authors behaving badly. Perhaps it’s the heat, and everyone’s irritable — both authors and overly defensive bloggers/reviewers. Perhaps it’s just a grand coincidence.

Here’s the thing: I don’t get it. Maybe I’m just the luckiest book blogger and amateur reviewer in the world, but I’ve never once had an angry experience with a writer based on a review or piece I’ve written. Even if there was disagreement, there’s always been at least level-headed exchange. Authors know that not everyone will like their books, and I strongly believe that the vast majority of writers out there are super cool. Perhaps you think I’m naïve. Perhaps I am.

But look, I do realize there are annoying writers (many of them self-published, seemingly, and just not quite aware of the “etiquette”) out there. This type of writer often assumes you owe them a positive review, because it’s really hard to write a novel, and now that they have, they deserve to be Stephen King Famous. So, trust me, I’m not claiming that if you have had a contentious interaction with a writer, it’s automatically your fault. But I wonder if, when you get feedback from an author on a review, and that feedback rubs you the wrong way, perhaps your first step shouldn’t be to take a deep breath and not automatically assume this is just another case of an a–hole writer trying to defend the quality of their precious novel. Maybe you were having a bad day and said something unnecessarily mean. Or you didn’t fully support your opinion with a logical argument. Or maybe you flat out got something wrong.

We could all take a lesson from novelist Patrick Somerville and NY Times culture editor Ed Marks. If you’re not familiar with this story, here’s the recap, titled “Thank you for killing my novel.” I love this story, not just for the resolution and for the fact that Somerville is getting more publicity now than he ever would have for even a glowing review, but for the fact that the resolution came with humor and wit, instead of anger and name-calling and bad feelings. For the record, I have no idea if his novel (titled This Bright River) is actually good or not, but I’m definitely more interested in it now than I ever would’ve been before. And that’s because Somerville wasn’t a jerk.