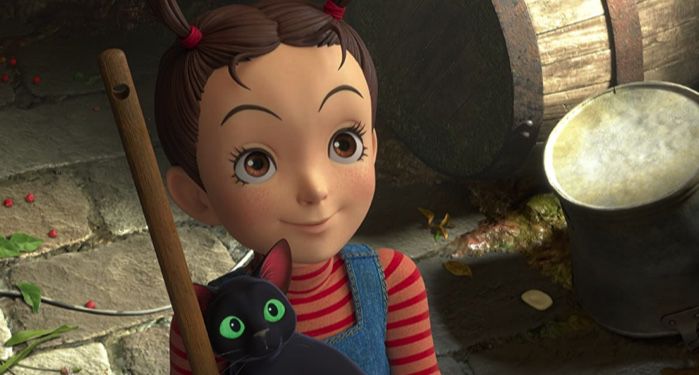 Growing up, I had a feeling the horror genre might not be my cup of tea when I noticed I was the only one of my three siblings closing my eyes for just about the entirety of The Mummy with Brendan Fraser. To this day, I’m still a major eye-closer during scary movies. When it comes to books, my tolerance is usually much the same. Everyone has their own limits to what they can handle watching and reading. I’ve always accepted that I’m on the extreme scaredy-cat end of the spectrum. However, watching the Studio Ghibli film Earwig and the Witch helped me see the horror genre in a new light and better understand the benefits of the genre for kids.

Earwig and the Witch: A Book and a Film

Before I dig into my horror genre revelations, let me get you acquainted with Earwig and the Witch. Directed by Hayao Miyazaki’s son, Gorô Miyazaki, the Studio Ghibli film adaptation of Earwig and the Witch released in 2020. There was a lot about this film that piqued my interest.

First of all, it’s Studio Ghibli, which means every fiber of my being demands I watch it. It’s also based off the Diana Wynne Jones novel of the same name, Earwig and the Witch, making it the second Studio Ghibli film to adapt a Jones novel. The first was Howl’s Moving Castle, a book and film adaptation I hold very close to heart. Diana Wynne Jones is one of my favorite fantasy authors. Combining Studio Ghibli and Jones is like putting together chocolate chips and mint ice cream; they complement each other in the most perfect way.

Along with these enticements, Gorô Miyazaki also directed the sweet and heartwarming film From Up On Poppy Hill, another one of my all-time favorite Ghiblis. Taking these factors into account, I was very intrigued.

However, one wild card factor for me involved the studio branching away from their usual animation style. In a 2021 interview with Gorô Miyazaki for The Verge, Goro explains, “Studio Ghibli has always done hand-drawn-style animation, so we knew that we weren’t able to recreate that through 3D CG, so it was a matter of which direction we wanted to go with. Whether it’s going to be a very photorealistic visual, or trying to find a different path. That was when I referenced stop-motion animation, using a lot of puppets. I felt that was quite fitting for what we were trying to do with this project. I referenced that a lot in creating the visuals.” Curious about this stop-motion animation style 3D CG, I settled in for an Earwig and the Witch movie night and was pleasantly surprised and enamored.

So What’s Earwig and the Witch About?

Having finished the movie, I immediately devoured the book (reverse order, I know). I was pleased to discover the film’s storyline does an excellent job of following the book’s plot. The one key difference the movie offers is the retro music subplot, and this only adds further depth and nostalgic delight to the film.

In both the film and the book, we first meet Earwig as a baby when her mother leaves her at an orphanage while on the run from a group of witches. Between her good friend Custard and their kindly caretakers, Earwig enjoys her childhood at the orphanage.

Then one day, much to her disappointment, Earwig gets chosen by a strange pair of foster parents. Upon arrival at her new home, Earwig discovers Bella Yaga is a witch in need of assistance, and the Mandrake is a powerful demon. Despite those two, Earwig finds herself an ally in the charming talking cat Thomas. (I am always here for talking cat characters.) Earwig then sets herself on a journey to either learn magic or escape the house at whatever the cost.

As I watched this film, I noticed that some of the scenes felt scarier than I’d expected. Between Bella Yaga’s ghastly threats, mild body horror, and the blistering temper and all-seeing eyes of the Mandrake, Earwig finds herself in a pretty terrifying living situation. In some ways, it felt reminiscent of Neil Gaiman’s Coraline. And yet, I found Earwig’s character truly unique.

In his interview with The Verge, Gorô Miyazaki explains why Earwig’s character stood out to him: “One of the things that I loved about the story was the protagonist Earwig not being your typical, well-behaved girl. When it’s necessary, she can be manipulative of people around her, and when somebody treats her bad, she thinks of how she can get back at them…When she faces a difficult situation, she is not someone who would just persevere and wait until somebody saves her. She’s the one that actually acts and tries to change the situation herself.”

I completely share Gorô Miyazaki’s sentiment. Earwig’s bravery, cleverness, and resourcefulness helped me feel like I could be like her in scary situations too. When faced with danger and cruelty, Earwig responds with ingenuity and mischievousness. She possesses this self-assured nature that she can achieve whatever she sets her mind to. In the novel version, Jones writes, “Earwig saw that this was going to be a very big challenge indeed, far bigger than any she had faced at St. Morwald’s. That was all right. She liked a challenge.” (p. 22). Rather than get dissuaded by challenges, no matter how terrifying, Earwig simply plots a new way forward.

Seeing Earwig respond with such nonchalance and quick-thinking in scary situations began shifting my lens on how impactful the horror genre can be for kids. I could feel Earwig’s courage seeping into me, along with the realization that the horror genre can help kids (and adults) face their own fears too.

The Horror Genre Gives Kids Tools to Face Their Fears

Author Greg Ruth (2014) shares about the benefits of the horror genre for kids, explaining: “Plainly put, horror provides a playground in which kids can dance with their fears in a safe way that can teach them how to survive monsters and be powerful, too. Horror for kids lets them not only read or see these terrible beasts, but also see themselves in the stories’ protagonists. The hero’s victory is their victory. The beast is whomever they find beastly in their own lives. A kid finishing a scary book, or movie can walk away having met the monster and survived, ready and better armed against the next villain that will be coming.”

I think Ruth makes great points here. Children’s horror stories can empower kids and help them feel better equipped to tackle their own fears. As they see brave characters triumphing in scary situations, they can see themselves in the character’s shoes and absorb some of their strength. It’s exactly how I felt as I watched Earwig shine in her dark circumstances. As author Cavan Scott (2019) attests, reading books or watching films in the horror genre provides children with the safety net of approaching the material in a safe space.

Ruth also emphasizes the reality that “fear is not the best thing in the world, of course, but it’s not going anywhere and we are likely forced to meet it in some capacity, great or small, each and every day. There’s no way around it. Denying this fact only provides more fertile ground for fear to take root. Worse yet, denying it robs us of our agency to meet and overcome it.” This statement really resonates with me. When we deny that scary things exist, we risk becoming even more afraid of the unknown. We also lose the opportunity to think about how we’d overcome obstacles such as these.

As a side note to all this, both Ruth and Scott do mention the importance of authors handling the horror genre for children with sensitivity and thoughtfulness. Ruth discusses how being scared and being terrorized are different matters entirely. He recognizes that distinction and says, “if you navigate it right, it can be a completely positive and powerful experience.”

Scott also mentions that children more likely than not will know when they’re not ready for a certain level of scariness and can decide this comfort level very well themselves. If they do choose to pass on a scary story, Scott says this moment becomes “a great opportunity to discuss what scares them and how to judge situations they’ll face later in life.”

Though I’ve always been the kind of person to shy away from horror, watching the Studio Ghibli film Earwig and the Witch helped me better understand the benefits of this genre for kids. Despite some of the scary situations she finds herself in, Earwig never wavers from showing determination to triumph. The children’s horror genre can give kids these empowering heroes to see themselves in.

Earwig’s story has left me feeling a little bit braver and also wishing for a magical talking cat named Thomas. I hope her story works its magic on you too. If you’d like to dig further into some related reads, check out the following: