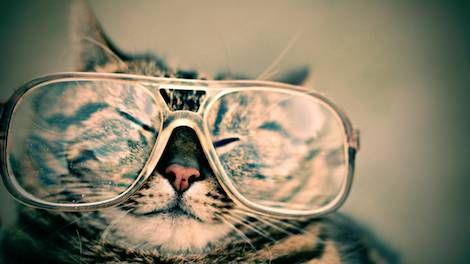 When it comes to hand selling books, some titles need a little more help than others. A really great book oftentimes just needs a little encouragement from a bookseller in order for a reader to look past a horrible cover or a tired trope. As a bookseller, I consider it my duty and privilege to find the perfect book recommendation and pitch it in such a way that will make the customer grab it out of my hands and say, “Sold.”

This is sometimes easier said than done.

I had been a bookseller for about two years when I obliviously stumbled into a bookselling move that has never once failed me. Its 100% success rate is downright magical, in fact. I’m almost afraid that by speaking of it, I’ll jinx it.

For real. I was helping a mother find fantasy books for her twelve-year-old daughter, working hard to narrow down my range of recommendations while at the same time trying not to overwhelm the mother, when I uttered the words “…and there’s this cat, he’s magic and he talks.” Reader, that book was ripped from me so quickly that I was left staring at my hands. And before I could blink, the three sequels were in the customer’s arms.

I was bemused that out of all of my eloquent descriptions and excitement, it was the cat detail that got this customer excited. So I tried it again a few days later, on a teen girl who was looking for something new in fantasy. Her bored expression didn’t change once while I rattled off a list of exciting attributes from a variety of fantasy reads, but when I paused to take a breath, she said, “Wait, which one is the one with the cat?”

What started off as a joke became quite serious the more often I employed the “magical talking cat” line, and I began to really move the books. Sure, magical talking cats aren’t the only appeal to these books. But any good bookseller knows that a good hook is all you need. Still, magical talking cats? Maybe it’s because, if I’m being painfully honest, I’m more of a dog person than a cat person, but I found this discovery a little puzzling. Is it because we as a society watch so many cat videos on the Internet that good cat entertainment has become a genre of its own? Does it stem from all the long hours we spend imagining the sassy as hell comments cats would utter if they could speak? Is it a side effect of the mind control cats exert over us?

I don’t have any answers, but if you want to pursue the magical talking cat subgenre of fantasy, here are the three books I recommend (and sell!) the most: 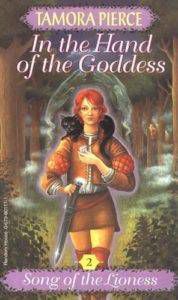 Fair warning: Our talking black cat doesn’t make his grand entrance until book two. But true to the nature of cats, Faithful just trots into the scene and decides that he’s going to live with protagonist Alanna from now on. Wisely, she goes along with it. Faithful eventually starts talking to Alanna—all on his own terms, of course—cluing her into the fact that he’s more than just a stray but actually a denizen of the realms of the gods. He can talk to all humans but he doesn’t always care to, leading to some pretty hilarious scenes and reactions when he does choose to speak up. As far as magical talking cats go, Faithful is classic.

The Abhorsen Trilogy by Garth Nix

Oh, Mogget. Mogget first appears in Sabriel, when our eponymous character finds her way into the dangerous magical Old Kingdom to seek refuge at her father’s house. Mogget is a literal demon that Sabriel’s father has subdued into a recalcitrant cat by way of magical collar. Mogget both warns Sabriel not to remove his collar because he’s deadly, and asks her repeatedly to do just that. Cats. As a dark magical being, he possesses significant information about the dangers the characters face, but he’s not too into sharing said info when doing so gets in the way of his naps. He does have a rather interesting character arc, though, which keeps his grumpy cat attitude from wearing thin through three books. Also, if you’re more of a dog person, there is also a magical talking dog named Dog in two of these books, and Dog and Mogget’s banter is delightful. 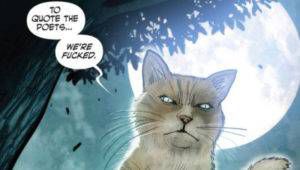 Monstress has a whole mess of magical creatures (not to mention a super dark and exciting storyline!), but just know that there are multiple talking magic cats in this universe! Our main kitters is the two-tailed Master Ren, whose sarcasm is unparalleled. He’s blunt and mysterious, and he doesn’t fit into simple categorizations of good or bad—he’s annoyingly helpful and unhelpfully annoying at any given time. Inserts between issues also feature a Professor Tam Tam (you can tell he’s distinguished by how many tails he has!) lecturing a bunch of kittens about philosophy and magic, which is about as weirdly wonderful as it sounds.

What are your favorite magical talking cat stories?