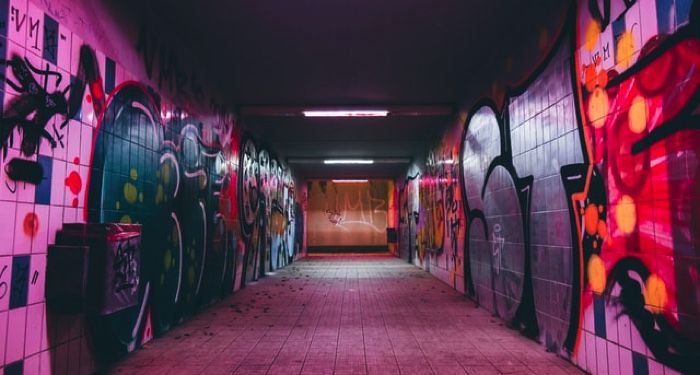 In the past few years, we’ve seen more attention given to discussing and destigmatizing mental illness across the U.S. Of course there’s a long way to go concerning how we deal with mental illness in this country, but some incremental progress has been made. Resources abound for people who need help and some folks are becoming more open about their own struggles. Comics, naturally, have been tackling these issues for decades, but we’re now seeing even more comics across the board exploring topics of mental health. Recently, Book Riot had the opportunity to talk to two independent comic publishers about mental health in comics.

James Lucas Jones is the Editor-in-Chief of Portland, OR based comic book and graphic novel publisher Oni Press, which was founded in 1997.

The Press is known for independent comics and licensed franchise comics. They publish everything from Scott Pilgrim to the Tea Dragon Society. The press also released Sheets and Pilu of the Woods. Brenna Thummler’s Sheets explores issues of sadness and loneliness, while Mai K. Nguyen’s Pilu of the Woods deals with anger management and grief.

C. Spike Trotman is publisher and cartoonist of Iron Circus, which started in 2007 and is based in Chicago. Iron Circus is known for anthologies covering a variety of topics from death, weed, travel, fairy tales, and erotica like YOU DIED: An Anthology of the Afterlife. The press also publishes fiction and nonfiction narratives like Jon Allen’s Julian in Purgatory.

I asked both why it is so important to talk about mental health in comics. Jones said, “It’s important to talk about mental health in general. It’s that removing that stigma, and keeping it from continuing to be something that is really just looked down upon.” He explained that he himself has had to struggle with mental health issues and he has always tried to be very transparent about those issues, “so that folks know that they’re not alone; no matter how cool somebody’s job is.”

Trotman added, “In my opinion, mental health is part hygiene and self care, like making sure that you’re aware of your mental health. Like being aware of your limits, aware of your vulnerabilities, and aware of when you’ve had enough and you need a break.” We need to be able to look after ourselves because otherwise, we won’t function just like if we don’t take care of other parts of our bodies.

As a lifelong lover and, at one point, scholar of comics, I wondered if there is something unique to the medium that would make comics great for discussing issues of mental health. “I think the sort of melding of words and pictures together, it has a unique advantage,” Trotman explained, “unlike a lot of other creative mediums, a comic can be made by one person. And as a result, you can see the creative output of that one person, it can sort of give the reader an unusually pure and undiluted way of communicating with the creator.” While film also has the union of images and sound, each film requires a lot of different people and their voices. “Whereas a comic, all you need is just a pencil and a piece of paper and some way to get it on the internet,” she added.

Jones agreed about the intimacy of the art form with even just one person communicating their ideas through the medium to the reader. I wondered also about the visibility of thought and speech balloons as well. Jones added that “one of the biggest powers that comics has is the abstraction… that abstraction makes people and figures more relatable, it’s easier to see yourself in them. Comics are such an excellent tool for just visual literacy in general.” He thinks the power lies not just in seeing people’s thoughts but also being able to see themselves in the body language of characters, and how they interact with people. That allows people to empathize in new ways, he said.

How Do Their Presses Handle Issues of Mental Health?

Jones said, “It’s just a side effect of the nature of the company that we’ve always been so creator centered and creator driven and author driven that having those more personal works have been a part of the catalog from the beginning.” Some books have addressed various mental health issues head on, such as Archival Quality by Ivy Noelle Weir, illustrated by Steenz or the aforementioned Pilu in the Woods. Mental health issues have come in other works like art house books and other graphic novels/memoirs as well.

Jones added, “the journeys of those characters are so meaningful and so reflective of the struggles that so many people have today. I think that even though the books have a much different type of narrative, it still does a lot of work in the same areas.”

While mental illness is intertwined with various works in Iron Circus, Trotman brought up two texts. The first is YOU DIED: An Anthology of the Afterlife that explores our relationship with our own mortality both in terms of our own deaths as well as those of our loved ones. She appreciates the spectrum of stories about death from self-harm to memorializing loved ones, even if it is illegal…

How do they think mental health is dealt with in superhero and more mainstream comics?

I’ve been watching a lot of Batman recently and obviously, there are some troubling ways in which mental illness has been depicted in the franchise. Trotman said that it’s hard to compare superhero comics with other comics since they “have to meet certain parameters just to exist” and have to be published on a rigorous schedule. One person generally writes a graphic novel or memoir, while comics that feature Batman and other superheroes are “the result of the work of dozens upon dozens of creative forces over dozens upon dozens of years. You’re doing the characters and the storylines a disservice if you don’t sort of consider each individual arc in isolation because the intent of a creator doesn’t necessarily carry over between creators.”

Jones added that even superheroes are not monolithic in how they treat mental illness. He pointed out that some Marvel comics can be “a little bit more relationship driven and a little bit more character driven. You have all the same issues in Batman, but if you flip that over and look at Spider-Man throughout his career, that’s all about Peter struggling with mental illness and depression and the weight of the responsibilities and everything else. So I think it depends on the book, superhero stuff has such a wide content catch. It really depends on which specific eras or works you’re talking about.”

What challenges do creators face when tackling mental health in comics?

Finding the best and most respectful way to express these issues can be hard. Jones explained, “While the comics community is very open, the comics community is not monolithic either and it’s putting yourself out there. In that way, it is hard when there are significant bad faith actors out there who are going to twist and turn and potentially take what you’re trying to express out of context.” He called creators who do this work “incredibly brave.” It’s challenging given the politics of it and the fact that mental illness is so personal that people even disagree on the right treatment.

Trotman added, “It’s incredibly important that things are tackled in a way that doesn’t stigmatize, stereotype, or rely on sort of fantastical and sensationalized interpretations” of mental illness. It’s damaging both for readers to understand what is going on as well as people who might be facing similar mental health issues and being further harmed by the depiction. People need to do the right research and work with sensitivity readers to make sure the depictions are based on reality.

I asked both publishers what else they wanted me to know. Trotman summed it up well: “Comics are for everybody. There’s a comic about every topic you would want to read about including dealing with mental illness.” Well said!

Jones concluded, “You have a community and that you’re not alone. There are other folks that have experienced things similar to what you have and there are resources there.”

Thank you so much to both Spike Trotman and James Lucas Jones for speaking with me on this important topic.