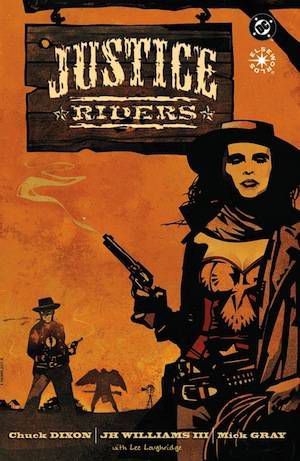 If you’ve been reading Convergence, you know that among the many heroes and villains battling out for survival is a Wild West-style group from somewhere called “El Inferno”: the Justice Riders. Things, uh, don’t go so well for them. You can read Nightwing/Oracle for the deets, but unhappy fate aside, I was stoked to see an appearance by my all-time favorite Elseworlds characters – and surprised, because aside from having been established in a DC Nation column to be one of DC’s many universes (Earth-18, to be precise), the Justice Riders have been contained to a single, self-titled story from 1997. But you guys, it’s such a good story.

Written by Chuck Dixon and drawn by J.H. Williams III, with inks by Mick Gray and colors by Lee Loughridge, Justice Riders was released as a 64-page prestige format one-shot during the height of DC’s exploration with Elseworlds, which was the sort of “brand name” they gave to their alternate universe stories. It’s not one of their better-known Elseworlds, like Kingdom Come or Gotham By Gaslight, both of which are also part of Convergence. This is probably largely because it’s a Justice League story without Batman or Superman, and a slightly random cast that most resembles the Justice League International of a decade prior.

No, this League is led by Wonder Woman, a.k.a. Sheriff Diana Prince, who keeps order in the Old West town of Paradise. When Paradise is destroyed by Felix Faust, working on the orders of sinister business mogul Maxwell Lord, Diana puts together a posse that includes the masked fugitive Kid Flash (Wally West version), the half-Cheyenne Katar Johnson, the green-skinned manhunter John Jones, the grifter Booster Gold, and a slightly-mad scientist just called “Beetle.” (I would have liked more than one female character and more than one POC, but, uh, at least Diana’s the protagonist?) Together, they head out in search of Lord to avenge the town of Paradise and put a stop to his plans to corner the market on westward expansion.

It’s a stunning book, which is only to be expected from J.H. Williams, who makes his western setting a desolate and lonely place, full of shadows and heavy with the sense that danger lurks somewhere just out of sight. His Justice Riders are rough and real-looking, even the nattily dressed characters like Booster, Lord, and Pinkerton legend Guy Gardner, the Baltimore Kid; the characters feel mortal and world-weary. This Diana isn’t a goddess, just a tough-as-nails mortal woman, but that doesn’t make her any less of a badass than she usually is.

Dixon’s script matches the isolation and mystery of the art. Any backstory is given in hints and passing comments. We don’t know how Diana became sheriff or whether “John Jones” is still from Mars; we don’t know about Ted Kord’s past encounters with Max Lord (interestingly, this book was published long before Max went evil and killed Ted) or, most fascinatingly, why Guy is trying to arrest Wally for the murder of Barry Allen. But that lack of explanation works. It gives us a sense that these characters are more than just this adventure, that they have histories, both shared and secret, and it’s fitting that these loners and misfits have stories they’re unwilling to tell. I would love to read a hundred more issues explaining every missing detail, but at the same time, I kind of like the mystery.

Moody setting and mysterious cast aside, the book is still a heck of a lot of fun. Wally gets most of the best lines, and of course Beetle and Booster are always a delight – I laugh out loud every time I read them trying to fast-talk Guy out of shooting them. Plus, this comic has the Martian Manhunter rocking a poncho, not to mention the most inexplicably naked Hawkman ever. How can you not want to read that?!

Justice Riders is out of print now, but you can get it secondhand through Amazon, or for $1.99 on Kindle or Comixology, which is quite frankly a steal. I heartily recommend checking it out!

And, you know, just ignore what happened in Nightwing/Oracle. I’m sure back on Earth-18 the Justice Riders are fine.