This Riot Recommendation on YA sci-fi books is sponsored by Your One and Only by Adrianne Finlay. 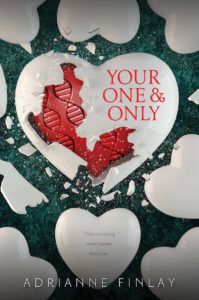 Jack is a walking fossil. The only human among a sea of clones. It’s been hundreds of years since humanity died off in the slow plague, leaving the clones behind to carry on human existence. Over time they’ve perfected their genes, moving further away from the imperfections of humanity. But if they really are perfect, why did they create Jack? Meanwhile, Althea-310 struggles with the feeling that she’s different from her sisters. Her fascination with Jack doesn’t help. As Althea and Jack’s connection grows stronger, so does the threat to their lives. What will happen if they do the unthinkable and fall in love?

I can’t be chill about a good sci-fi story (she types bleary-eyed after a Star Trek: The Next Generation all-night marathon). And as the kids in my extended family grow into teenagers, I need them to get into the genre too. Or else I’m going to have to learn how to use that snappy chat thing if I want to relate to them, and I just don’t have the storage on my phone. So I asked for your favorite works of YA sci-fi. You told me and now I’ve got a library hold list that’s going to give me so much cred with the youths.

Citizen of the Galaxy, Podkayne of Mars, and Farmer in the Sky by Heinlein

Needle and Through the Eye of a Needle by Hal Clement

A Conspiracy of Stars by Olivia A. Cole

The Zodiac series by Romina Russell

The Binti series by Nnedi Okorafor

Avalon and Polaris by Mindee Arnett

Leia: Princess of Alderaan and Defy the Stars by Claudia Gray

The Illuminae Files series by Amie Kaufman and Jay Kristoff

The Tripods series by John Christopher

The Islands at the End of the World by Austin Aslan

The Earthseed series by Pamela Sargent

The Carve the Mark series by Veronica Roth