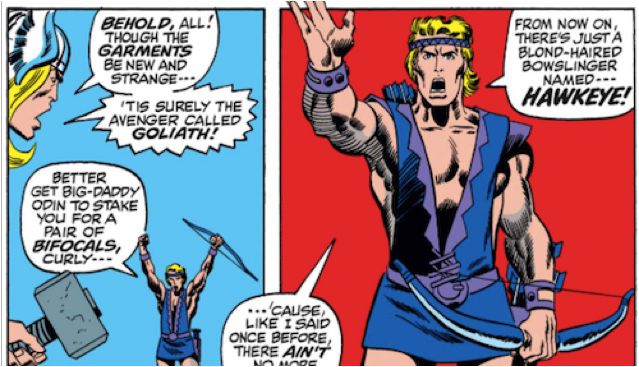 Here on Fashion Disasters, we’ll showcase those poor slobs who just can’t seem to get it right. Today: Clint Barton!

Like our debut Disaster, Roy Harper, Clint is a thirsty mess of an archer and his own worst enemy. But as Tolstoy said, every unhappy family is unhappy in its own way, and the same goes for unhappy dressers. Let’s take a look at Clint’s very unique style.

Hawkeye debuted in Tales of Suspense #57 (September 1964) as a villain, but by his fourth appearance had switched sides and joined the Avengers. Here’s his original togs: 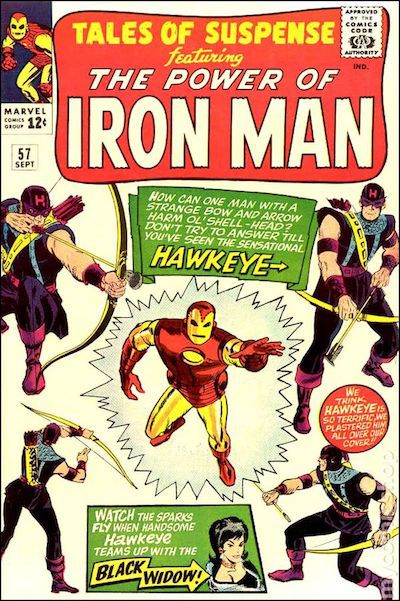 I can see what they’re going for here—sort of a medieval Black Knight aesthetic, but spandex, and also with two complimentary tickets to the gun show. I have to give them credit for trying a bit harder than DC did with that other famous comics archer, Green Arrow, who by this point had been running around in essentially just a T-shirt and leggings for 23 years. (You’ll note that Clint steers well clear of Robin Hood references, probably to avoid those same Green Arrow comparisons.)

But the chainmail collar seems arbitrary at best, and the chainmail suspenders are downright baffling. The giant H on his forehead, though following in a strong Steve Rogersian tradition, is the funniest thing I’ve ever seen. Most importantly—and this is a lesson Clint will never learn—purple on purple is a less-than-ideal combo. (And it’s not because Clint’s a dude! I have Medusa and Starfire on my “To Disaster” list for similar reasons. The Grimace is a bad look regardless of gender.) 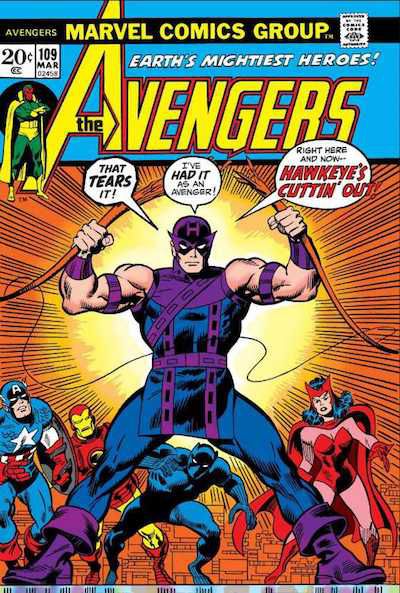 Once he became a member of the Avengers, Clint streamlined his color scheme, ditching the yellow and gray and sticking with purple and blue. Again, it’s very Violet Beauregarde of him, and that’s not a compliment even if she is a gum-chewing boss.

(Side note: I feel like a bow that snaps if you bend it is…not a great bow.)

I used the cover with Clint quitting because it shows his costume off the best, but before he quit, he borrowed Hank Pym’s growth particles for a brief stint as Goliath: 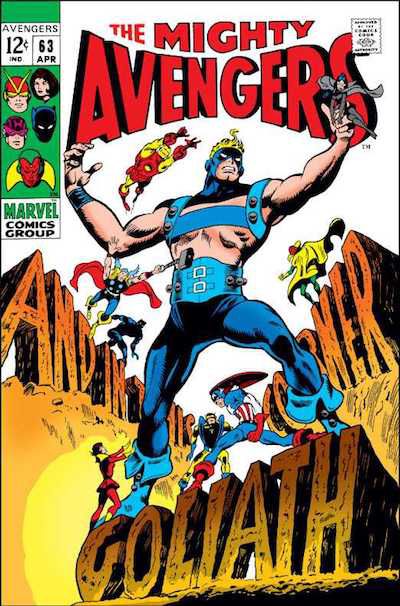 I don’t know what it is about the Goliath name that makes dudes want to get half-naked in weird ways, but it does—Bill Foster’s classic look boasted a tummy window. Maybe it’s an attempt at reparations for all those gross “looking up Giganta’s skirt” jokes spawned by Super Friends? Oh well, at least the artist didn’t have to risk the wrath of the Comics Code Authority by drawing nipples! Just some saucy armpits and a weirdly long forelock.

(I was about to point out how funny Jan’s vogueing is when I just noticed Steve’s pose and now I can’t stop laughing.)

And then, of course, there was the most famous reindeer of all: 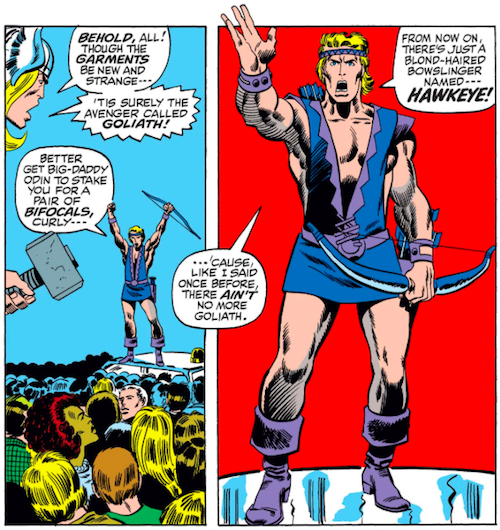 Nothing I can say could possibly be as funny as this page on its own, so I will just make three quick points:

1. I love this terrible costume with every fiber of my being, OBVIOUSLY.

2. If it’s stupid for Clint to be wearing this little clothing while fighting crime (and it is), it’s stupid when female characters are drawn that way too.

3. Please don’t let the skirt make you overlook the mullet.

Anyway. Back to Clint quitting the Avengers, which as we’ve seen above, he put on pants to do. 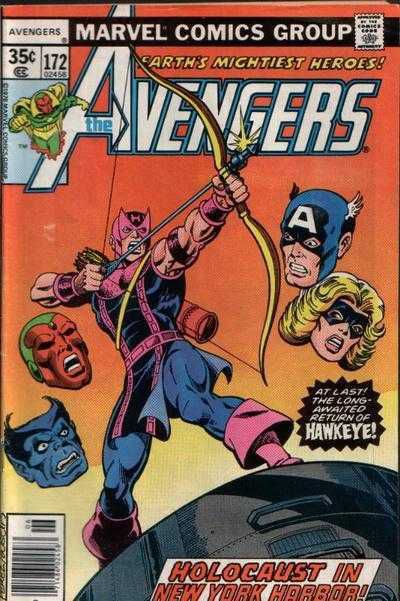 After snapping his bow (and then presumably sheepishly going out and buying a new one), Clint made his way across the country to the West Coast Avengers, where his tunic got longer and his mask got pointier. A lot pointier: 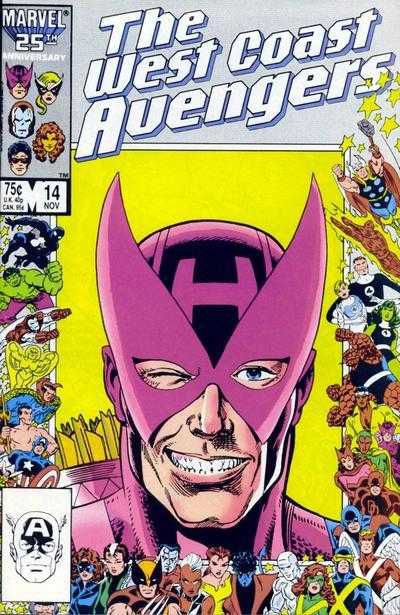 Sorry, I just love that cover so much, I had to include it. 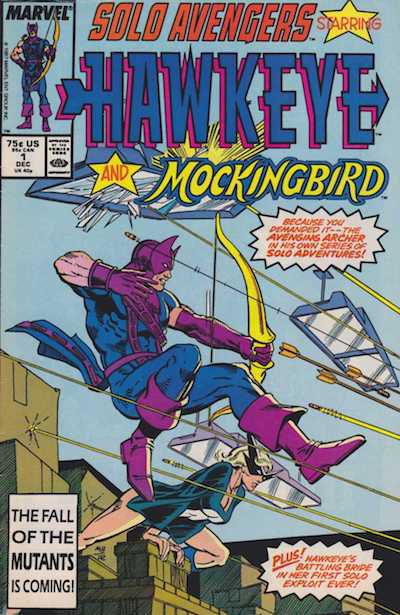 He also began experimenting with sleeve and glove lengths, finally (mostly) settling on one long one (to protect his arm from the bowstring snapback) and one short. I think this is probably the best iteration of this particular costume: the medieval theme is still clear, the longer mask and tunic show a certain sartorial commitment, and the glove-as-bracer makes sense from a practical standpoint. It’s still not a good costume, but it’s the best we’ve seen so far.

And then the ’90s happened. And they happened to Clint hard.

First, he donned armor, because that was the rule back then: 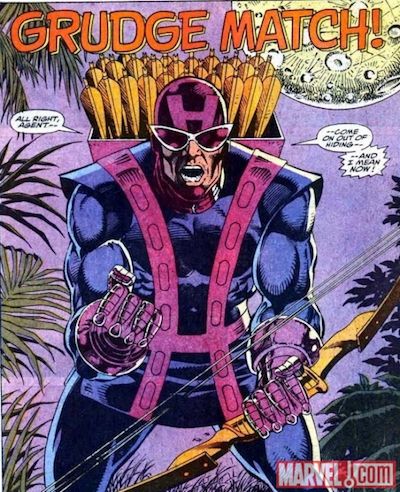 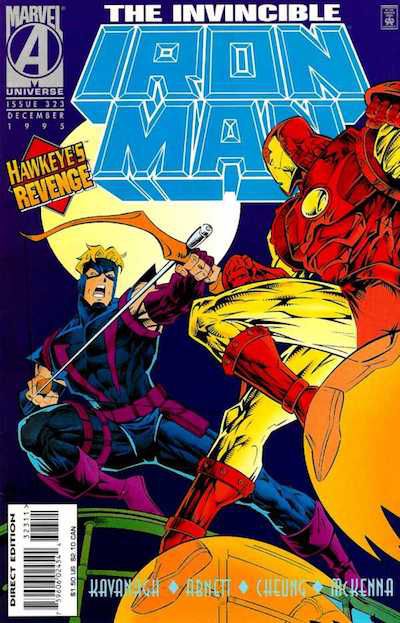 Then he went back to spandex, cut the top of his mask off, and picked a fight with Tony for some reason. Honestly the worst thing about this is the ’90s-style draftsmanship and not the costume itself, but that’s not saying much. 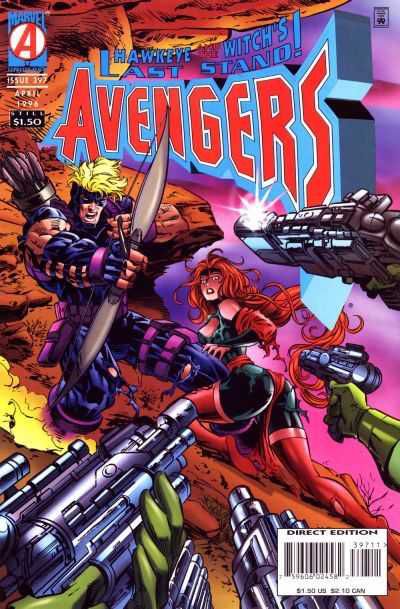 Then he added straps! Straps everywhere! 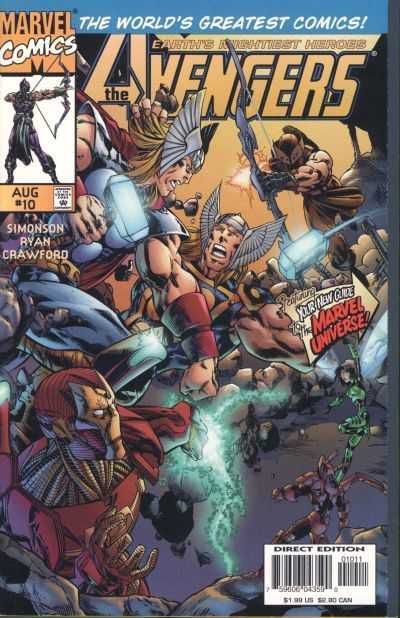 Then he started wearing brown, for some reason? (Yes, that’s him at the top right.) Also a really long split skirt that he definitely tripped over multiple times per fight. 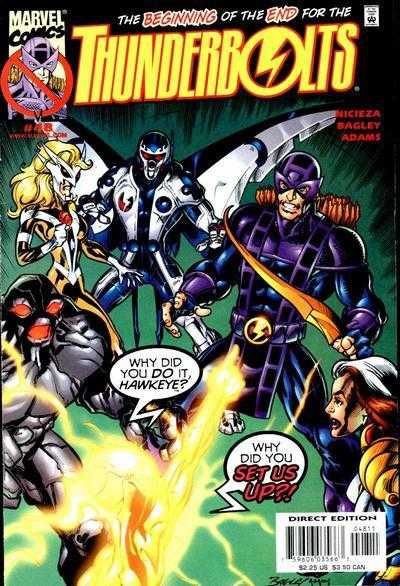 Finally, in the literal last year of the decade, he calmed the hell down and went back to something similar to his classic look.

But the 2000s had their share of fashion experiments for ol’ Clint! 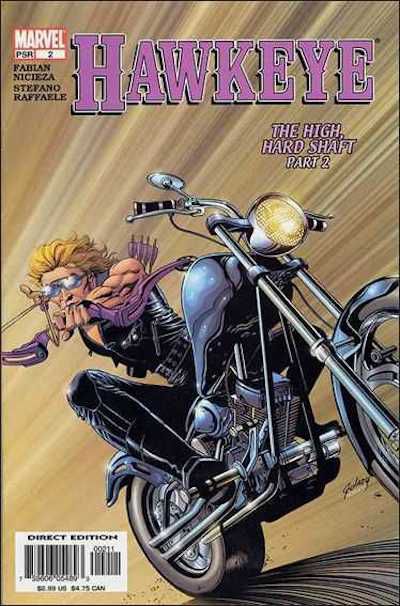 This is just a *recreational* outfit, not a costume, but I couldn’t see that getup and that story title and not share it with you. I wouldn’t do that to you folks. 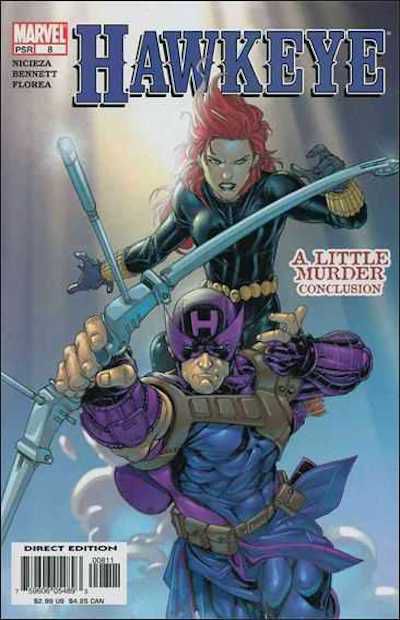 Then he got a weird harness? I don’t know, I’m more concerned with what’s happened to his knee.

He died for a bit (not because of the knee. I don’t think), but that didn’t stop him from slipping into something more comfortable in the House of M alternate universe: 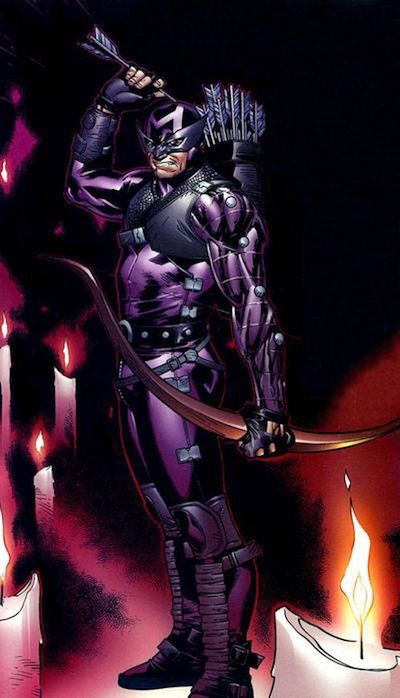 Okay, he doesn’t look comfortable at all, actually. I like this purple and almost-black combo better than any color scheme we’ve seen so far from our boy, but goodness this look is busy. (2007 was a strong “buckles make it look realistic” era.) Also, I don’t know why he has a Winter Soldier arm.

Back in the main universe, he came back to life, but decided to pick up a new codename for a bit. The samurai-inspired Ronin identity had been originally used by Maya Lopez, aka Echo, when she wanted to go incognito, but since she was done with it (and since the costume was sized for a dude because storyline writer Brian Michael Bendis had originally intended for Ronin to be revealed to be Daredevil…), Clint took it up: 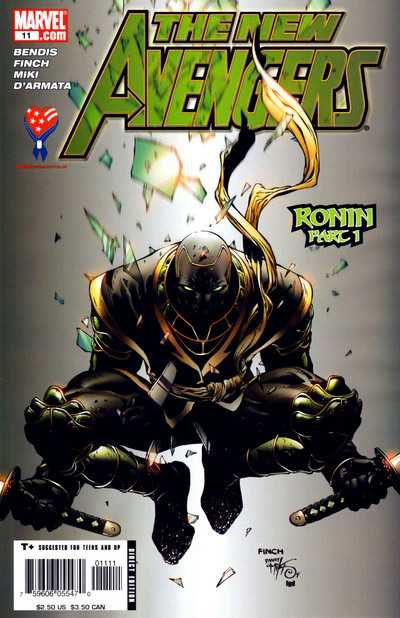 That’s actually Maya in the costume, but Clint wears literally exactly the same clothes when he’s Ronin, so I chose an image that would let you see it. It’s actually a fine costume (if you look past a Native American woman and then a white man co-opting a Japanese aesthetic and codename, which I guess you sort of have to if you…read superhero comics at all, ever), but it’s not really Clint’s and so he gets no points for it.

You might be thinking, “Jess, you’re in the Aughts now, and that means Ultimates. Did Clint exist in the Ultimate universe?”

OH BOY DID HE: 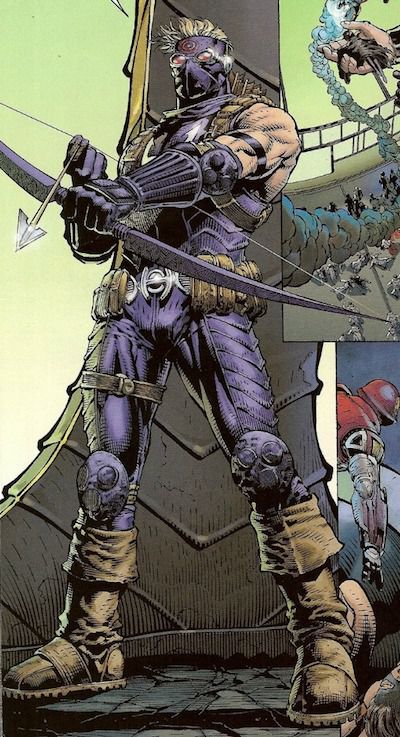 You know what I see when I look at that outfit? I see a real cool and tough guy, that’s what.

Thankfully (sadly?) he soon toned it down: 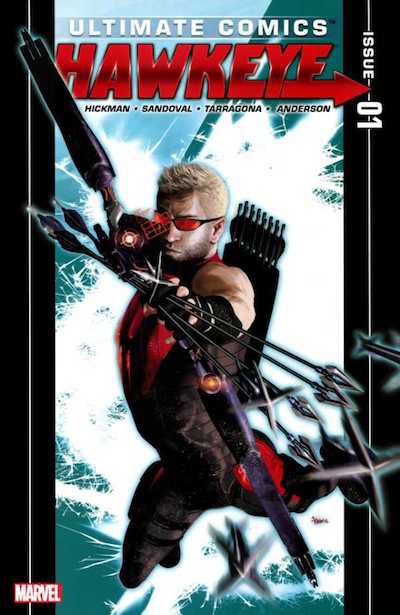 This is actually a pretty good look, even if it screams “circa 2010 discomfort with a superhero aesthetic” as loud as it possibly can. But those sunglasses are douche sunglasses. I’m pretty sure he borrowed them from Roy Harper, actually.

Back in the main universe, Clint went back to a variation on his classic look: 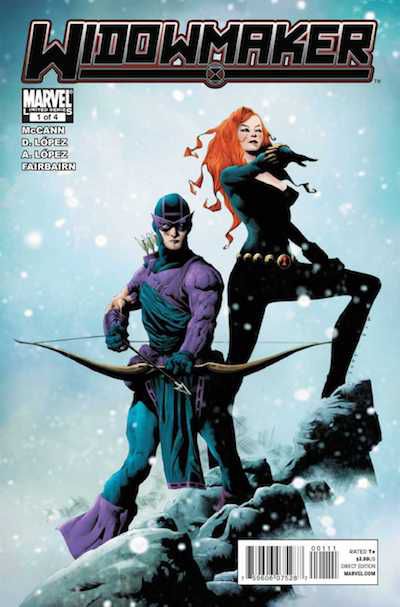 The flop on those boots is beyond. I can’t. I will never get over those boots. Dig the asymmetry, though! (In some art the left arm is metal. Again, I don’t know why he has a Winter Soldier arm, but he has tried very hard over the years to be Captain America’s sidekick, so maybe he’s hoping this will work on Steve subliminally.)

And now, the moment you’ve all been waiting for: the Fraction/Aja run. 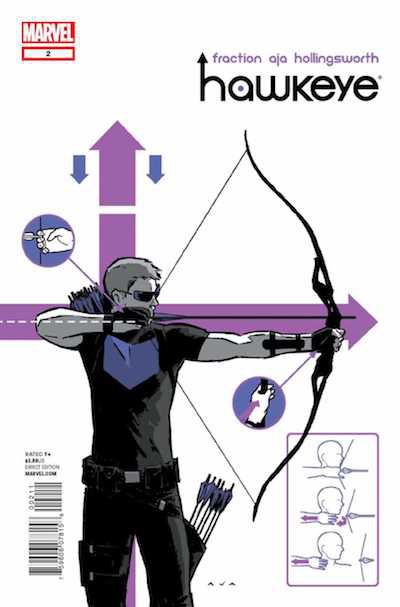 Okay, I’m breaking my rules for Fashion Disasters, which is supposed to feature characters who have never had a good costume, because this? This is a good costume. (I’m pretty sure between Goliath and the miniskirt, Clint’s still earned his place on the list.) Normally I don’t like street clothes on most heroes, but Clint’s such a shambles of a man that it works, especially since his shtick is low-tech, real-world weaponry. The iconography is bold but understated. The archery gear is all correct. (Love the double quivers!) There are straps and pouches but I understand why they exist. Though Aja draws this very simply, other artists have altered this costume (which Clint has been wearing since 2012) to be more tactical, and it still works. It’s a good, good costume.

But if Clint ever gets tired of it, I guess there’s always dystopian future hobo-chic: 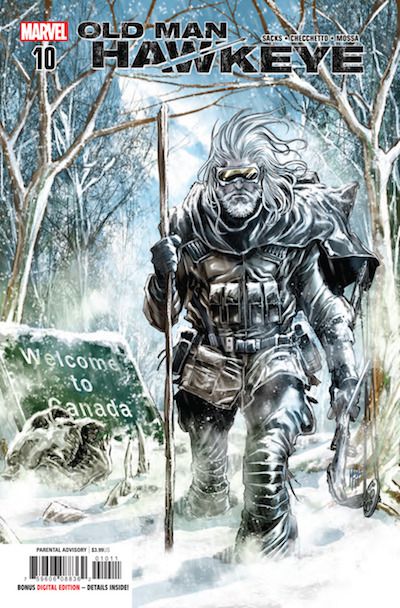 Oh, and I would be remiss if I didn’t give a shout out to this hot little number: 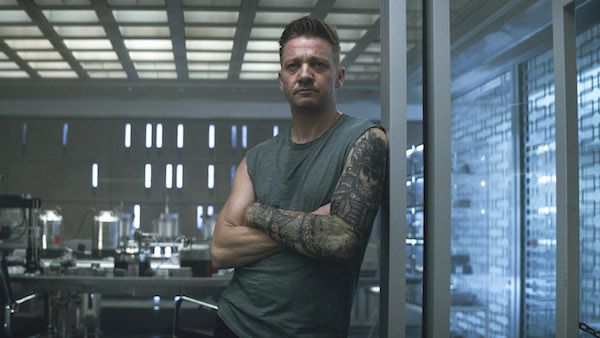 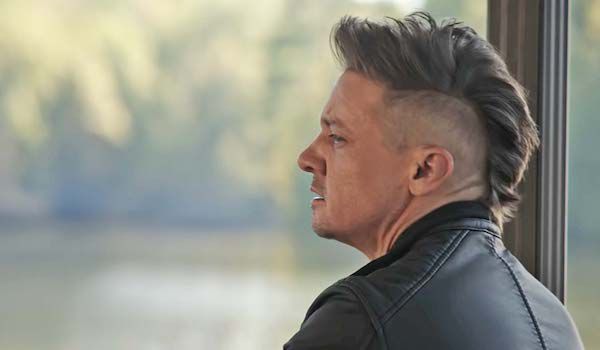 1. Purple-on-purple is a bad look.

3. I do not understand why literally every female Avenger has dated Clint.

In conclusion: get it together, Clint, you have children looking up to you.