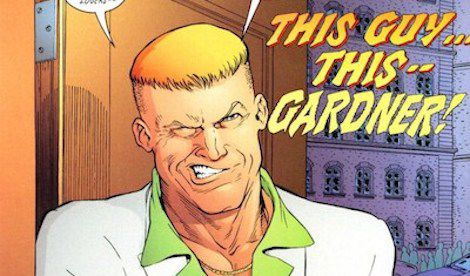 Here on Fashion Disasters, we’ll showcase those poor slobs who just can’t seem to get it right. Today: Guy Gardner!

At first, Guy might seem like an odd choice for this feature. I mean, sure, his classic look is endearingly dreadful, but he’s been wearing it since 1986, and Fashion Disasters is meant to highlight characters who’ve worn a succession of awful costumes. 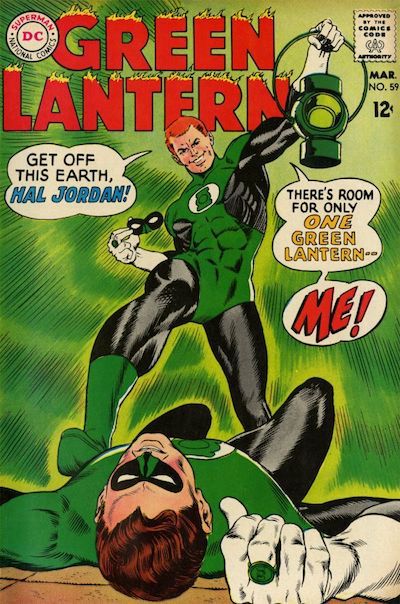 I can’t complain about this. Hal may be a human popped collar, but his look is one of the all-time greats, and Guy wears it well, even if the red hair makes it a little Superhero Irish Spring. But of course this is Hal’s classic look, and so we can’t give Guy any credit for it.

No, Guy’s first superheroic sartorial choice came a bit later. Like most people, meeting Hal Jordan destroyed his life: he promptly got hit by a bus while falling off a cliff, ended up in the hospital, got engaged to a woman with the implausible name of Kari Limbo, had a Green Lantern battery explode in his face and put him in a coma, watched Hal and Kari hook up while he was totally paralyzed and believed comatose, was mentally tortured by General Zod, and was manipulated by renegade Guardians into trying to destroy the Earth, before finally getting to properly join the Green Lantern Corps. No wonder he ended up cranky.

When Guy finally got the chance to debut his own costume, here’s what he came up with: 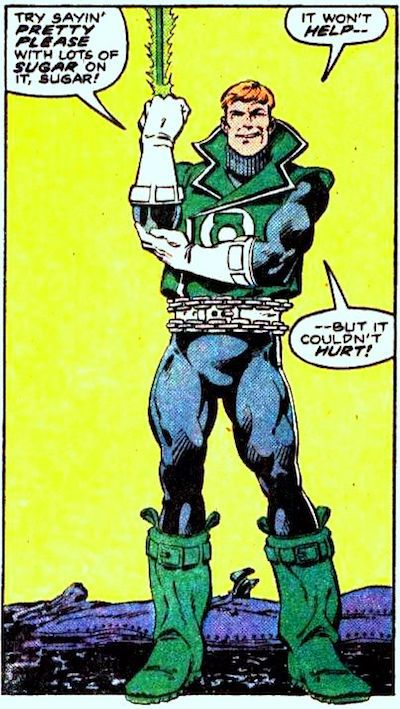 Let’s take it from the top, shall we?

…I love you so much, Guy Gardner.

“But Jess,” you’re saying, “that’s the costume he has now, essentially! What’s all this about the ’90s?”

My friends. THIS is all this about the ’90s: 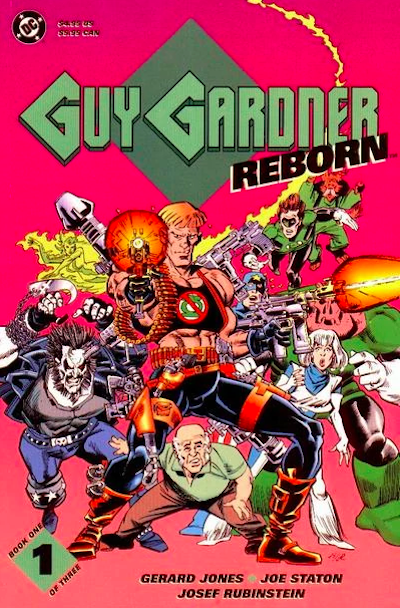 Short version: Hal took Guy’s ring away and Guy had to come up with a new look. Long version:

The cropped “No GLs” tank top! The cowboy boots! The baffling weaponry! The, uh, whatever’s going on in his groinal region! Oh Guy. Oh darling. WHY.

Guy only sported this look for a miniseries before settling on a new semi-permanent ensemble: 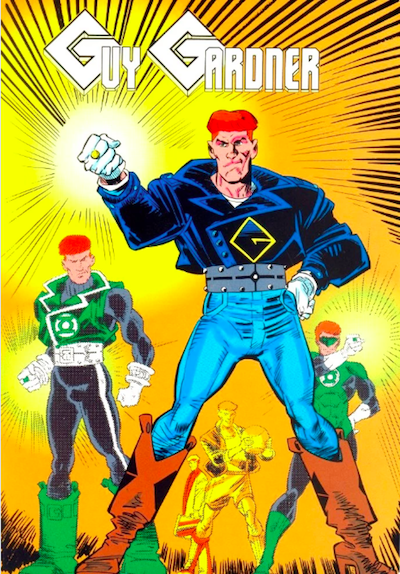 This is basically a non-GL version of his GL look, and so is exactly as dumb as that look is. How did he tuck his jacket into his belt like that?

A little over a year later, Guy decided that since he was no longer a Green Lantern, he needed a new codename—and a new look to go with it. Enter Guy Gardner: WARRIOR: 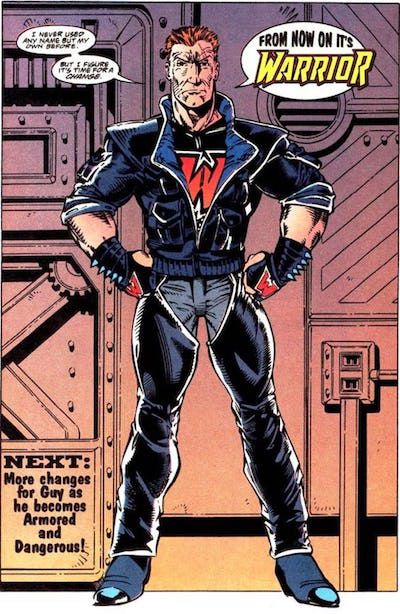 I didn’t realize Christina Aguilera was such a big Guy Gardner fan, but like, me too, girl.

You might be thinking, “This can’t possibly get worse.” But friend, this is the ’90s. Of course it can.

See, soon after donning his new codename, Guy drank from a mystic river in the Amazon (sure) and discovered that he was actually the last surviving member of an alien race called the Vuldarians (yep) and had inherent powers, which mostly involved being able to turn his arms into guns, because the ’90s (okay). Naturally this called for yet another new ensemble: 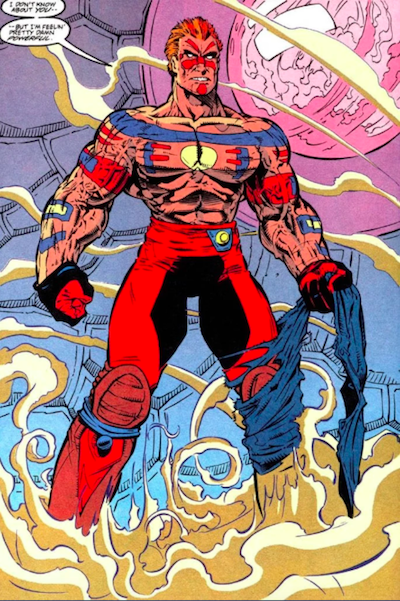 Here’s my question: why was everyone in the ’90s so into tiny gloves? Why was that such a trend? It’s so specific and so weird!

The less said about Guy’s fakey “tribal” tattoos (which he could disappear at will), the better. And why did he only don kneepads after he became a shapeshifter with enhanced durability? *sigh* At least he’s got a decent haircut for once?

Oops, I spoke too soon:

As the decade waned, so did Guy’s Vuldarian heritage, until it was quietly pretty much forgotten in favor of him being the owner of a superhero-themed bar called “Warriors” that got destroyed in weekly brawls. Mostly he just wore a Warriors t-shirt during this era, although we did briefly get this killer look: 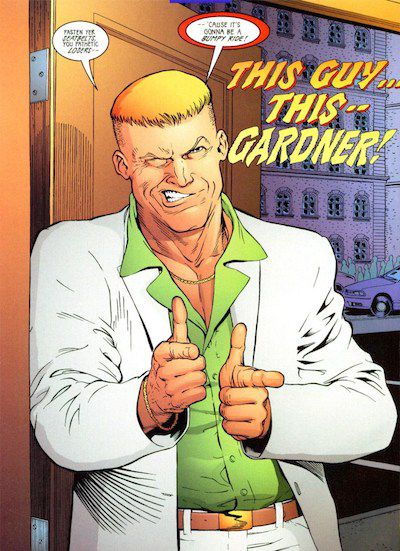 I know it’s not a superhero outfit, I just love it so much.

Shortly thereafter, Hal Jordan returned (yawn) and Guy went back to his classic Green Lantern look (with…slightly better hair) and forgot that he owned a bar and could turn his arms into guns: 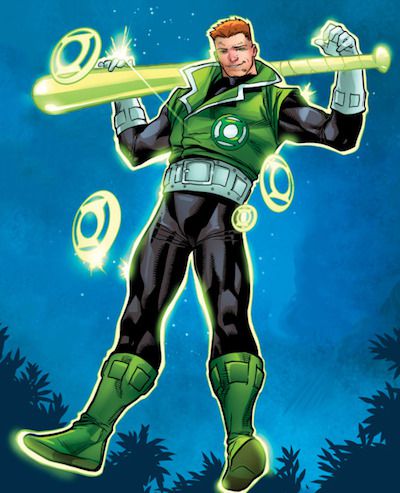 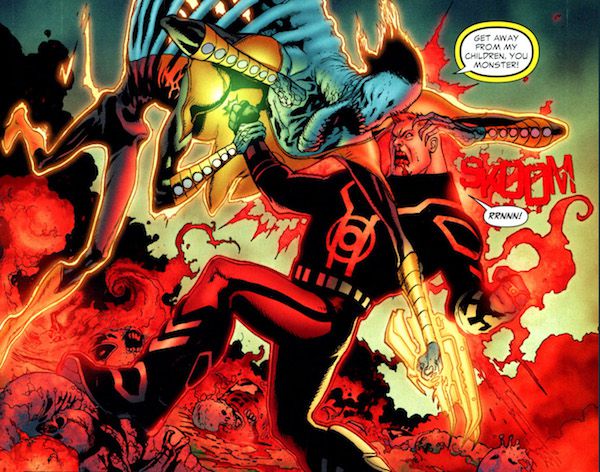 I mean. I guess this look isn’t terrible, but there’s really no way to make “gets mad and vomits blood all over everything” look good. It’s the modern equivalent of “can turn his arms into guns,” really. All he needs is the tiny gloves.

After Guy calmed down a bit, he decided to make the Red Lantern look his own, with…mixed results: 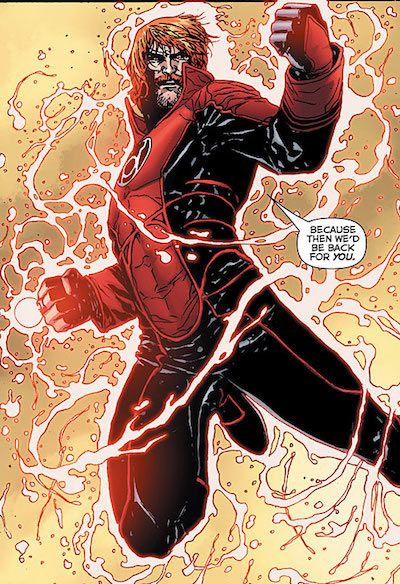 My boy loves popping those collars! Again, the costume itself isn’t bad, but the ‘stache/hair/weird cheek buttresses really, really are.

These days, Guy’s mostly back in the green, although sometimes he balances both rings for a fun Yuletide look: 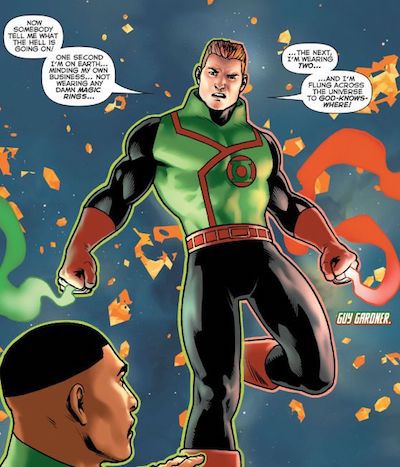 So festive! So clashy!

Also, back in 2017 he briefly dusted off the old Warrior gear, which made me happy as I unironically love that terrible series: 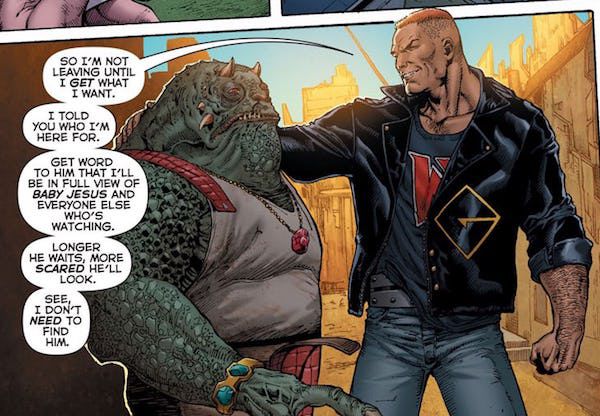 Now that Grant Morrison is Grant Morrisoning up the Green Lanterns, it’s anyone’s guess whether Guy will continue to sport his classic godawful look or pick up a new godawful look. But I think we can trust that whatever he wears, it will be gloriously, joyfully wretched.