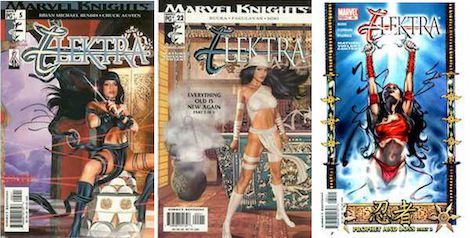 Here on Fashion Disasters, we’ll showcase those poor slobs who just can’t seem to get it right. Today: Elektra!

Elektra Natchios is our first female Disaster, and she is a perfect example of the difference in how men and women are drawn in comics. With male Fashion Disasters, it’s “Aw, he looks like a dingdong again! What a noodle.” With female Fashion Disasters, too often it’s “I didn’t know they could take even more clothing away from her, but somehow they did.” So brace yourselves. 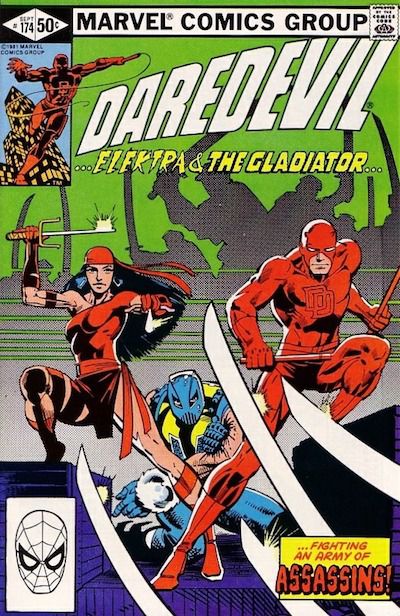 So yeah, right off the bat this look makes zero sense. First of all, she is both Greek and a ninja, but this costume evokes neither of those things. Second, she is, again, a ninja, but she wears bright, eye-catching red. Third, there’s only one strap on her bathing suit, which means she can’t be wearing a bra, which means OUCH. (Memo to people who don’t have breasts: when you jump around stabbing people with no breast support, it hurts.) Fourth, what is the purpose of the bandana and random straps around her arms and legs? Fifth, why would someone who lives such a dangerous lifestyle have so much exposed skin? (The perennial question for so many female heroes…) Sixth, relatedly, if you’re going to expose that much skin, why bother with gloves? Seventh, are those heavy dangly earrings? Does Elektra hate her earlobes and dearly wish for them to be torn open? And eighth, a loincloth??? I don’t even hate this costume that much because it’s so old and so Frank Miller it feels like a waste of time to hate it, but I’m exhausted and we’re not even past her first look.

Anyway, Elektra died. Then she came back! But she was “pure” now! (Barf.) So her costume was white! 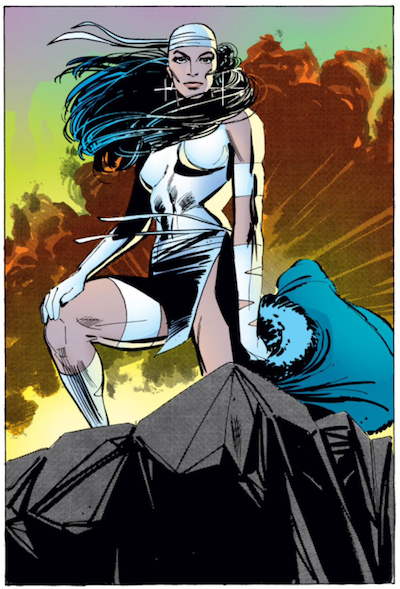 She’s on top of a snow-covered mountain. Isn’t she cold? 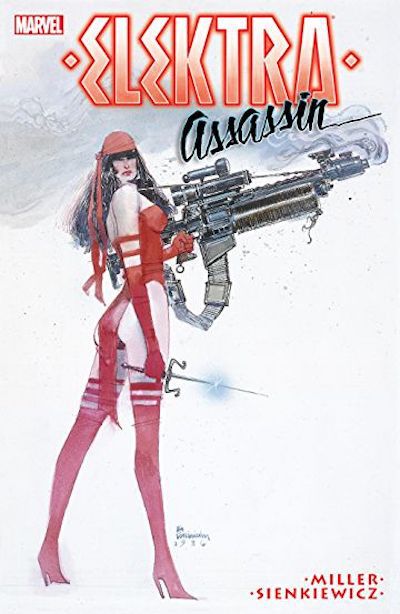 As you can see, the longer Elektra wore her classic costume, the higher her heels got and the more of her butt we got to see. (This story takes place before her death but was published after her resurrection, hence the red.) 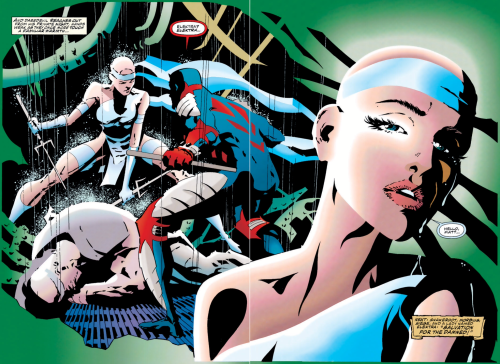 Meanwhile, her resurrected self spent a while meditating and shaved her head I guess? Don’t worry, she has cascading locks like a week later in continuity.

Bonus! Though Elektra came back from the dead pure, all of her evil bits remained inside the mind of a S.H.I.E.L.D. agent she had possessed, and the Hand managed to suck all those bits out and turn them into a person, named Erinys, aka Sexy(er) Evil(er) Elektra: 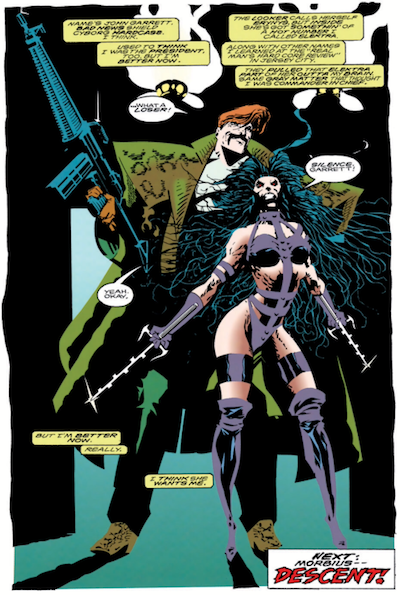 Anyway, merging her two selves required a return to the red: 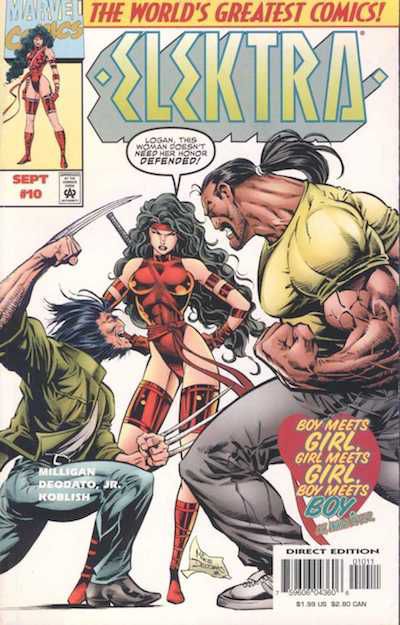 See, I told you the hair would come back!

The anatomy in this is…astonishing, but I will say that I appreciate the new and improved neckline of her costume. It won’t fall down! She could theoretically wear a bra! It’s an improvement! Plus, I always like a good headband. I mean, this isn’t a good headband, but it’s evocative of one.

The thing is, since Elektra’s costume is basically just “a bathing suit and some random straps,” and since she was treated more like a pinup fetish object by Marvel than an actual character, the details of her look get tweaked a lot, mainly to satisfy whatever the artist will think is hot in any given moment. For example, here are three covers from her second solo series, all of which were published within three years of each other: 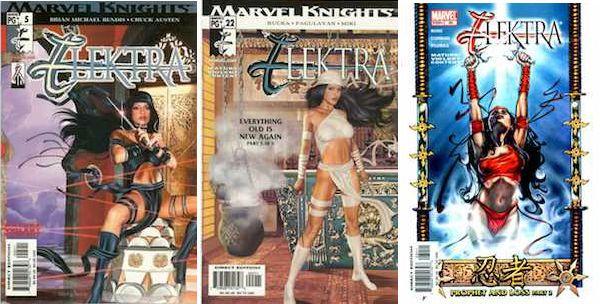 Meanwhile, over in the acclaimed Bendis/Maleev run on Daredevil, she had more firmly adopted the midriff-baring look: 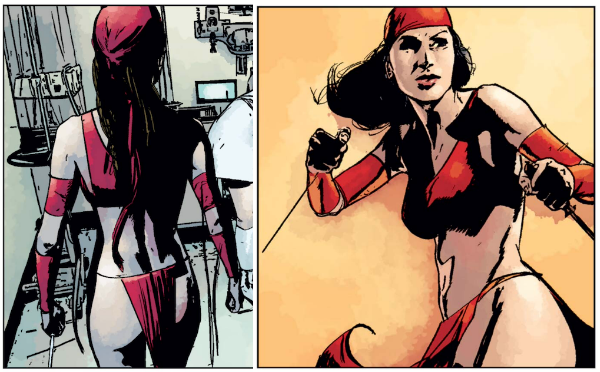 There you go, fanboys: she’s naked (and…groomed) Under There. But remember, this is a Serious Comic Book for grownups!

Around this time, Marvel launched their Ultimate universe, shaking things up with an all-new all-different approach. For Elektra, this meant a very exciting change: PANTS! 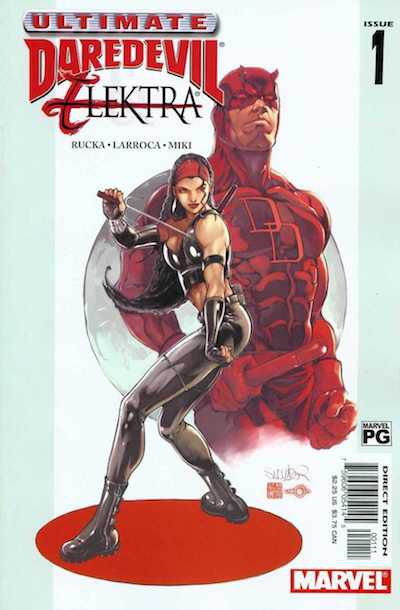 Yes, our girl got her very first pair of pants, which is kind of a miracle, even if she had to pair them with a very uncomfortable-looking bustier. Later the look shifted to red but remained otherwise the same: 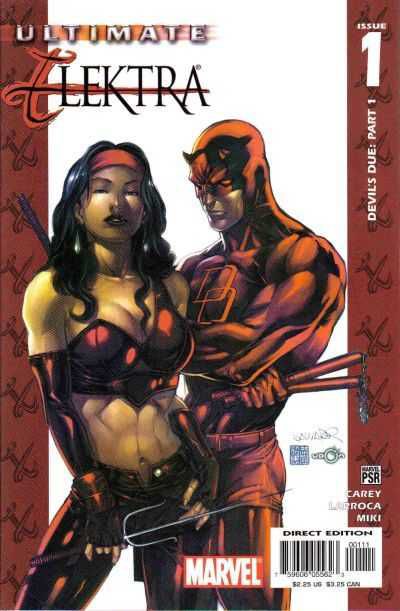 Again: girl, those earrings are a bad idea.

A later development brought the equally thrilling concept of sleeves: 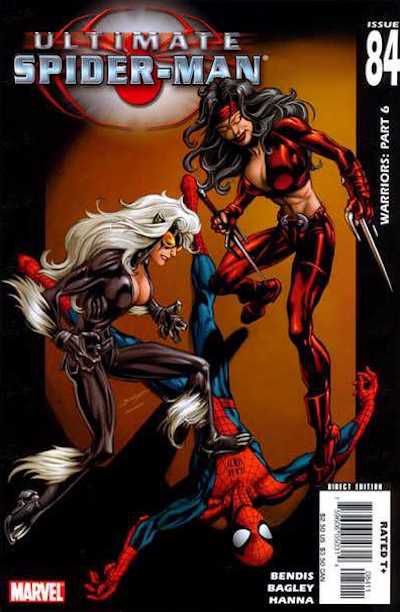 The sudden appearance of remotely plausible clothing had a lot to do with Marvel having to put an actual human woman in an Elektra costume thanks to the infamous Daredevil movie. 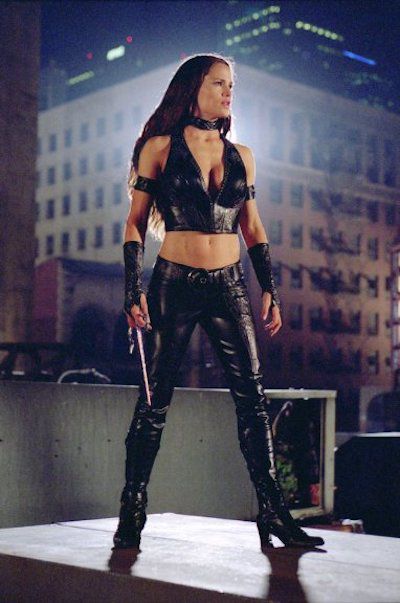 I mean, that sure is 2003. Like, it’s 100% what basically any “badass action chick” would have looked like in 2003, so I’m mainly just annoyed that it’s so generic. Complaining about the cleavage and bare midriff when Ben Affleck was poured into head-to-toe vinyl and Colin Farrell just wore, like…clothes…feels exhausting at this point.

I will say that the choker and upper arm cuffs seem arbitrary and somewhat impractical, but that’s Elektra for ya, baby!

She went a bit more classic for the even more infamous sequel, Elektra: 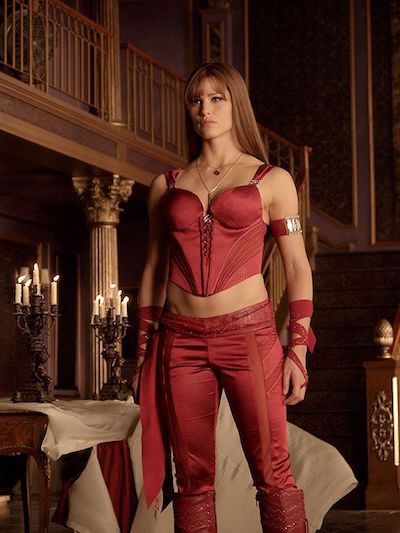 Okay, the top is just lingerie now. And what’s with all the ribbons? And those hilarious bedazzled boots? Elektra is not a bedazzler-er, she is a beheader! (WINK.)

She did get a pretty dope coat though: 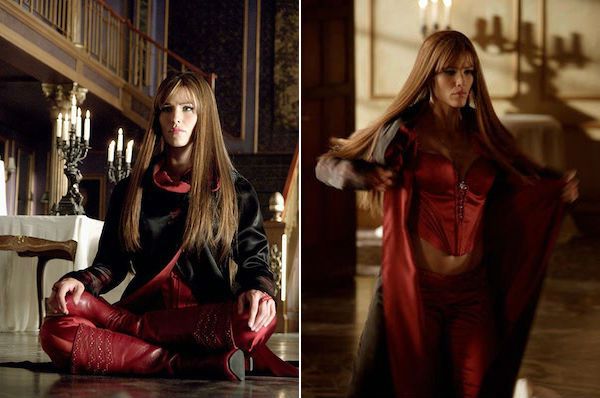 Back to the comics! Over in the main universe, Elektra mixed up her color palette again: 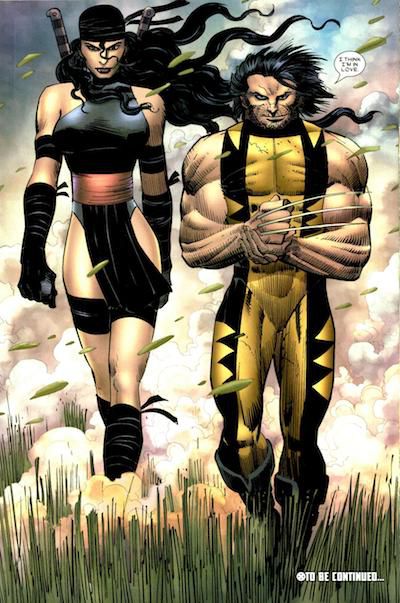 You know what? If we have to have a variation on Miller’s awful original design, I kind of like this one. The black seems marginally more appropriate to her character, but the red sash keeps it from being one of the lazy color swaps we saw before. I’ll allow it.

What I will not allow, however, is this: 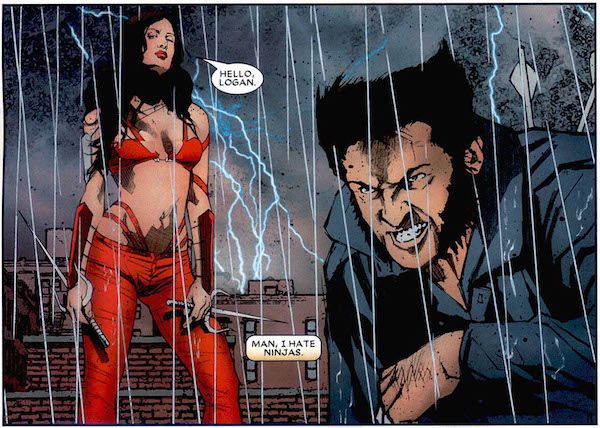 If I hadn’t told you this comic came out in 2005, you could have guessed, right? Like, man. A double whale tail. That’s such an impressive degree of artistic desperation I almost missed whatever the hell is happening with the bra.

Meanwhile, in the “Mangaverse”… 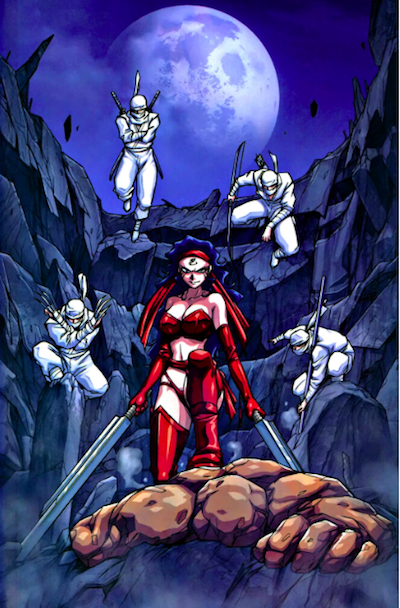 …You know what, forget it, let’s just move on.

Punisher MAX brought us an improvement on Elektra’s costume design, if not her writing: 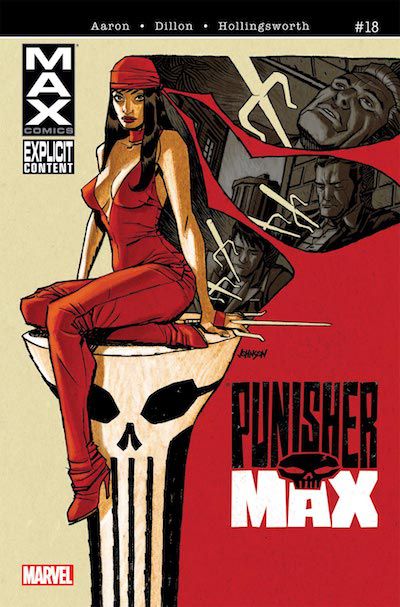 This one is actually pretty good! I mean, I wouldn’t want to have to fight in it, but she looks genuinely appealing and not “What if I put another strap here, would that make it sexy?”

But the biggest change came, of course, when our girl appeared in Season 2 of Netflix’s Daredevil: 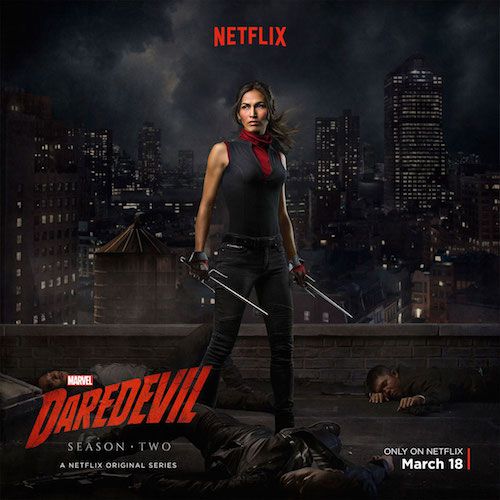 Ahhh, bask in it. Hair pulled back! Comfortable clothing she can move in! Black to blend in to the shadows but a pop of red to evoke her classic look! The bare arms are clearly a concession to “Okay, but she’s a woman, so we need some skin,” but I’m not going to split hairs. This is good and I like it.

I liked her “upgrade” less: 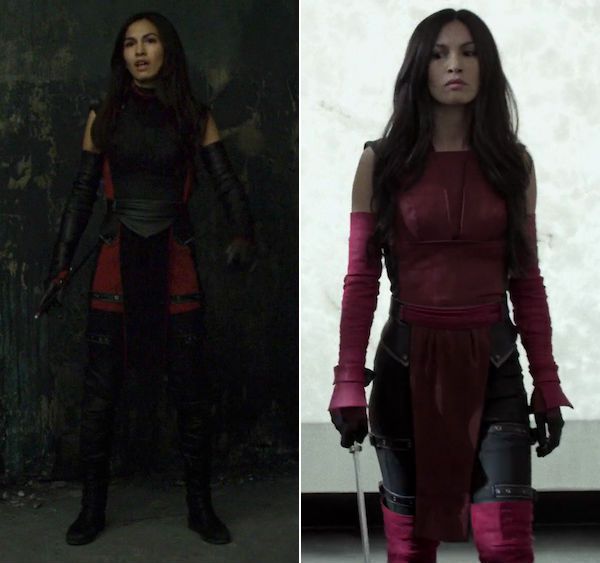 Okay, I see what they were going for on the left here—the loincloth, the straps, the pop of red. They’re trying to make the same transition they did in Season 1 from Matt’s black pajamas to the full Daredevil costume, without actually putting this poor woman in the classic Elektra costume. And the paneled belt and hanging panels of fabric are evocative of samurai, which fits in with Season 2’s troubling “throw everything East Asian we can at the wall and see what sticks” approach. But it just seems—and I know I keep using this word—arbitrary, which is maybe the most Elektra thing of all. I mean, why would there be tiny straps around her upper thighs? Why are her upper arms exposed? They were trying something, but it didn’t quite land.

The look on the right, from after Elektra is resurrected in Defenders, has far greater success by just flipping the colors. Yes, I still hate those thigh straps, but something about the reversed color scheme and reconsidered lines just makes the whole thing significantly more cohesive. 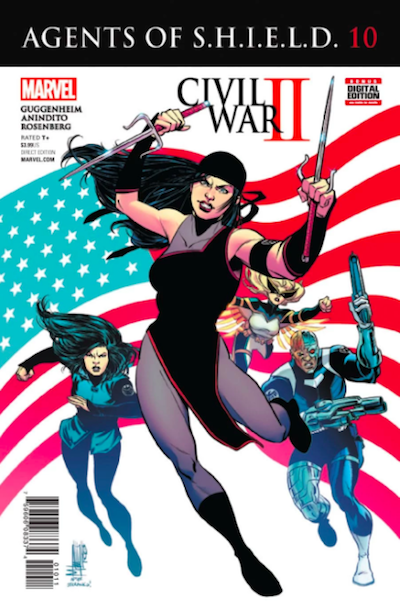 Nice try, but no.

Her TV appearances earned Elektra a new solo series, and for the very first time, she was also given a fully reimagined costume, in the main 616 universe, intended to be a permanent change! Not just stripping the color out or moving some straps around!

So how’d they do? 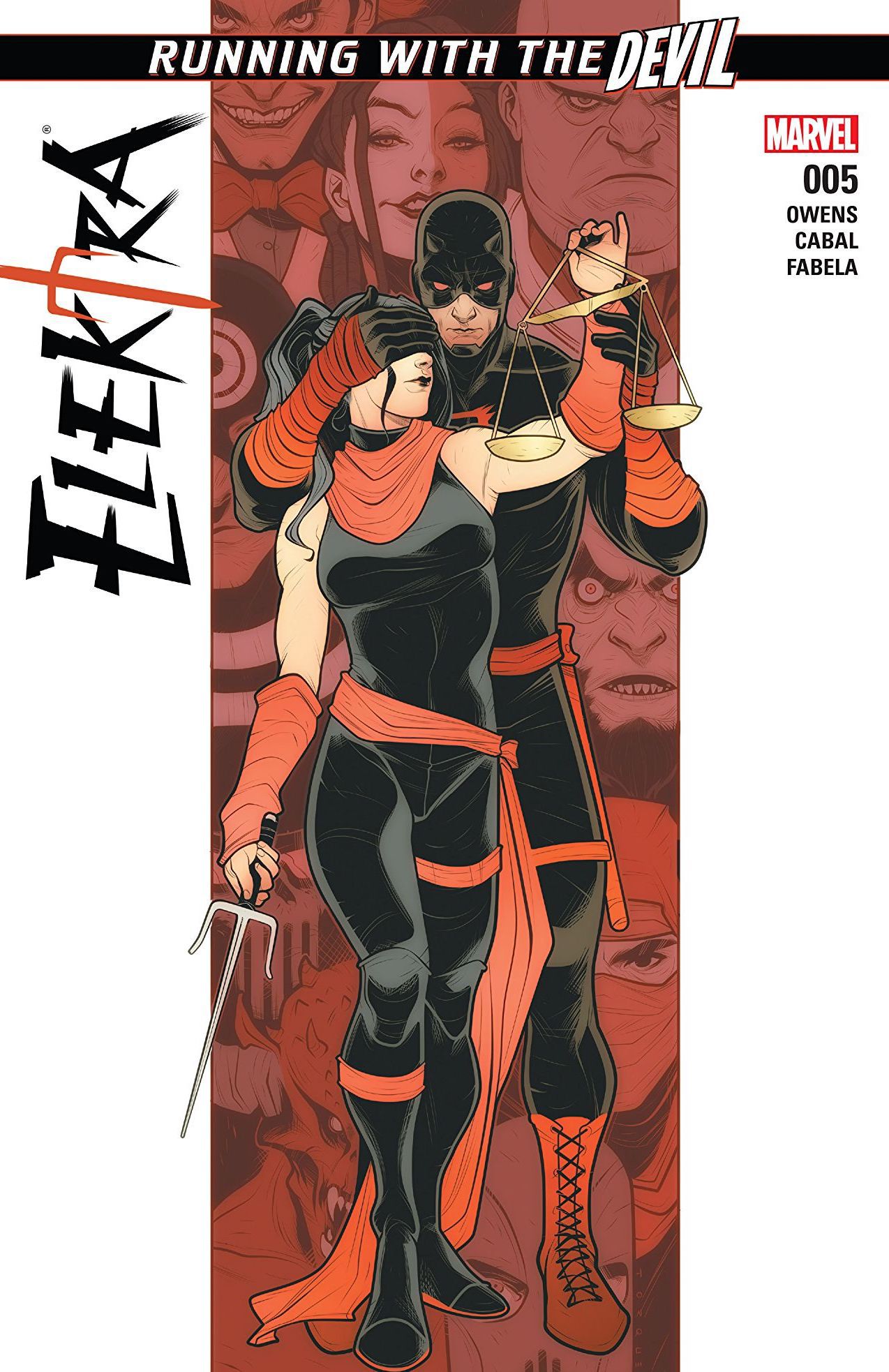 Ehhhhhh. Again, I can see what they’re going for (the first Netflix costume, basically), but it just kind of feels like “If I can’t make her sexxxy, why bother?” Black bodysuit. Red sash. Red straps. (ENOUGH WITH THE STRAPS ALREADY.) Put a little effort in already!

But hey—she’s completely clothed and it’s reasonably practical as far as superhero outfits go. I can’t complain that much.

Oh, what’s that? She’s appeared in another book since then? 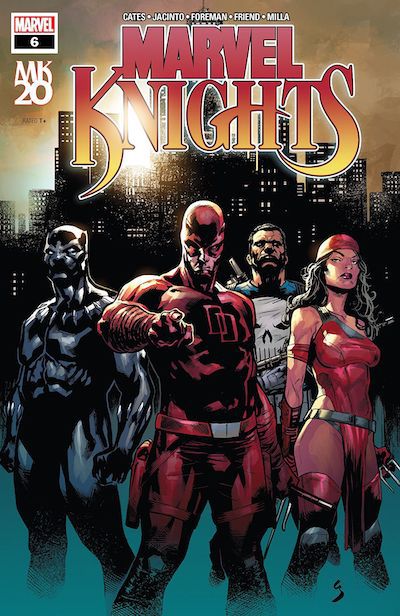 Well, it was nice while it lasted.

Elektra is a character who is desperately in need of being both written and drawn by a woman, neither of which has happened so far in her 38 year existence. Maybe if she ever does, she’ll get an outfit that has a guiding artistic principle besides it other than “Can I put this on a pinup calendar in the back room of a garage?”

Until then, hey. At least she stabs a lot of dudes.