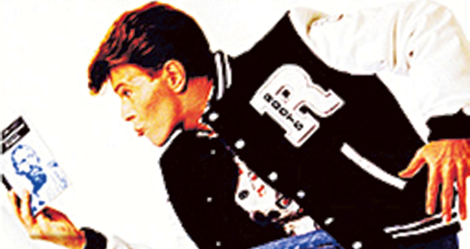 David Bowie was a prolific reader, so perhaps it’s not surprising that a book club in his name has been set up by his own son. Duncan Jones made the announcement on Twitter, referring to his father as ‘a beast of a reader’.

Alright gang! Anyone who wants to join along, we are reading Peter Ackroyd’s “Hawksmoor,” as an amuse cerveau before we get into the heavy stuff. You have until Feb 1. ❤️

Jones didn’t indicate a structure for his book club, but has selected the first book–Peter Ackroyd’s Hawksmoor, and set a completion date of February 1st for anyone who wants to join in.

According to The Telegraph in London, Bowie himself travelled with his own library, books encased in cabinets that developed into an amazing collection over time. He credited his own parents with his fascination for books and noted that reading Kerouac’s On the Road inspired him to get out of Bromley when he was a teenager.

In 2013, the David Bowie issued a list of Bowie’s 100 favourite books, following the inclusion of the list in the David Bowie exhibition in Ontario. Given that Hawksmoor features on that list, Jones appears to be attempting to fulfill the legacy of reading his father left behind.

Hawksmoor, an award winning novel published in 1985, tells a parallel story of Nicholas Dyer and Nicholas Hawksmoor. In the 18th century, Dyer engages in human sacrifices to build churches in London. In the 1980s, Detective Hawksmoor investigates murders in those same churches.

Some of the books on Bowie’s list are beloved the world over- A Clockwork Orange, The Stranger, The Prime of Miss Jean Brodie , Lolita, The Great Gatsby and In Cold Blood all feature, alongside some more unusual pursuits- Transcendental Magic, Its Doctrine and Ritual among them.

It’s impossible to know what book Jones will pick next (or how long he will allocate for each reading), but one thing is for sure- Bowie’s fans will tag along for the ride.

You can see the list of 100 Books on David Bowie’s website here, from 2013, and you can read more about bookish David Bowie here.