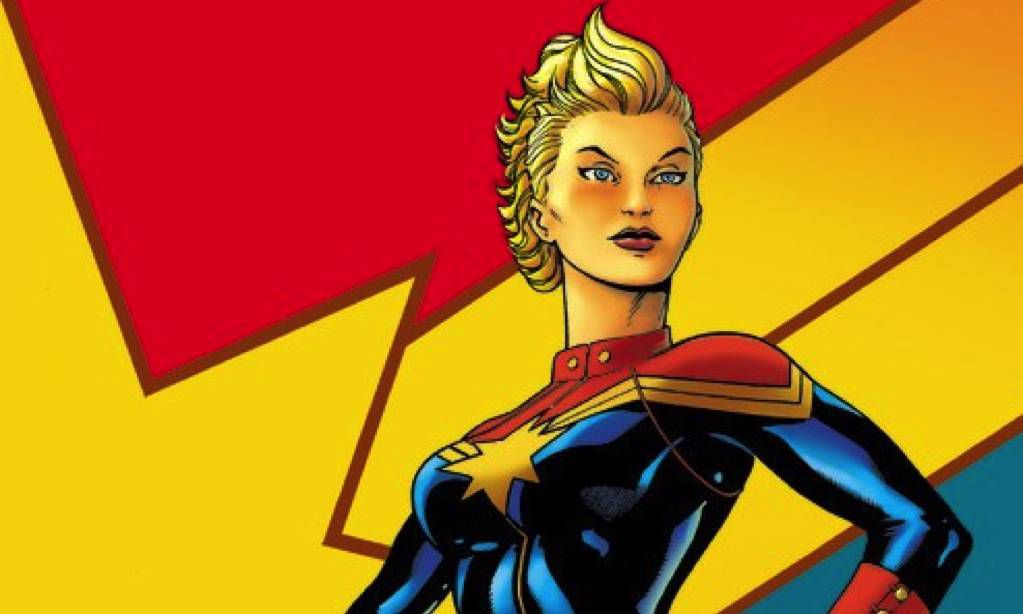 Strap in, folks. This is probably going to be the most convoluted Who the Heck yet, spanning 9 decades, 10 characters, and 5 different publishers. But I believe in us! We can do it! 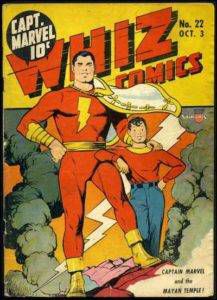 In 1939, inspired by the success National Comics (which would become DC Comics) had with characters like Superman and Batman, Fawcett created their own superhero. Their brainchild, however, was to make their hero an actual child: an orphan named Billy Batson, who was granted the power of the gods by a wizard and became the mighty Captain Marvel when he spoke the magic word “Shazam!”

It was a hit. Captain Marvel became the most popular superhero of the Golden Age, and the franchise was rapidly expanded with Billy’s twin sister Mary (Mary Marvel) and friend/sidekick Freddy Freeman (Captain Marvel, Jr.). He was also the first to make it into live action with the Adventures of Captain Marvel film serial.

Billy even outsold the wildly popular Superman. National/DC couldn’t have this, of course, so they sued Fawcett for copyright infringement, claiming that Fawcett’s dark-haired flying strongman was a copy of their dark-haired flying strongman. The case dragged on for 12 years, but eventually a judge concluded that the Big Red Cheese was an illegal copy of the Big Blue Boy Scout, and Fawcett was forced to cease publication of Captain Marvel. The company promptly folded.

Vulture-like, DC would eventually snatch up the rights to Billy ‘n’ friends. But in the meantime, another contender stepped into the ring… 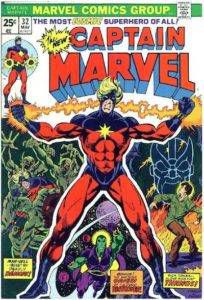 With no one publishing Billy Batson stories and the name “Captain Marvel” just sitting around unused, Marvel thought it would fit them better for obvious reasons. So they snagged the trademark with the publication of Marvel Super-Heroes #12 in 1967, which introduced Mar-Vell, an alien superhero (Kree, specifically) who took Earth under his space wing. He took the human alias Walter Lawson and hung out with characters like Rick Jones and Carol Danvers, the latter of whom developed her own powers when a device called a Psyche-Magnetron exploded and turned Carol into the human-Kree hybrid known as Ms. Marvel.

Mar-Vell was not a particularly successful hero, and in the early 80s became one of the first (and still only) superheroes to die from mundane causes (cancer). He was immediately replaced by… 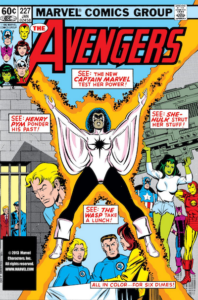 Monica was an officer in the New Orleans harbor patrol when she encountered an extra-dimensional weapon that left her with the power to change her body into energy. She took the recently vacated name “Captain Marvel” and promptly became the first African-American woman to join, then lead the Avengers, because she’s just that good. However, Mar-Vell’s son Genis-Vell took over the title in the early 90s, so Monica changed her codename to Photon. Then Genis-Vell took that name, so she renamed herself again, first as Pulsar, then Spectrum. She mostly goes by her real name these days anyway. 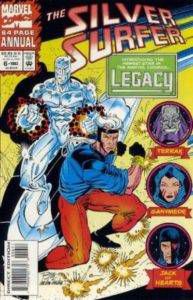 Genis-Vell’s mother Elysius, an Eternal, managed to have a son with her dead lover Mar-Vell post-mortem, then artificially aged him and convinced him he was the son of Starfox, because Marvel Cosmic is weird as heck. Genis went by Legacy until he found out the truth, then did the codename dance with Monica mentioned above. Eventually his teammate Baron Zemo saw a future timeline where Genis destroyed the world, so he killed Genis in order to prevent this future from coming about. Genis will presumably return eventually and attempt to call himself Monica Rambeau, if history is any guide. 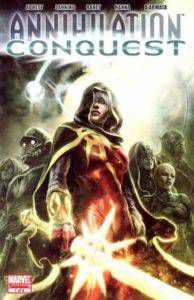 Oh, those wacky Vells! So, one time Genis remade the universe, like you do, and being a lonely only, he created a little sister for himself. She briefly tried to take the Captain Marvel title during a period where Genis went insane, but these days mostly goes by her own name or Martyr while kicking it with her girlfriend Moondragon. 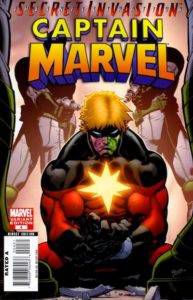 During the first Civil War storyline, a Skrull warrior named Khn’nr was sent to Earth as a sleeper agent, and—due to implanted memories—genuinely believed himself to be a resurrected Mar-Vell.

Even after learning the truth, he fought on the side of Earth until his death, and passed the mantle that was only kinda his on to… 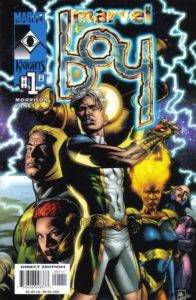 Noh-Varr was an ensign on a Kree ship who ended up on Earth when his ship was shot down. He took the codename Marvel Boy, but switched to Captain Marvel when he joined Norman Osborn’s Dark Avengers team—basically a roster of A-list wannabes, and mostly evil ones at that. Once he realized all his teammates were supervillains, he quit and changed his codename to Protector. He loves 60s girl groups. 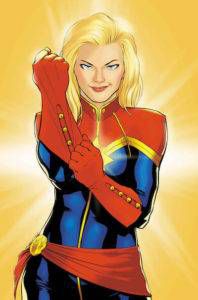 I know, I know—this is what you’ve been waiting for. The daringly named Ms. Marvel (“Ms.” being an explicitly feminist prefix in 1977, as opposed to “Miss” or “Mrs.”) fought the good fight for several decades. She suffered several traumatic events, like being brainwashed and forcibly impregnated by a villain named Marcus,, then having a rapidly aging child who turns out to also be Marcus (AUGH WHY NO), or being taken over by an alien species called the Brood and becoming the energy manipulating hero Binary. All this took its toll, and after returning to her original set of powers and changing her codename to Warbird, Carol was shown to have become an alcoholic, and is still portrayed as being in recovery today.

Carol played major roles in Civil War and Secret Invasion (as Ms. Marvel again). In 2012 she finally took on the Captain Marvel name in a much-lauded revamp by Kelly Sue DeConnick and Dexter Soy, and has been considered a heavy hitter for Marvel ever since. (The Ms. Marvel codename went to everyone’s favorite squishy muffin, Kamala Khan.) Carol will be the first female lead in a Marvel Studios film, played by Brie Larson and releasing in 2019 (allegedly). 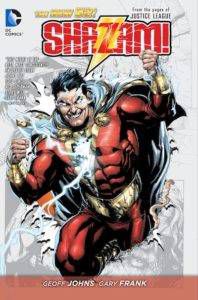 Oh, did you think we were done? Oh my sweet Kree child, no.

In the early ’70s, 20 years after forcing Fawcett to stop publishing Captain Marvel stories, DC licensed the rights to the character and started publishing Billy books themselves. Unfortunately for them, they were just a hair too late to preserve the trademark, which now belonged to Marvel (and Mar-Vell), and so DC had to publish all of their Captain Marvel comics under the title “Shazam!” By the early ’90s they had gained all rights to Billy ‘n’ company, but they still don’t have that title trademark.

For simplicity’s sake, DC gave up and renamed the character Shazam with their 2011 New 52 reboot. Both Billy and his sidekick Freddy have used the names “Captain Marvel” and “Shazam.” Freddy is rarely seen now but mostly goes by Shazam, Jr. (Fun fact: Freddy was Elvis Presley’s favorite comic book character, and the King styled much of his aesthetic after the Marvel Family.)

A Shazam! movie—not to be confused with Marvel’s Captain Marvel movie—is also releasing in 2019 (allegedly). That won’t be baffling to anyone, I’m sure.

Hang in there, folks, we’re in the home stretch! 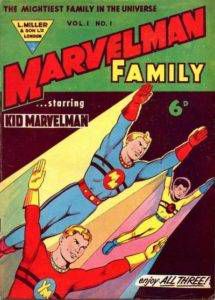 While Fawcett was still publishing Captain Marvel stories, a British publisher called L. Miller & Son published licensed black and white reprints for the UK. When Fawcett closed up shop in 1953, Miller decided to continue by changing the lead character’s name to Marvelman. This went on for a decade.

In the 80s, Alan Moore revived the character, first in Warrior Magazine, then with Eclipse Comics. Marvel Comics objected to the name, so Marvelman was changed to Miracleman. Eventually, Marvel went ahead and obtained the rights to all Marvelman/Miracleman stories. So now both DC and Marvel have their very own version of the original Captain Marvel, neither of which has anything to do with the current Captain Marvel.

And that’s all the Captain Marvels! (Captains Marvel?) For more on Carol, check out this primer by CP; for more on Billy’s Golden Age adventures and early film serials, I’ve got a review for you here. You can follow Carol’s continuing adventures in The Mighty Captain Marvel (soon to be retitled as simply Captain Marvel as part of Marvel’s Legacy initiative) and Noh-Varr’s in Royals; you should also keep your eyes peeled for Phyla-Vell in Guardians of the Galaxy-related titles. Billy is not regularly appearing anywhere—a sad comedown for the kid who used to be the biggest superhero in the world. Bring back Shazam, DC!