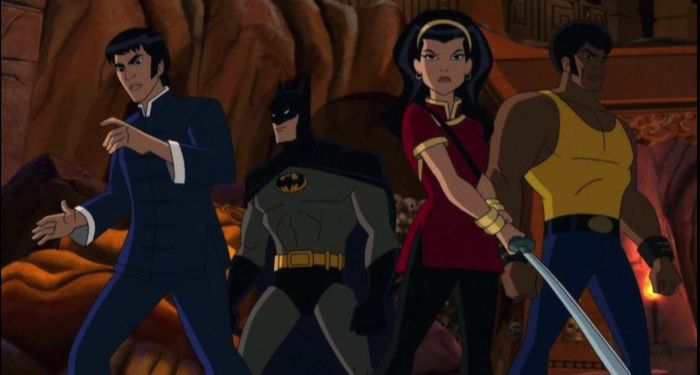 It’s been a minute since we went took a look at a hero from the Big Two, but DC graced us with the trailer for a new Batman animated feature film last week, the ’70s-set, uber-groovy Batman: Soul of the Dragon set for streaming release January 12, 2020, and DVD release on January 26. Directed by Sam Liu, the newest Elseworlds story finds Bruce Wayne training in martial arts under a world renown master with DCU brawlers Ben Turner/Bronze Tiger (Michael Jai White), Shiva (Kelly Hu), and Richard Dragon (Mark Dasascos).

The big news here is Dasascos, who you may know from such business as the Chairman on the American version of Iron Chef and, much more importantly, Eric Draven from The Crow: Stairway to Heaven and Mani from Brotherhood of the Wolf. Born in Hawaii, Dasascos family has roots in Japan, China, and the Philippines as well as Spain and Ireland. Why does it matter? We’ll come back to it. First, let me introduce you to the original Richard Dragon.

Not what you were expecting? Or, perhaps, exactly what you were expecting from a character created by comic book writer Dennis O’Neil and artist James R. Berry for their 1974 novel Kung Fu Master, Richard Dragon: Dragon’s Fists (which, color me surprised, you can apparently still obtain, should you wish to do so) under the combined pseudonym “Jim O’Neil” (don’t look at me like that, I didn’t do it).

O’Neil later adapted the character for DC as “Richard Dragon, Kung Fu Fighter,” a thief who trained in marital arts and ultimately decided to use his powers for good. Along with Batman, Shiva, Bronze Tiger, and Black Canary he is, in fact, considered one of the best martial artists in the DCU.

His original meeting with Bronze Tiger wasn’t one that foretold a long standing partnership; Dragon broke into the dojo in Japan (we’re going to let the whole Kung Fu-Japan-dojo thing slide, it’s the least of Richard Dragon’s problems) where Bronze Tiger studied to steal a jade Buddha, Tiger caught him and beat the crap out of him, and only afterward did Tiger’s teacher, O-Sensei, decide perhaps there was something worth teaching in Dragon. Later, the pair were recruited into G.O.O.D. (The Global Organization of Organized Defense. I’m shaking my head as I type that) and fought corruption, you know, globally. It was through one of their missions they met Sandra Wu-San who really need a man to show her the error of her ways because of course she did. After Richard performed this valuable service for her and instructed her in the spiritual side of martial arts because that is definitely the white dude’s job, she renamed herself Shiva (I swear this isn’t my fault) and became one of the world’s most deadly assassins. Tiger was brainwashed by the League of Assassins which meant at least he didn’t have to listen to Dragon’s crap anymore, and the band split up (aka, the book was cancelled).

Richard Dragon next appeared in 1980’s The Question after Shiva defeated Vic Sage in combat and referred him to her old teacher before their rematch. Dragon threw in some “Eastern Philosophy” for free. I’m sure Sage appreciated it. There’s some really horrifying “brain convincing your body you’re disabled as a trauma metaphor” crap, Sage gives up on the city in his charge and everyone is really depressed except for Shiva, who stands on a hill and watches everything burns.

I’m not going to talk about the Oracle stuff because it reminds me that I’m a swarm of rage bees in a hoodie and Aizawa Shota lounge pants.

The Question brings Huntress to Dragon when she needs assistance clearing her name for a series of murders. People keep doing that. I’m at a complete loss as to why.

Chuck Dixon “revamped” the series in 2004, making Dragon a bullied kid who enrolls in a scam dojo to better himself. When his teacher gets his ass handed to him by Bronze Tiger, Dragon asks Tiger to train him. He meets Shiva and falls in love with her. Their relationship is…not the stuff of legend. The series was cancelled after 12 issues making us, comics readers, the real winners.

Dragon was made a legacy character with the initiation of the New 52 when Jeff Lemire introduced a villain who went by the same name and was ultimately found to have trained with, and then murdered, the original Richard Dragon. This second incarnation made his screen debut on Arrow.

So, what we’ve looked at here is DC’s Danny Rand. Who we in the 21st century know was a Bad Idea. And who, in his screen debut, gave us even more reason to slap. Really hard. In the brain. Because here’s what Marvel didn’t do: make any sort of effort to remove the colonizer vibe from a character who invaded a culture that doesn’t belong to him.

Here’s what it looks like DC appears to have made an attempt to do. That. From what we’ve seen in the trailer, this revamped Richard Dragon is to be of “Asian” descent at minimum (he actually looks a like a very tall Bruce Lee—who appeared in both Marvel and DC books, as well as the Mortal Combat comic and several others back in the day, BTW. Peep those eyebrows). What they need to have done to convince me they actually care is to have made the character from a specific country that is named at least once in the course of the film because *hand wave* Asian is not A Thing (even if it’s a DC-named country). The other element DC has included that gives me some hope is that they have hired an actor of Japanese, Chinese, and Filipino decent to voice the new Dragon, a Black actor to voice Tiger, and a Chinese American actress to voice Shiva.

Guess we’ll find out if it’s the real deal on January 12.