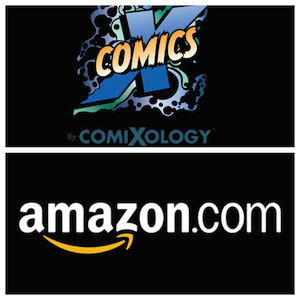 It might not be as exciting as flying robot delivery drones, but Amazon’s latest announcement is the purchase of digital comics retailer comiXology. If you’re not familiar with it, comiXology is a digital storefront for comics from almost every publisher. Once users buy their comics, they can read them online or through the iOS, Android, and Kindle Fire apps. ComiXology is the most-used platform for digital comics and was one of the top 20 highest grossing apps on iTunes last year. So it’s not really a surprise Amazon wanted to snatch them up.

While this isn’t really big news for Amazon, it’s pretty huge news for comiXology and the wider comics community. But I’m still pretty torn on whether or not this is a good thing for comics or a bad one.

I’m a Wednesday comics girl. I buy my books at my wonderful local comic shop each week. It’s a very comforting ritual for me, and I will always buy the majority of my comics from a brick-and-mortar shop. But some weeks are crazy, or I’m traveling, or a comic is sold out and I’m too impatient to wait for a reorder. Those times, I use comiXology. It’s a fantastic platform and by far the most convenient. I read my digital comics on my iPad, and comiXology’s integration with iTunes and iOS is really seamless. Their trademarked “Guided View” changed up the comics reading experience a bit too much for me, but you don’t have to use it. And when you’re home sick in bed, flipping through comics on your iPad is a good way to pass the time.

I have a lot of Amazon angst. I’m pretty sure they’re going to keep absorbing content distributors and retailers in a Blob-like fashion until they’ve taken over the entire world. I try to get my books and comics from local indie shops; I use a Kobo instead of a Kindle; and I stopped using Goodreads when they were sucked up by Amazon. I do not like giving Amazon my money, and I avoid it whenever I can. I’m not saying I’ll never buy a comic from comiXology again, but I’ll think long and hard before I push the “buy” button.

And that is really exciting! As a comics evangelist, I’m always pleased when people discover comics. Because comics are really wonderful, and a broader more diverse audience will hopefully bring new kinds of stories to the medium. Only good things can come from more people picking up comics.

I also think it’ll raise some really good, and long overdue, conversations about distribution. All print issues are distributed to comic shops by one company: Diamond Comic Distributors. Retailers have to order books three months in advance, and they can’t return the stock. It’s a process that has always felt counterintuitive to me. There’s got to be a better way to get comics into shops and in the hands of readers. Competing with a juggernaut like Amazon will be yet another wake up call to Diamond and comics publishers.

There’s also the issue of data. As of now, Diamond publicly releases sales numbers but comiXology does not (aside from stuff like the best selling issue in a particular week). Presumably, Amazon will now have access to all that data. I can’t speak to what numbers comiXology releases to comics publishers, but there’s been scuttlebutt that Amazon will know more about a comic’s readership than the publisher of that comic. Which is a pretty scary thought. Anyway.

The tl;dr, gentle readers, is that this could really be a game changer for comics. And that’s both terrifying and exciting, as all big changes are. Hopefully, things will change for the better, and everyone will discover a comic they love. I really wish Amazon wasn’t the reason behind it.