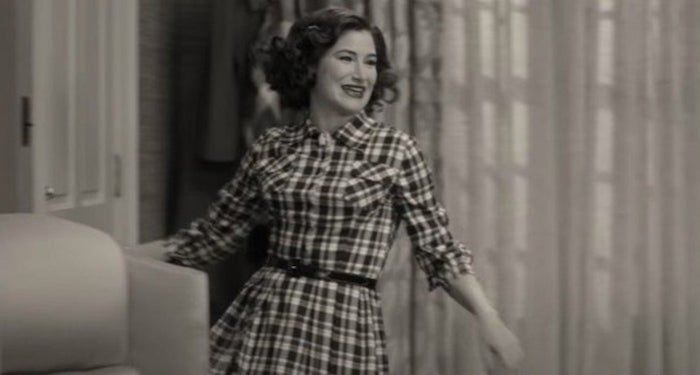 You are probably reading this because you are either obsessed with Marvel’s WandaVision or you just started watching and you have no idea what is going on. If you use social media, you have most likely seen a lot of TikTok videos of people dancing to a catching tune that sounds similar to the theme song from the old cult classic The Munsters.

Now, without giving major spoilers for those who have not watched yet, I am going to explain who, or better yet what she is without revealing too much of the show itself. In WandaVision, we understand that Wanda herself is in a conflicting bind that separates herself from reality. However, through it all, Wanda has found solace in her neighbor Agnes, also known as Agatha Harkness.

In the comics, Agatha is not always portrayed as a villain. In fact, there are several references where Wanda calls Agatha, “Aunt Agatha.” Agatha Harkness is an old witch who is said to be centuries years old. Exactly how old, though? Well, according to the Marvel Encyclopedia, she lived at least a few hundred years before Atlantis sank in the ocean about 20,000 years ago.

So how powerful is she?

The short answer is that she is almost unstoppable. She has even resurrected herself from death before. After Harkness had contributed to several witches being caught and killed by which hunters, she married and had a son named Nicholas Scratch (who she eventually disowned). Her son, like her, possessed magic.

Again, Harkness isn’t always a villain. There were times she used her power and magic to train others to help them defeat evil.

So what does a witch do with all of her time and mystical abilities? She babysits the kids of the world’s most powerful superheroes, of course! She watched Reed Richard’s son Franklin, and that’s how the Fantastic Four came into contact with what is known as the Frightful Four — an evil version of the superhero group that Agatha Harkness had in her house!

Now that you know what sort of shenanigans she does, you have to understand her connection to Wanda Maximoff.

Long story short, the surviving witches from the community Agatha Harkness was sending witch hunters to wanted her dead body — and they got it, kind of. They put her body on a burning stake and killed her. However, while Agatha was burning, Wanda was fighting some of those witches and things got out of control fairly fast. Ironically, it was Agatha’s granddaughter Vertigo, who was one of the people responsible for capturing her, who lost control of her magic fighting Wanda. Wanda used that opportunity to gain more power and to have the ability to have her own children!

What’s up with all the purple?

If you are watching the show on Disney+, you may or may not have notice that Agnes, or Agatha Harkness, wears a lot of purple. She doesn’t just wear it because it’s her favorite color but it signifies one of her deadliest weapons— the Wundagore Everbloom.

According to some fan theories, Agatha has been using the plant to keep Wanda under her spell this entire time. In the series, she gives Wanda flowers, sprays “lavender” spray to help the twins sleep, and offers Wanda tea.

Agatha Harkness comes back to life!

She just shows up with no explanation and of course, she finds Wanda again. She trains and teaches Wanda in the ways of magic and of course Wanda is thankful. But then, Agatha wipes Wanda’s memory because she doesn’t want Wands to know that her children were taken by Mephisto.

While Agatha is not your standard or typical villain, she’s not completely trustworthy either.

Now that you know some of Agatha’s comics backstory, what do you think the show will do with her character next? We know to be suspicious even if she’s killed off: she’s come back from the dead before. We should also be wary any time she’s around plants. Whatever happens to her character next, there’s one thing for sure: her theme song will be stuck in our heads for a long time.