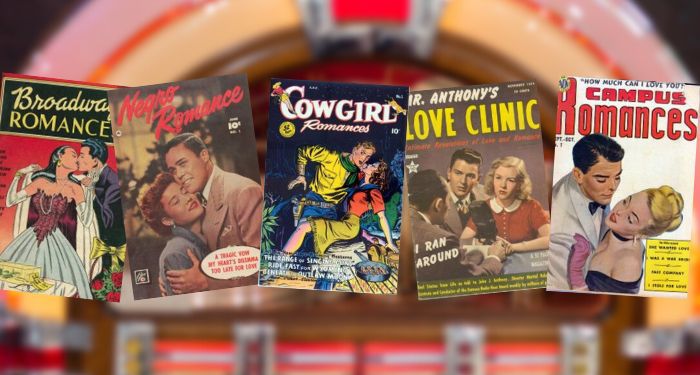 Romance comics were everywhere in the late 1940s and early 1950s. After so many years of war and economic depression, Americans were eager to read about men and women getting all smoochy-faced with each other. Unlike other comics that followed the adventures of a particular character, romance really was the focus here: each issue featured one-shot stories about a couple going through a crisis before reuniting for an implied happily ever after. Fade to black.

As the genre’s popularity exploded, so did the diversity (for a given definition of the word) of romance titles. Sure, you had a whole lot of generic, samey-sounding titles — Love Confessions, Confessions of Love, Romantic Confessions, All Love, All Romance, Glamorous Romances, Young Love, Young Romance, etc. — as well as the occasional title that sounds promising but actually isn’t (Women in Love is NOT what you’re thinking).

But then there are those that found their own little niche and just sat there. They chose a specific theme or setting and exploited it for all it’s worth. Sometimes, this results in some interesting and creative stories, and other times, it…doesn’t. I read the first issue of each of these five romance comics to give you (and me!) a general idea of what they had to offer. If any of these comics tickle your fancy, they are all in the public domain and available on Comic Book Plus.

Content warning for discussion of old-timey misogyny and assault

The title sounds like a bad joke, but the story behind it is sort of interesting: John J. Anthony was a popular radio show host who spent well over a decade dispensing marriage advice on the air. (This despite his own first marriage ending in divorce and a stint in “Alimony Jail.”)

The comic, like many other romance comics, purports to feature the real romantic problems of real people. I assume/hope this is not true, as one of the featured women killed a small child while speeding and only felt remorse after she got out of jail and her neighbors called her rude names about it.

All of the stories follow the same premise: once we are thoroughly introduced to the girl, her boyfriend, and their problem, she inevitably turns to Mr. Anthony for advice. Anthony then invites the couple onto his radio show and solves their problem with a few panels of sage advice, for which they are eternally grateful.

For what it’s worth, the comic includes a Dear Abby-type section where “Mr. Anthony” — or someone posing as him — answers reader letters, and the advice is generally pretty sound. (No, you shouldn’t marry a man with a drinking problem in the hopes that marriage will make him better.)

A college seems a natural setting for a romance comic: it’s full of pretty young people who are away from home for the first time and ready to exercise that independence through partying and hook ups.

Unfortunately, this was 1949, and people in comics weren’t allowed to have that kind of fun. Half the stories in Campus Romances #1 aren’t romances so much as morality tales warning girls to stick to their books and avoid chasing men, or else. The girls even break the fourth wall to hammer the point home.

That word is now outdated at best, but in the early ’50s when this comic was published, it was the preferred term for (and by) Black Americans. In any case, it’s telling that the industry considered comics with Black people to be their own special subcategory rather than allowing — “integrating,” one might say — Black characters into their other series.

(Mr. Anthony’s Love Clinic features a story about a Southern belle who “fancied myself a sort of blonde Scarlett O’Hara.” So.)

The characters may be Black, but the prose is purple as hell. (“Now it was too late, for the rushing waters of my ego had carried away the things in my life which had been fine and beautiful…”) Still, given that this came a mere four years after Disney’s infamous Song of the South, it’s refreshing to see Black people depicted as people and getting to have the same types of normal adventures as white people.

There were quite a few Hollywood-centric comics, but Broadway doesn’t seem to be as common. Going by this comic, I’d say it’s probably because they had only one plot to go with it: small-town girl becomes big glamorous star, falls in love with a guy, and then either a) abandons fame and fortune and discovers who her real friends are (it’s always that one guy), or b) tries to abandon fame and fortune to soothe the guy’s fragile ego.

(Okay, in the next panel, he admits he was a jerk and insists she stay in the show. But this came dangerously close to being Annie Get Your Gun.)

The only really unique tale is “Thief of Hearts,” about a ticket-seller who falls in love with the cop who… stood by while a known criminal assaulted her and then tried to kiss her because, hey, that crook got away with it, so maybe she’ll like it when the cop does it? Can we go back to the boilerplate stories, please?

This comic stretches the definition of “romance.” Each story has a romance, but the extent to which they focus on that relationship varies. Some are simple Western tales starring a woman who just happens to be pursuing a guy in between trying to catch gamblers or setting people’s houses on fire for specious reasons. The comic also has the disturbing habit of describing committed relationships as “putting [one’s] brand on” someone. Ew, no thanks.

One of the characters ends up with a guy named Don Diego Vega y Alvarez, so I guess this comic takes place in the same universe as Zorro.

Despite the diversity of settings and framing devices, the plots of these ’50s romance comics mostly follow the same general outline: woman Does Her Man Wrong, repents, and gets man back. Cowgirl Romances at least tries to spice it up a bit with shootouts and such. There was even one story in which the main character, a woman, bends the law to help a couple get married but has no romance of her own.

I’d be more annoyed about how the women are always depicted as the ones in the wrong (except once in Campus Romances), but I assume that the creators of these comics assumed their target audience was young girls. Of course young, female readers would want to focus on the women’s actions and perspective rather than watch some guy try to get himself together. And of course, that means the women have to mess up and then try to fix what they did, with or without the expectation that their boyfriend will forgive them.

Still, it would be nice if at least one story had the woman deciding her partner wasn’t worth the trouble and finding someone who didn’t forcibly kiss her, flaunt his affair in front of her face, or gamble away all her savings.

So there you have it: some very specific ’50s romance comics. If you want some better genre-specific romantic tales, check out these culinary romances, or maybe these ghost romances!