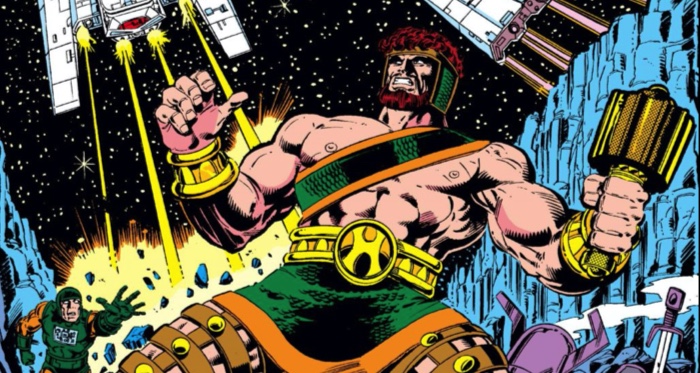 The other day as I was cruising Twitter and came upon another hilarious offering from Her Majesty Gail Simone, it struck me that B-list comics villains, especially those with roots in the DC mythos, have enjoyed a renaissance since the advent of The CW’s Arrowverse. Their presence has been particularly notable on The Flash, where not only have we been treated to a revival of Mark Hamill’s Trickster and the cerebrally enhanced Gorilla Grodd, but a storyline that made King Shark, of all characters, relevant again.

Never a company to be left behind, Marvel has included some lesser known names in their screen projects (The Runaways, Cloak and Dagger) though they’ve tended, primarily, to garner attention for their second tier characters by giving them face time in the print universe either by including said folx in large crossover events such as Civil War II and Secret Wars or adding them to big name teams like the Avengers, alongside such luminaries as Captain America and Thor.

One of the fortunate chosen: Hercules.

Nope. Not this guy.

Though it’s an easy mistaken these days, considering they’re both owned by this guy:

Allow me to clarify.

Self-Chosen Full Name: Hercules Panhellenios (to distance self from Hera because dang, did she hate him) 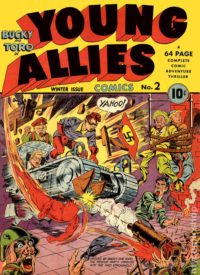 Creators: Stan Lee and Jack Kirby (you can tell by the hat)

Comic Hercules’s origin is, in essence, that of the mythological hero: his father, Zeus, seduced his mother, Alcamena; Hera was, rightfully, extremely displeased. Alcamena tried to appease the goddess by naming her son after Hera (Herakles = “Glory of Hera”). Which apparently worked, albeit briefly, because when Hera and Athena found Hercules abandoned outside the city, they brought him up to Olympus. Hera rescinded the kid’s invitation when, during feeding time, he chomped on her boob with his divine strength. Bio mom and human dad took him back, but Hera decided the mortal life wasn’t punishment enough and sent two snakes to kill Hercules. He killed them instead.

Trained as a warrior, Hercules proved his prowess by murdering his music teacher when the other man criticized his lack of skill, then went wandering, started some wars, Golden Fleece, Twelve Labors, Troy, was a terrible husband to three different wives and an awful father to several children, died, and was posthumously elevated to Olympus. 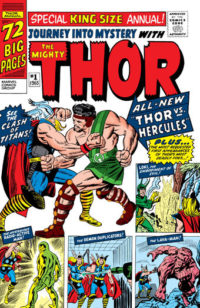 Hercules entered the Marvel universe in a Young Allies #16, time-travel B-story and didn’t return until 1965’s Journey into Mystery Annual #1 when he and Thor got into an extremely dudely argument about whether or not Thor is going to wait to cross a bridge, as Hercules demanded, or just go because there’s plenty of room for the two to pass one another. Never one to be out-arroganted, Thor ignored Hercules’s dictate, which prompted Hercules to take a swing. Thor hucked Mjolnir at Hercules and was more than a little shocked when the Olympian grabbed the hammer out of the air and threw it back at the Asgardian. Pretty much equally matched, they wailed on each other until Zeus broke it up, at which point Thor was like, “Yo, I doth not mean to offend, I was looking for a way here when I was attacked by some frost giants and did defeat them but then felleth in a hole and thus arrived through some sort of weird side entrance,” and Hercules was all, “You hath my apologies, bro,” Loki shook his head in disgust and they all sang songs around the campfire until Zeus sent Thor and Loki back to Asgard.

Hercules’s on again-off again relationship with Olympus and Olympus’s “it’s complicated” relationship with Asgard has provided ample fodder for Hercules storylines over the years. In one arc, Enchantress, wanting to get revenge on the Avengers, ensorcelled him and sent him after the team, though Clint was able to break the binding; Zeus, who apparently doesn’t believe in extenuating circumstances, exiled Hercules for his unauthorized excursion, so Herc hung with the Avengers, first in an unofficial, and then official, capacity until the Olympians were attacked and cried to their prodigal son for help.

Later, Ares decided he wanted to start some shit with the Asgardians and possibly the heroes of Earth, so he turned the Olympian gods to crystal (how this was supposed to provoke the Asgardians I’m not entirely sure); being a mere demi-god, Hercules didn’t turn, so Ares went old fashioned, beat him up, and dropped him on Earth without his memory. Clint found him (again), jogged his memory, and good triumphed because evil forgot to lock the door (literally).

Since then, Hercules has been: the leader of the short-lived Champions of Los Angeles, an Avenger, the prisoner of a Celestial, a member of Heroes for Hire, an ally of Amadeus Cho, and an omnipotent god who burned out his powers to become a mere mortal once again. He has saved Brooklyn from Hecate and prevented Ares’s resurrection by the witch. He took over a bar with A. Nancy, was bitten by a bed bug who gave him spider powers, made out with Arachnae mid-battle with he X-Men, and was eventually cured of his mutation (good? bad? I guess it depends how much he liked Arachnae). He has also taught traditional naked Greek wrestling at Avengers Academy. 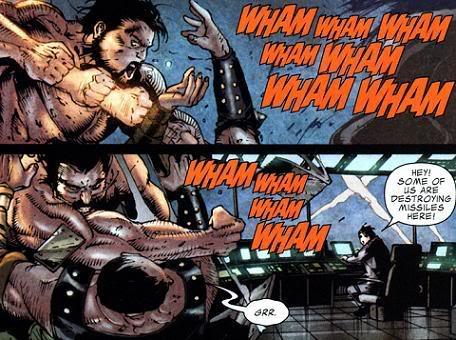 All New, All Different

Shunned by the hero community (for? He…hasn’t done anything worse than anyone else), Hercules attempted to regain his status by forming another team: Gods of War. Though successful in their first mission, after Civil War II, Hercules rejoined the Avengers. The post-Secret Wars Era hasn’t been particularly kind to the demi-god. He was last seen with the Guardians of the Galaxy.

As though the OG mythology weren’t wild enough, this demi-god also got to take a ride on the comic book train, which…If anything can out-weird Greek mythology, it’s Olympus and Asgard throwing sentient hammers at each other because, despite a bridge being more than wide enough to accommodate two giant dudes, it will never be wide enough to accommodate their egos. As for the mysterious bond between Hercules and Clint? That’s a job for the fan fiction mobile.