There is still a heavy stigma surrounding discussion of mental health issues, even in fiction. While discussion is, perhaps, a bit more open than it has been in the past, pop culture portrayals are still most commonly the facts altered and exploited to make interesting pages and hour-long episodes, rather than honest explorations of mental illness: the way it alters lives and affects every day of a person’s life going forward, and the lives of those around them. Rather than examining mental illness as exactly that, an illness like diabetes or pancreatitis, an imbalance of neurotransmitters that affects the brain and, in turn the body. Something that, as renal failure can be controlled but not cured by dialysis, mental illness can be managed by medication and other treatments but can’t be completely relieved or fixed. That it isn’t asked for but must be accepted. That it requires exhaustive maintenance every day that takes a massive toll outsiders may never be aware of. 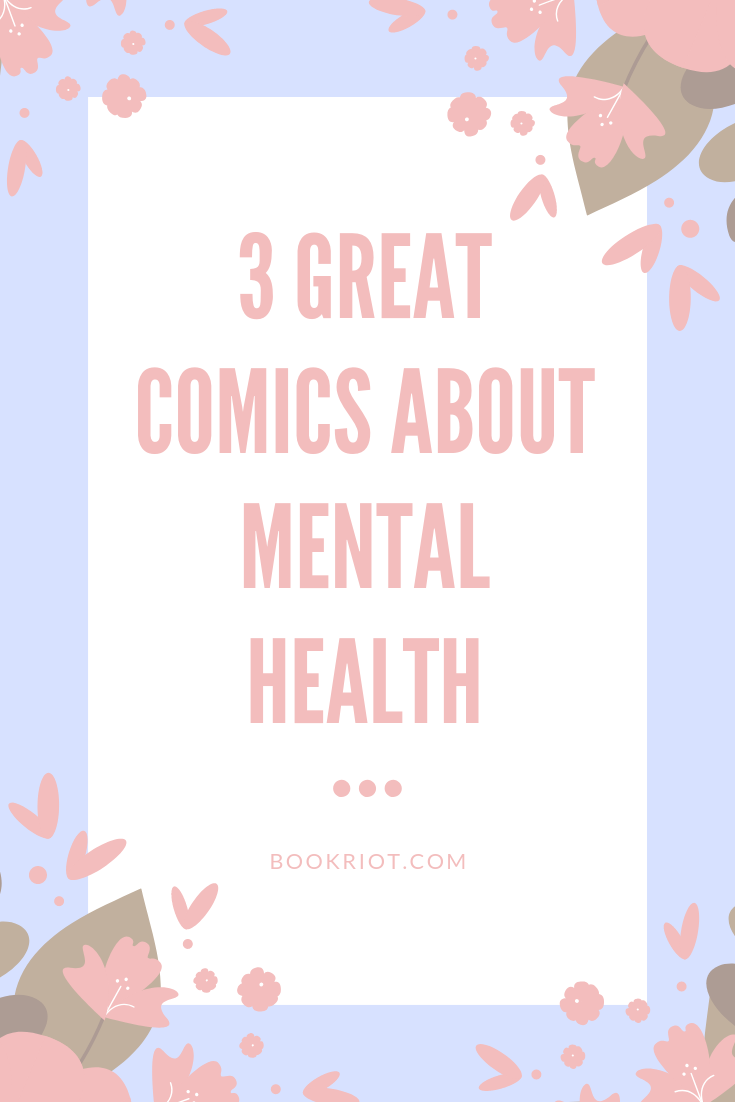 I have a vested interest in this discussion and in seeing accurate portrayals of mental illness in fiction. I was officially diagnosed with depression and generalized anxiety disorder when I was 20, but looking back, the symptoms probably manifested when I was in my early teens. I haven’t slept through the night, even the the help of medication, more than a handful of times since I was 11 (I’m almost 41). When I was 34, I was officially diagnosed with OCD, though, again, that was just the “labeled with the code for insurance purposes” date. I’ve discussed the possibility of being bipolar with a couple of different doctors who have all concluded that since my medications control my symptoms, a label isn’t necessary but, yeah, it’s pretty likely. These things tend to run in families, which is as far as I’m going to go with that because those aren’t my stories to tell but…yeah. So, I feel every badly written mental heath arc personally. They upset me. They make me angry. It’s only recently that I’ve stopped myself from being ashamed that other people may see me the way they see those characters, and realized that’s a failing of the writers and the readers and not my own. I’ve also realized, however, that it’s my responsibility to stand up and make noise for the books that do it well, to make sure those are the books people are reading and asking questions about. To help answer those questions if I can, to provide the proper resources if I can’t.

In honor of #projectsemicolonday (April 16th) and Mental Health Awareness Month (May), let me give you a few recommendations: 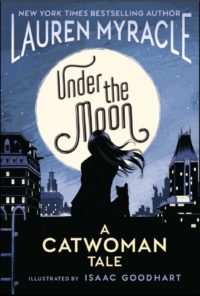 If you need proof that graphic novels aren’t all capes and tights, this book will provide it. Under the Moon is not an easy read and I’d suggest parents take a look at it before handing it to their teenagers, or read it with them. It’s not that I advocate censoring books for younger readers or avoiding any of the subjects herein (see above). Myracle deals with domestic violence, self-harm, depression, and suicide very frankly in this story of a young Selina Kyle, and I am all for that, but I think adults should be aware of what their children are delving into so they’re prepared for questions kids might have or conversations parents might not otherwise be prepared to have. Under the Moon may help teens give voice to feelings or thoughts they’ve been keeping hidden—thoughts that will require a calm, steady, loving adult to navigate. It may help kids recognize dangerous behaviors or signs of domestic violence in their friends, and parents may find themselves the trusted adult in such scenarios; you need to be prepared to believe them, no matter how well you may think you know that other adult. Selina never finds that mentor in Under the Moon, but she does find trusted companions, people who will have her back no matter what happens. People who will be there for her no matter how long it’s been or what’s happened since the last time she saw them—everyone should have that, and knowing it’s there can make all the difference. Dear parents: that may be you. 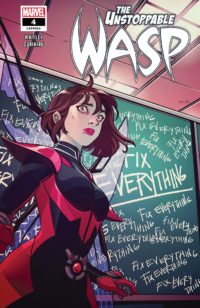 Full disclosure: I was a sensitivity reader on issue #4 of Unstoppable Wasp, so I have a vested interest in people getting their eyes on this book. I was a sensitivity reader on this book because I have a vested interest in people getting their eyes on this book. Why? In issue #4, Nadia Van Dyne has her first manic episode on the heels of her first major failure. Turns out, it runs in the family: Janet reveals that Hank Pym was bipolar and while she (wisely) doesn’t allow the fact to explain away his abusive behaviors, she does use it to appeal to the scientist in Nadia, the part of her adopted daughter who understand genetics and biochemistry, the part that understands that, while the imbalance isn’t her fault, seeking help to control it to the degree possible is her responsibility. The manic episode in the most realistic I’ve seen portrayed in comics, starting with a baseline logical goal and exploding to an obsession, based in positive intent and becoming all-encompassing, even harmful to the point of violence, with Nadia able to see the truth only with the assistance of others. Some of her support structure remains and some drops away. There are amends to be made that may or may not be accepted. Nadia sees bipolar disorder as a problem to be solved and needs someone to explain to her that it is, in fact, a paradigm shift that will require life-long work and intervention. I cried. A lot. Because it was everything I wish someone had explained to me when I was that age. Because Nadia had the support I wish I had had. Because I know what’s coming for her and there will be horrible moments but, also a really decent chance she’ll make it. I want her to make it. 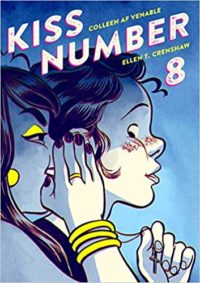 Mads thinks she’s happy with her life. Alas, as so often the case in our teens, her view of what life can be expands and she realized that, perhaps, she isn’t as happy as she thought she was. Confused about her feelings for her best friend Cat and Adam, the boy next door, and which one of them she actually wants to kiss. At a loss as to why Lisa, her friend of many years, is acting so weird, Mads’s entire support structure drops away. She tries to go to her father, who has always been her best friend and finds, suddenly, she can’t talk to him about everything and god forbid she should go to her mother. When a mysterious check arrives in her account, Mads starts digging into her family history and finds there are things her father has kept hidden since before Mads was born. Things that, if he persists in ignoring, persists in denying, mean Mads can never be her authentic self around the most important person in her life.

Being forced to be someone you’re not, or denying who you are, is a dangerous road, and it’s extremely detrimental to mental health, as is evidence by high rates of suicide among LGBTQIA+ youth. According to The Trevor Project, a nonprofit providing crisis intervention and support to LGBTQIA+ youth, LBGTQIA+ youth contemplate suicide 3x as often as heterosexual youth, attempt suicide 5x as often, and are almost 5x as likely to require medical attention when they do attempt self-harm. 40% of transgender adults report having attempted suicide and 92% report having done so before the age of 25.

Those numbers are staggering. Kiss Number 8 will show you why they exist. If you’re LGBTQIA+, it will give you hope. It can get better. If you’re a parent or friend or family member, it will show you how important your support is.

If you need help, please access one of these resources. If you are concerned about your computer being monitored, use the text function:

or go to your nearest emergency room.