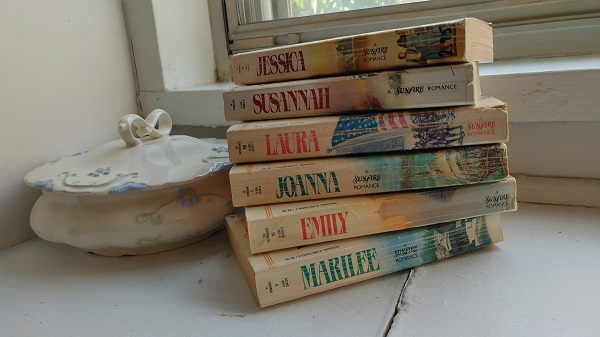 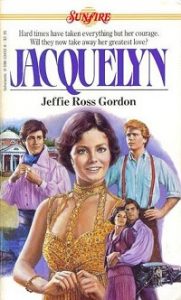 There was a formula, and I loved it. The spoiled but plucky girl was a staple of the Sunfire romance. Another of my favorites was Jacquelyn by Jeffie Ross Gordon, in which a spoiled but plucky girl whose family lost its fortune in the 1929 crash learned to survive and found love during the Great Depression. Often, these are girls who are born to wealth and face little difficulty in life until some disaster brings financial ruin and forces them to get out in the world and develop skills they never knew they’d need.

My favorite of the spoiled but plucky girls, however, was a departure from the norm. Emily by Candice F. Ransom features a leading character who doesn’t seem plucky at all to start. Born to a Gilded Age New York family, she’s in the throes of an existential crisis that looks a lot like depression. Wealth itself seems to be her problem, as she feels useless and finds no joy in travel and clothes and her coming debut. It’s only when her little brother gets sick and she discovers nursing that she starts to find purpose, and then her pluckiness kicks in as she tries to get her family and the medical establishment to accept her as a nurse in training. I recently reread this book, and it holds up better than I thought it might.

Another Sunfire staple is the love triangle. Almost all of the books feature one, even if the triangle sides aren’t at all even. Often, the love triangle really represents the heroine’s choice between the old way of living and a new, more liberated existence. And usually, the two men in the triangle appear on either side of the heroine on the book’s cover. Amanda, for instance, is torn between her fiancé back in Boston and a man she meets on the trail. Jacquelyn, likewise, has a love interest from her past, but Gordon changes things up by adding another love interest in the form of a boy in Jacquelyn’s new, poorer neighborhood, as well as a dancer she meets while in pursuit of a job. 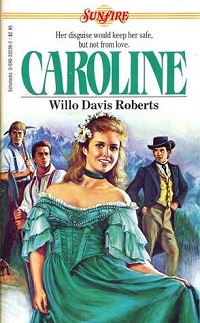 But one of my favorite books dispenses with the love triangle altogether, creating a different locus of suspense. Caroline by Willo Davis Roberts features a heroine who is not especially rich when the book begins and who has no particular romantic prospects (as far as I can recall, anyway). But when her brothers (on her right on the book’s cover) leave for California to look for gold, she’s bereft at being left behind, so she disguises herself as a boy and follows them. Of course, to follow them, she has to join someone else’s wagon on the trail west, and of course, the likeliest prospect to need a boy to help out is a handsome bachelor. You can see where this is going. So instead of who will she choose, we’re left with when will he learn the truth, and what will he do?

Early Sunfire Romances were a little longer than typical Young Adult novels of the time, usually in the neighborhood of 350 pages. The later, thinner books hardly seemed worth the trouble to me. I only read one or two of those. I think that’s because what I loved about these books was the abundance of historical detail. The descriptions of garments, food, entertainment options, chores, and so on totally swept me up. The romances were fun, but the bits of these books that stick in my memory are snatches of songs, meals, and daily tasks. However, as an adult, I do wonder about accuracy. In the main, I think the details were fine, and the books certainly work as nice glimpses of the period, but rereading Marilee by Mary Francis Shura left me with questions about the sizes of the houses in Jamestown fort and indeed the size of the fort itself. It all seems a little too big. And I also have questions about why a building that looks like Monticello is on the cover of Jacquelyn, set entirely in Chicago. 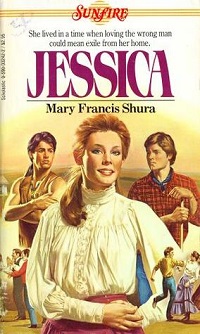 All of the books focus on American history, and almost all of the heroines are white. Corey by Jane Claypool Miller features a heroine who is an escaped slave, but it’s one of the shorter books, and I never actually read it. One book that I did read, Jessica by Mary Francis Shura, included a Native American love interest. I recently reacquired a copy of this one, but I’m nervous about rereading it!

As I look back on my own history with Sunfires, I’m struck by how much the brand mattered to me, rather than the authors. When choosing which ones to read, I looked for the thicker books and then chose according to which historical eras and plots appealed to me most. My library didn’t carry these books, so I was stuck with what I could buy at the bookstore or through Scholastic book orders, and although my parents were permissive about my book buying, I knew better than to ask for all the books, so I would get one or two at a time, and look for them in used bookstores.

No one else I knew read these books, so they felt like my special secret, and without the internet, I had no sense of how many there were. There are small numbers on the book’s spines, but I don’t think I paid attention to that. Looking at the full series list, I think I read about about ten of the 32 books in the series. I think only 15 were at my preferred 300+ page count, so that makes sense.

It’s also interesting that, although I loved these books, I never made the transition to adult romance. Part of that may be because I didn’t have fellow fans around me to help me make that jump. And since it was the history that I loved most, I ended up jumping to historical fiction and classic fiction set in the past. There was, in fact, a time in high school when my reading consisted mostly of rereading favorite Sunfires and reading Dickens, Hawthorne, and Hardy.

However, I am curious now to know which romance authors former Sunfire lovers gravitated to. I have read and enjoyed Georgette Heyer, but who today is writing the adult version of the Sunfire romance? Share you suggestions, and your own Sunfire memories, in the comments!

Sign up for Kissing Books to receive news, book recommendations, and more for residents of Romancelandia.
Thank you for signing up! Keep an eye on your inbox.
By signing up you agree to our Terms of Service
#Our Reading Lives#Romance/Erotica#Young Adult Literature#Sunfire