Hey there, folks! Did you dig Spider-Man: Homecoming? So did I, but as usual, I found myself thinking how much more I’d like Peter Parker if he was a girl. (Zendaya as Spider-Woman! Imagine it!)

Well, luckily for me, there are about a billion female variations on the Spider franchise. Since they only share a handful of codenames between them and come from multiple universes and timelines, things can get a bit confusing. Let’s break it down: 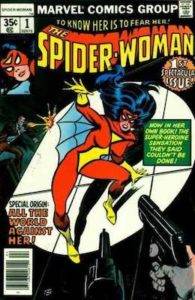 That costume, thank Arachne the spider goddess, is no more.

Spider-Woman has just about my favorite impetus behind her creation, which is that Stan Lee wanted to make sure to copyright the name before DC beat him to the punch. And so in 1977 the world met Jessica Drew, who was raised by her scientist parents on the remote Mount Wundagore, and does whatever a spider can’t, i.e. fly and shoot lasers from her hands. Initially her powers were the result of being injected with irradiated spider blood (sure), then by her mother being hit with a spider-infused laser while pregnant (makes sense). Either way, she was orphaned and recruited by HYDRA, who trained her to attack SHIELD under the codename Arachne while keeping their true agenda hidden. Eventually she learned the truth, and struck out on her own as a superhero.

Jessica’s original series ran for 50 issues (can you imagine a comic book industry where a character no one really cares about gets a 50 issue series?). She was killed off at the end, and though she was promptly resurrected, she’d already been supplanted by a new Spider-Woman, Julia Carpenter. She bopped around the MU as a minor character for a couple of decades, mainly sticking to her role as a P.I., but wound up back in spandex as a member of the Avengers in 2005. Though this version turned out to be a Skrull imposter, the high-profile gig meant that when the real Jessica returned in 2009, she was a much more prominent character.

After all the chaos of Skrull abductions, life as a double agent, and Spider-Verse (see below), Jessica donned a cool new costume and quit the Avengers, concentrating instead on her P.I. work. She recently had a baby named Gerry. He’s precious. 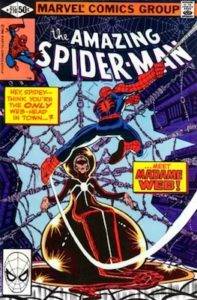 I don’t know why she’s in a baby sack, but I’m not clairvoyant.

Madame Web isn’t exactly a Spider-Woman, but she is both a woman and a spider, not to mention closely tied to much of the Spider-family. A clairvoyant and precognitive mutant, Cassandra Webb lost both her eyesight and much of her mobility to a condition called myasthenia gravis, so her wealthy husband built her a life support system—and designed it to look like a spider, because you don’t waste a last name like that.

Madame Web used her powers to advise Spider-Man for several decades, as well as various Spider-Women, particularly Mattie Franklin. However, in 2010, both Madame Web and Mattie were killed by Sasha Kravinoff. Before dying, Madame Web somehow passed on her precognitive powers—as well as her blindness—to a successor… 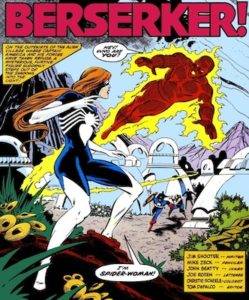 Adorable fun fact: Peter subconsciously based his symbiote costume on Julia’s because he thought she was so cool.

Here’s a tip: if you live in a superhero universe, don’t ever volunteer for an “athletic study” run by a super-sketchy organization. In Julia’s case, the organization was the Commission, and she came out of it with your basic serving of spider powers (actual spider powers, Jessica) after being injected with various spider venoms and plant toxins. She bounced around various superhero teams for a while (Freedom Force, West Coast Avengers, Secret Defenders) while fighting her own rogues, the spider-themed team Death Web (also created by the Commission). Eventually, after losing her powers to Charlotte Witter (see below), she decided to retire and concentrate on raising her daughter, Rachel.

A few years later, Julie returned to superheroics under the codename Arachne (which had previously been used both by Jessica and by a member of Death Web) (also by a Greek spider goddess) (and a demon) (it’s a popular name). After operating as a double agent in Civil War and having an ill-fated romance with the Shroud, Julia was on the scene when Madame Web was killed by Sasha Kravinoff and, as mentioned above, inherited Madame Web’s powers. Now she operates more as an observer of Spider-events and advisor to Peter, and less with the kicking and punching—though she can definitely still do both when called upon. 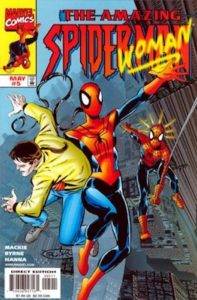 A die-hard Spider-Man fan, Mattie took her father’s place during an arcane ritual meant to endow Norman Osborn with super strength, speed, agility, etc., and received the powers herself. With Jessica retired and Julia using the name Arachne, Mattie took the Spider-Woman title and starred in her own short-lived series, under the mentorship of both Jessica and Madame Web. During a battle with Charlotte Witter (see below), she was briefly de-powered, but then absorbed the powers of Charlotte, Jessica, Julia, and Madame Web, as well as her own original ones. However, everyone but Charlotte’s powers eventually returned to their owners.

Neglected by her single father, Mattie wound up being taken in by her Aunt Marla—and Marla’s husband, J. Jonah Jameson. After a couple years out of the limelight, she was roofied and abducted by a small-time drug dealer who used her both for prostitution and to manufacture Mutant Growth Hormone, a drug made from the genes of superpowered humans. She was rescued by Jessica Drew and Jessica Jones, started counseling, and focused her superhero efforts on taking down other MGH traffickers. However, she was killed shortly thereafter by Sasha Kravinoff. 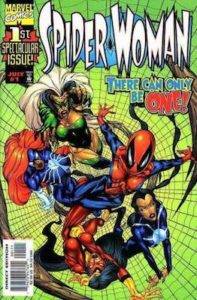 The Spider-ladies have a lot of double agents among them, but Charlotte’s the only true villain. The granddaughter of the original Madame Web, she took a job with Doctor Octopus, who turned her into a spider-human mutant because that’s the sort of thing he does. She attempted to steal the combined powers of the other Spider-Women, but lost them to Mattie. She’s been in a coma ever since. Them’s the breaks, Char. 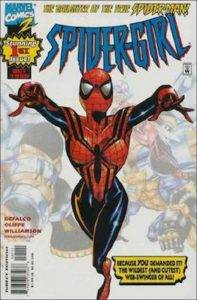 Sadly this is one of the *least* T&A-y covers of this poor kid.

Up to now, we’ve only talked about Spider-Women…but oh, there are Spider-Girls too. First up is Mayday Parker, daughter of Peter and Mary Jane from an alternate future (usually designated as the MC2 universe). Popular, athletic Mayday inherited her retired father’s great powers—and his sense of great responsibility—and became a superhero over her parents’ protests. Her adventures stayed mostly contained to her unexpectedly long-running series and its spinoffs until the 2014 “Spider-Verse” storyline, in which the Inheritors killed Mayday’s father in their quest to kill the Spiders of every universe. Mayday subsequently took up his costume and the name Spider-Woman, and occasionally joins up with a dimension-hopping team of Spider-heroes to protect dimensions that don’t have their own Spider. 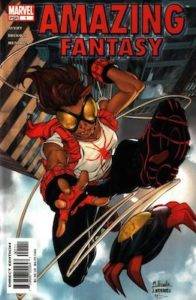 I love teen heroines in terrible costumes made of random things from their wardrobes SO MUCH.

When innocent bystander Anya was mortally wounded in a battle between the Spider Society and the Sisterhood of the Wasp (sure), one of the Spider-monks cured her by giving her a magical spider tattoo (checks out). Endowed with strength, wall-crawling, and a spider-like exoskeleton when needed, Anya dubbed herself Araña and began fighting crime—and continued to fight it even after losing her powers after breaking away from the Spider Society. She inherited Julia Carpenter’s Arachne costume after Julia became the new Madame Web, and soon after changed her codename to Spider-Girl, in part because people were already calling her that. Like May, she now occasionally hangs with inter-dimensional Spider-heroes. You know, when she’s bored. 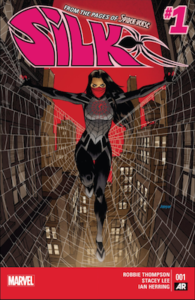 Cindy Moon was the second person to be bitten by the radioactive spider that granted Peter his powers, and developed the same abilities. However, she had more guidance than he did: that of eccentric businessman Ezekiel Sims, who trained her to use them and then hid her in a bunker for seven years to protect her from the Inheritors. She was eventually discovered and freed by Peter, and joined him and the other Spiders in taking down the Inheritors.

With the Inheritors vanquished, Cindy focused on tracking down her long-lost family, who’d gone off the radar while she was in the bunker. She also temporarily joined Black Cat’s gang as an undercover agent for SHIELD, and got a day job working for J. Jonah Jameson at the Fact Channel. 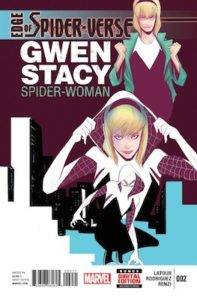 In the main Marvel universe, Gwen Stacy was killed by the Green Goblin in 1973.

On Earth-65, however, Gwen Stacy was bitten by a radioactive spider and became Spider-Woman. Jealous of this new superhero’s powers, and eager to defend himself from bullies, her friend Peter Parker injected himself with chemicals that turned him into the Lizard—and which eventually killed him. J. Jonah Jameson blamed Spider-Woman for Peter’s death and the new hero became an outlaw, trying her best to do good despite being hunted by cops like Frank Castle and her own father, Captain Stacy.

Like the other Spider-folks, Gwen joined in on the multidimensional battle against the Inheritors. She also protects her own home dimension, primarily against evil versions of Matt Murdock and Cindy Moon (the leader of S.I.L.K. and the source of the spider that gave Gwen her powers).

…And that’s all the Spider-Ladies! Interested in reading more? Check out this post by Ardo for good jumping-on points for the three currently active Spider-gals (Jessica, Cindy, and Gwen). Sadly, only Gwen is appearing in a book right now, but hopefully at least Jessica, Cindy, and Anya will return to the spinner racks soon!