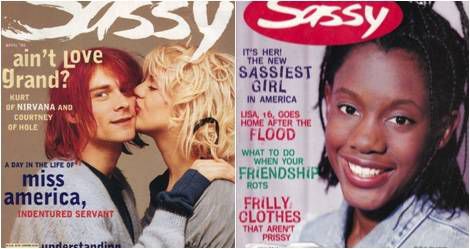 If you’re a woman (or man, but mostly women) over a certain age, you likely remember Sassy magazine. It was sort of like the “anti-Seventeen.” Headed by Jane Pratt (who later created xojane), it was the alternative teen magazine in the late ’80s-mid ’90s. It featured girls of diverse ethnicities and body types in its photo shoots, ran articles about incest, suicide, armpit hair, smashing the patriarchy, bands like Nirvana (before they were a household name), and zines. They had an annual “Sassiest Girl in America” contest, and an annual reader-produced issue. They were sex-positive, body-positive, and whether you were a geek, misfit, jock, differently-abled – anything; you could feel at home with Sassy.

Here’s a round-up of books that reminded me of Sassy mag, or books I imagine a fellow Sassy-reader would love. Obviously, this is far from all-inclusive, and if you have your favorites, I’d love to hear about them. These are in no particular order, and I’ve notated fiction with an asterisk (*), and books that are forthcoming with two asterisks (**).