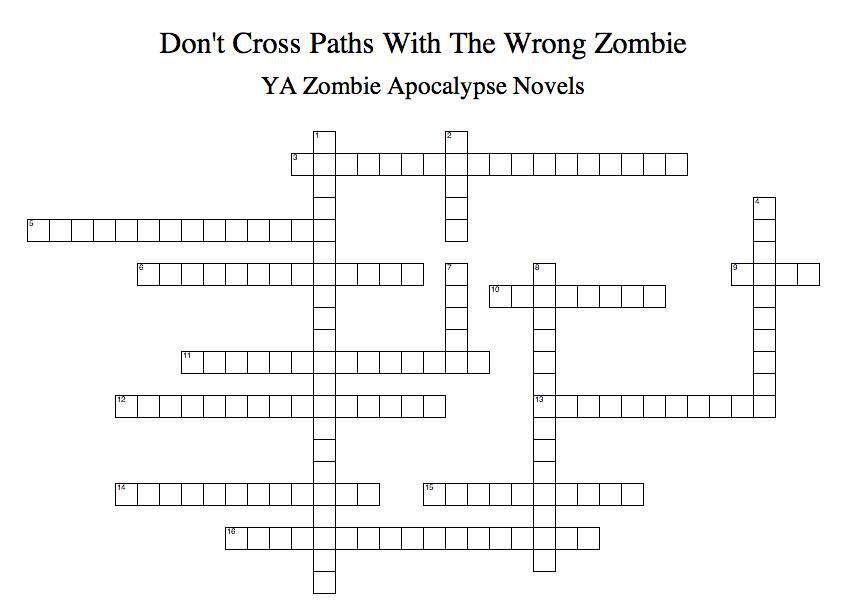 Zombies are far from dead in YA fiction, and they won’t be dying any time soon. They’re perennially terrifying, and because there are so many great stories to be told, it’s likely zombies and YA won’t be parting ways any time soon. But rather than offer up a standard zombie reading list featuring well-known and lesser-know YA zombie titles, I wanted to do something a little bit more challenging.

Enter: a zombie YA lit crossword. Not only do you get to discover a horde of zombie books, you get to have a little fun while doing it.

There are 16 YA zombie books included in this crossword. I’ve developed clues which are short descriptions of the books, and you have to fit the title of the correct book into the correct set of boxes. Because I am only kind of cruel, I’ve included the possible titles, as well. Answers to the puzzle are listed below the clues.

There are no squares in the puzzle dedicated for commas, spaces, nor author names. You can click the image to make the puzzle below bigger and you can print either directly from the post or you can click this link to get a downloadable .pdf file, complete with clues and answers.

3. Megan is a zombie shrink, and yes, it’s exactly what it sounds like. So when the apocalypse happens, guess who has to play zombie whisperer?

5. The steroids that the football coach has been giving his players has turned them from hunky to hungry. Now, it’s science-loving Kate who must deliver the antidote to this zombie horde.

6. Hannah’s the new girl in a town that’s very, very strange. All she wants to do is fit in with the cheerleaders. Too bad they’re undead.

9. Can Brian and his friends survive the zombie outbreak when it arrives at their own high school?

10. The sickness infects everyone over the age of 14. Now those under 14 are seeking a safe place to hide, but everywhere they turn, the infected want to get them.

11.  The last thing Sloane wants to do is survive this apocalypse but now she’s stuck inside the local high school with five other teens. Why won’t anyone let her die?

12. The moment Jake and Amanda lock eyes in the cafeteria, not only do they fall in love, they turn into zombies.

13. What happens when you go from playing games to being in a game itself? And worse, what if that game is the zombie apocalypse?

14. It’s a diet drink that turns ordinary citizens into zombies. But after two years locked up in rehabilitation, now the government is letting them back into society.

16. When her parents die in a tragic car accident, it looks like there’s something coming to eat them. And she’s right. Now she must team up with the hot bad boy to destroy these creatures and save the world.

1. Once the fence surrounding the village has been breached, everything Mary thought she knew about her life and what lived beyond the confines of the village is thrown into question.

2. B grew up in a racist, abusive home, and he’s not very easy to like. Perhaps there is more than one type of zombie to battle here.

4. Nero’s forced to participate in a program for juvenile delinquents to help him straighten up his act. It’s unfortunate the program didn’t mention how counselors would turn into flesh-eating zombies.

7. When an EMP knocks out technology and much of civilization, Alex is hiking in the woods. As she meets other survivors, though, Alex begins to question who is good, who is bad, and who is out for flesh.

8. Sometimes when teenagers die, they don’t stay dead. But when they start coming back to high school, things get complicated — especially when someone living starts falling for someone who is technically dead.

Rot and Ruin by Jonathan Maberry

This is Not A Test by Courtney Summers

You Are So Undead To Me by Stacey Jay

The Enemy by Charles Higson

The Infects by Sean Beaudoin

Now check your answers! How’d you do?