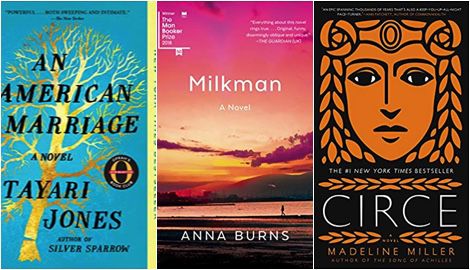 The Women’s Prize for Fiction Shortlist was announced on Sunday, with the six finalists for the 2019 prize.

We're delighted to reveal this year's #WomensPrize shortlist, as chosen by our brilliant 2019 judges 🎉

This is a stellar list of finalists, among them huge Book Riot favorites. Circe by Madeline Miller is on the shortlist, and if selected, will be the second Women’s Fiction Prize for Madeline Miller, who won in 2012 for Song of Achilles.

In another foray into Greek mythology, we have Silence of the Girls by Pat Barker. Barker won the Man Booker Prize in 2005 for The Ghost Road.

Orange Award-winning author Diana Evans’s novel of relationships, Ordinary People, is on the list. Evans was nominated for the Andrew Carnegie Medals for Excellence in Fiction for Ordinary People.

Tayari Jones’s novel An American Marriage appears on the list, after a big year of recognition for her book, including being longlisted for the National Book Award, and winning the NAACP Image Award for Excellence in Fiction.

And rounding out the list is Oyinkan Braithwaite’s My Sister the Serial Killer, which won the 2019 Rooster through the Tournament of Books.

Congratulations to these stellar authors! Winners of the Women’s Prize for Fiction will be announced June 5th. Which one are you rooting for?