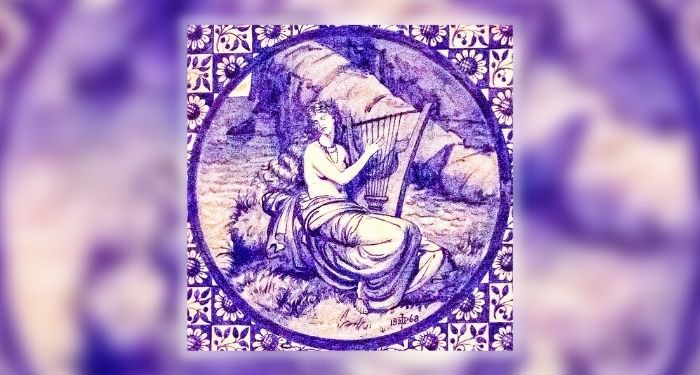 Who was Sappho? Although very little is actually known about the Ancient Greek lyric poet, some of our most common language about queer women is derived directly from her, and we remain generally fascinated with her 26 centuries after she lived and died on the Greek isle of Lesbos. If you’ve ever used the word lesbian — or the word sapphic — or so much as enjoyed a song or poem, Sappho and her far reaching influences have touched you. Read on to learn a tiny bit more about who Sappho was.

Poetry in Ancient Greece was, like most forms of storytelling in the pre-modern world, generally enjoyed in a different manner, one that would likely look unfamiliar today and might indeed be considered more of a performance. Lyric poetry, such as the poems Sappho wrote, was intended to be sung with accompaniment on the lyre. Like the finest hip-hop, writing lyrics (poems) that fit both the rhyme and the meter — or, more accurately, the pattern of syllables — was a skill that likely required a healthy mixture of talent and practice.

If, dear reader, you are now imagining Ancient Greece as something between a poetry slam and a rap battle, you’re welcome and my job here is done. (But do read on for more about Sappho.)

Lesbian: a Latinized version of Lesbios, Greek for from or relating to the island of Lesbos. In English, lesbian became a term for women who love women in the late 19th century, presumably sometime after 1869, when the profession of “sexology,” the pseudo-scientific study of sex which initially referred to homosexuality as “inversion,” was invented (Lesbian Histories and Cultures: An Encyclopedia by Bonnie Zimmerman). However, the French were using sapphisme and lesbienne as early as 1838 and 1867, respectively, to mean the same thing. It is only more recently that lesbian has been used to mean women who exclusively love women.

The island of Lesbos is in the northern Aegean sea, a few miles off the coast of modern day Turkey. The third largest island in the Aegean, Lesbos is about 665 square miles and was also the home of Sappho’s contemporary Alkaios, another poet.

Sappho was born sometime in the 7th century BCE, most likely in the town of Eresos (modern day Skala Eressou) on the southwestern coast of Lesbos. She was renowned in Ancient Greece, most likely beginning during her lifetime and certainly extending to mentions a century and more later by Plato, who called her “the Tenth Muse” and Aristotle, who said, “Everybody honors the wise…the Mytilineans honored Sappho although she was a woman.” (Is it too late to cancel Aristotle?)

Sappho’s poetry was lost during the early Christian period, and for several centuries all we had of her were the words of those men as well as a fictionalized Sappho in Ovid’s Metamorphoses, along with two of her poems and a few fragments that had made their way to Renaissance Europe via other (men’s) work. In 16th and 17th century France and England, efforts were made to preserve and translate those works.

In 1896, Bernard Grenfell and Arthur Hunt, who studied the then-new discipline of archaeology at Oxford, came to the Egyptian city el-Behmesa, once known as Oxyrhynchus, in search of ancient papyrus. The city had been in decay since its colonization by and the subsequent fall of the Roman empire, and the locals hired to help dig had low expectations. But the first document found contained words attributed to Jesus Christ, who is largely considered a big deal. They also found a huge amount of papers documenting daily life, from receipts and tax records to personal letters — so many that they had to store them in biscuit tins for transportation. And they found a poem that unmistakably was written by Sappho. They marveled at their luck, and assumed it was a one-time find, but they went on to find many more fragments.

Sappho’s mother was named Cleis, and in Ancient Greek naming tradition it is likely that Sappho was named after her grandmother; Sappho named her own daughter Cleis. Her father’s name is not known, though there is much scholarly speculation about it. Ovid claimed that he died during her childhood, possibly citing poetry of hers to which he had access but which has since been lost.

Women’s education revolved largely around household management skills, the Greek word for home being oikes and the word for running the home oikonomia, which is the root of the modern word economics. Sappho would have learned many skills including spinning and weaving, but unlike many girls of the time she also became well-versed in literature. Her (male) biographers speculate that she might have sat in on her brothers’ lessons, which is certainly possible. However, Lesbos was notable for its upper-class women enjoying more social freedoms than mainland Greek women, so perhaps she was allowed schooling on her own behalf.

Either way, she became a noted poet as well as a wife.

Lyric poetry was, like the majority of oral traditions, not necessarily written down in its time, but much later. The oldest surviving fragments we have of Sappho’s poetry is on papyrus and potsherd from the 3rd century BCE, a few hundred years after she lived. In the 1st century BCE, the Roman poets discovered and were influenced by her work. For the first three centuries CE, she was featured on the coins used in Lesbos. Also during this time, most of the surviving Oxyrhynchus fragments of her poetry — those found by Grenfell and Hunt — were written down. In the 7th century, her poetry was written on parchment in Egypt. Then some 1,000 years went by before writers and scholars began attempts to find her words (however, it is certainly possible that efforts were made in that time and are merely no longer known).

Natalie Barney was an American writer who, when she was 5 years old, met Oscar Wilde, who encouraged her mother Alice to pursue her interest in art. Barney was a lesbian, and during her time living in Paris as a young woman held literary salons. She once presented herself to renowned dancer and courtesan Liane de Pougy as a page of love sent by Sappho, and later became the subject of Pougy’s roman-a-clef Sapphic Idyll. Barney herself wrote Five Small Grecian Dialogues under the name Tryphé, which contains long passages about Sappho. And Barney dated Renee Vivien (Pauline Tarn), a poet who was one of the earliest modern translators of Sappho’s poetry.

In her diary, Virginia Woolf speculated that critics of her book A Room of One’s Own would call her a Sapphist for its descriptions of female friendship. Woolf’s novel Orlando features a gender-fluid character based on her lover Vita Sackville-West.

Sappho continued to be referenced, directly and indirectly, throughout 20th century literature. In the 1970s, Sidney Abbot and Barbara Love wrote Sappho Was a Right On Woman, in which they discussed connections between feminism and lesbianism. In the latter half of the century and the early 21st century, Sappho’s work was translated into English by writers and scholars including Mary Barnard, who focused on the language rather than the meter in Sappho: A New Translation; Anne Carson, the Canadian poet and professor of Ancient Greek, who I believe introduced the use of brackets to denote lost fragments in If Not, Winter; and most recently Aaron Poochigian, who translated from Greek meter to English rhymed verse, giving readers what may be the closest experience to Ancient Greek lyric poetry in modern English, in Stung With Love.

We still know very little about Sappho, but can learn a great deal from her poetry. From her poems we know she was married and had a daughter, and that she had dark hair that turned white. We also know that she was banished to Sicily for some time around 600 BCE, and though the reason is not known it is likely that it was political. She is believed to have later returned to Lesbos, where she eventually died, most likely not by suicide despite early misreadings of a poem that were later reinforced by Ovid in his fictionalization of her life (which was notably heterosexual).

It is interesting — and by that I mean it is deeply sexist — that we know so much about the lives of men and boys in Ancient Greece but can basically only make guesses ranging from wild to educated when it comes to women and girls (and, while nonbinary people have of course always existed, even if we did have records, we would most likely still have to guess because that language we use to describe gender has evolved and changed so rapidly and so recently — which is a huge step forward but adds to the complexities of accurately describing the past).

One of the books I read while researching Sappho was Searching for Sappho by Philip Freeman. It’s an interesting book that lost me somewhat when the author attempted to piece together what life might have been like for a girl in 7th century Greece in part by studying the poetry of Anyte, who lived 300 years later, also on Lesbos, and whose words survived in less fragmented form. This strikes me as rather like using my now defunct blog (2002–2016) to learn what life was like for a woman during the revolutionary war, but perhaps I am being unfair.

On the other hand, Freeman also claimed that there is no way of knowing whether Sappho, who lived in a time when we are absolutely certain that the vast majority of women and girls made textiles, ever used a loom, because — according to him — none of her poetry mentions weaving.

Sweet mother, I cannot weave –
slender Aphrodite has overcome me
with longing for a girl.

I suppose there’s also no way of knowing if she liked girls.