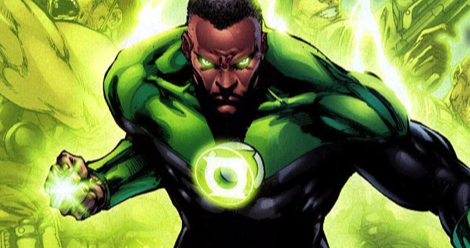 The explanation? The movie was about a completely different Green Lantern than the one featured on the show. See, since 1959, the Green Lanterns have been a whole cadre of space cops from all over the galaxy, frequently numbering in the thousands. Rather than name them all (trust, there are people out there who can do that), I’ll just cover the ones from Earth in this post, with a lightning round of key alien players at the end. Let’s go! 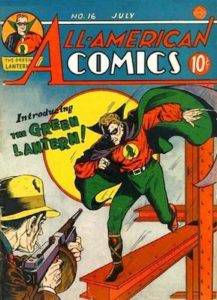 “I know! I’ll call myself Green Lantern, but wear red and purple. Throw ’em off the scent!”

Our first Green Lantern had nothing to do with outer space. Created in 1940, Alan Scott was a railroad engineer who was saved from a train crash by a magic lantern (yes, a green one). He made a ring out of a piece of the lantern that granted him a number of powers, predominantly the ability to make green “constructs” out of hard light energy (i.e. the classic big green glowing fist to punch out a bad guy). He quickly joined the Justice Society, DC’s first superhero team, but faded from the limelight by 1951, and was supplanted eight years later by Hal Jordan (see below).

When the comics caught up with Alan, it turned out he’d had twin kids, now grown and going by the codenames Jade and Obsidian (see further below!). He briefly took on the name Sentinel in the early 2000s to avoid confusion, but returned to the GL title a few years later.

After the linewide New 52 reboot in 2011, Alan ended up on the parallel world of Earth-2 as a young superhero with no kids; he was also either retconned or revealed to be gay, depending on how you look at it. His powers are mystical in origin and he has no connection to the Green Lantern Corps of Earth-1. 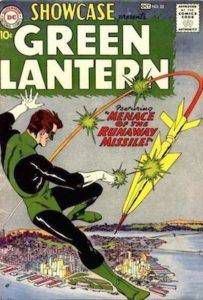 Protip: do not date this man.

During the Silver Age, DC reimagined a whole slew of their existing stable of heroes to be more appealing to Space Age kids. One of the most significant was Green Lantern, in 1959. Now he was Hal Jordan, a dashing test pilot who was given a ring (and accompanying lantern to charge it with) by a dying alien. Hal’s powers were much the same as Alan’s, but came from outer space instead of magic; he also learned that he was part of the Green Lantern Corps, charged with keeping order in the galaxy by the Guardians of Oa.

And, well, if there was a whole corps of Lanterns, there could be more from Earth, including… 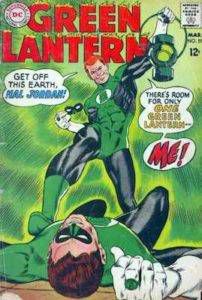 Kick his ass, baby, I got your flower.

Introduced in 1968, Guy was the second choice to take the ring that went to Hal – he was just as worthy, but a little bit further away geographically speaking. This bad luck was just the start of his own series of unfortunate events that culminated in him ending up in a coma on his first outing as a Green Lantern, from which he eventually woke with an aggressive, antisocial new personality. (It didn’t help that Hal, who’d befriended him, hooked up with his fiancee in the meantime. Don’t introduce Hal to your fiancee, folks.)

After spending the 80s as a parody of the ultra-macho red-blooded American male stereotype, Guy did a lot of maturing and is now a much more level-headed pain in the rear. He’s still not the first person you’d want to invite to tea with the vicar, but he’s reliable at both busting heads and training new recruits. (He was also temporarily a shirtless alien with a mullet who could turn his hands into guns, but we don’t talk about the 90s.) 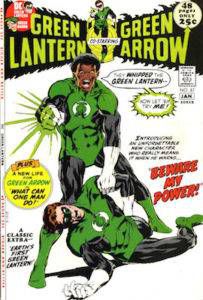 John was DC’s first black superhero. Introduced as Hal’s backup in 1971 as part of Green Lantern/Green Arrow, a socially conscious series that grappled with serious issues like racism, he called Hal out on his own prejudices and took down a bigoted politician. Unfortunately, it took until 1984 for DC to use him as more than an occasional lesson, when Hal temporarily stepped down from the Corps and John took his place.

Since then, John, who has variously been a former architect and/or former Marine, has been a steady member of the Green Lantern Corps, at least for those periods during which the Corps exists. He’s been married to fellow Lantern Katma Tui (see below) and widowed, did a stint in alternate space cop organization the Darkstars, kept watch over a patchwork planet built by a renegade Guardian called the Mosaic world, and is now the leader of the Green Lantern Corps. 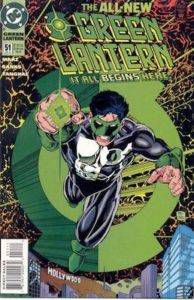 Following the destruction of his hometown Central City, Hal suffered something of a mental breakdown and/or became possessed by the Giant Yellow Space Bug of Fear Parallax, and proceeded to wipe out the Guardians and the Green Lantern Corps (hence John becoming a Darkstar and Guy becoming Alien McGunHands). In desperation, the last Guardian gave the last ring to the first person he encountered: young comic book artist Kyle Rayner.

Kyle carried the torch for a number of years as the only Green Lantern before restoring Oa and the Guardians. He’s born the power of both good and evil gods, and died and been reborn a couple of times, but that’s sort of par for the course for Lanterns, honestly. He also had a lengthy romantic relationship with… 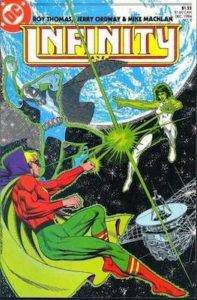 When Jenny-Lynn hit puberty, she abruptly turned green, and discovered the ability to manifest Green Lantern-style constructs without a ring. Soon after, she discovered that she was the long-lost daughter of original GL Alan Scott (and had a twin brother, Todd “Obsidian” Rice), and became a superhero, taking on the codename Jade.

Jenny-Lynn has served on Infinity Inc, the Outsiders, the JSA, and the JLA, and protected Earth as its Green Lantern while Kyle was unable to do so. Unfortunately, with her father now a) not old enough to have adult children and b) no longer sleeping with women, she and Todd presumably no longer exist. 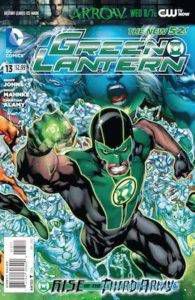 The ski mask is…maybe not the wisest costume decision, DC.

Simon is the first Middle Eastern member of the Green Lantern Corps and one of the few Muslim characters in mainstream comics. A former car thief and wrongfully suspected terrorist after a theft put him in the wrong place at the wrong time, Simon escaped questioning by the U.S. government when he was chosen by a malfunctioning ring fused from rings that had been worn by Hal Jordan and his greatest enemy Sinestro (see below). It’s taken some doing, but Simon has managed to mostly clear his name, shake off Sinestro’s efforts to mold Simon in his likeness, and join the Justice League. He’s currently partnered with… 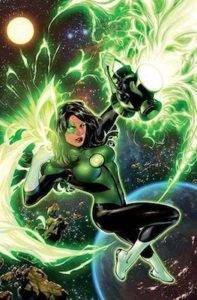 After witnessing a multiple homicide, Jessica struggled with PTSD and anxiety, which made her an easy target for the Ring of Volthoom (proud winner of The Most Comics Name Ever, 1960 and 2013), an alternate universe power ring that feeds on fear. She eventually helped to destroy the ring and was granted a proper Green Lantern Corps one instead, making her the first official female Green Lantern from Earth. One of the few mainstream superheroes with diagnosed anxiety, she’s currently serving on both the GLC and the JLA alongside fellow rookie Simon.

Arisia Rrab: One of the youngest Lanterns ever, who develops a teenage crush on Hal and uses her ring to age herself up so that he’ll date her. (He does. Hal’s gross.) Arisia spends some time as an Earth-based superhero after Hal eradicates the GLC.

Ch’p: He is a chipmunk Green Lantern, and that is amazing.

G’nort: Basically an idiotic anthropomorphic dog in love with Guy Gardner. I adore him.

Katma Tui: A leading resistance fighter of the resistance against Sinestro (see below), Katma became a GL reluctantly, but soon distinguished herself as one of the best. She was chosen to train John Stewart, who she eventually married. Soon after, she was killed by Star Sapphire in one of comics’ most notorious examples of fridging.

Kilowog: The Lanterns’ primary trainer, an enormous bulldog/hippo thing with a heart of gold from Bolovax Vik.

Mogo: A whole planet that’s a Green Lantern because comics are weird.

Sinestro: Hal Jordan’s mentor Thaal Sinestro was considered one of the Corps’ finest until it was revealed that he was using his power to enforce a totalitarian regime on his home planet of Korugar. He became one of the GLC’s most dreaded enemies, wielding a yellow power ring against their green ones, though he sometimes fights alongside the Corps against greater threats.

Soranik Natu: The daughter of Sinestro and niece of Abin Sur, Soranik is a doctor who reluctantly accepted a ring from the hated Green Lantern Corps in order to save her patient’s life. She eventually accepted her role as a Lantern and was romantically involved with Kyle Rayner for some time.

Tomar-Re: Like a space chicken with a dorsal fin on his head? For some reason this guy got his own posters when the movie came out. His son is Tomar-Tu.

Did that clear things up? Who’s your favorite Lantern? (Correct answer: anyone but Hal.) And check out our last multi-character breakdown here: Who the Heck Are All These Wonder Girls?