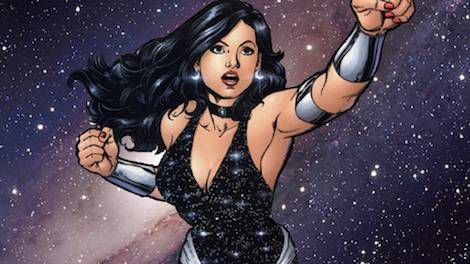 And if you did, maybe (probably) you encountered something about Wonder Girl, or multiple Wonder Girls, and were like “…What the Hades?” You’re not alone. Wonder Girl, or Donna Troy, or Troia, is infamous for having one of the most complicated, confusing series of retcons, reboots, and flat-out errors in superhero history, to the point that there are comics titled both “Who Is Donna Troy?” and “Who Is Wonder Girl?” So let’s see if we can shed a little light! 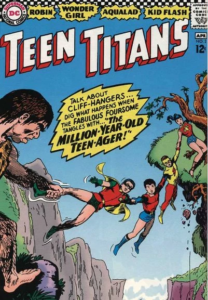 In the mid-60s, DC created a team of young sidekicks called the Teen Titans to prove how hip and with it they were. (Note: they were neither “hip” not “with it,” but that’s beside the point.) They pulled their members from the sidekicks who already existed in other comics: Robin, Kid Flash, Aqualad…and Wonder Girl.

Just one problem: Wonder Girl didn’t actually exist. Oh, sure, there were comics featuring a character called Wonder Girl, but that was just the OG Wonder Woman Diana as a kid. But since the Wonder Girl of Teen Titans was shown as a contemporary of the current day, adult Wonder Woman, who the heck was she? 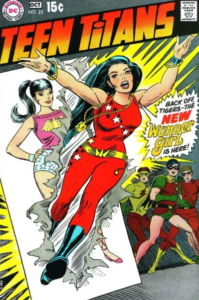 This costume is one of the all-time greats, quite frankly.

That question was answered in 1969, when a retconned backstory revealed that Wonder Girl was a baby Wonder Woman rescued from a fire. Unable to find her parents, Diana took the baby to Themyscira, where she was given superpowers and raised by the Amazons. Wonder Girl takes this retelling as an opportunity to don a new costume and her first real secret identity: Donna Troy. 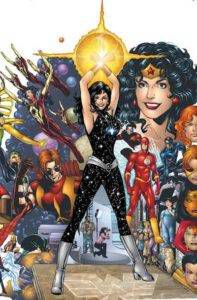 Another all-time great! Donna’s had some bad looks (check out that red and white Darkstar uniform on the left), but her classic costumes are – excuse the pun – wonderful.

However, in 1985 DC rebooted their entire universe and erased Wonder Woman’s history, necessitating a new backstory for Donna. Now she had been rescued from the fire by Rhea, one of the Titans of Myth, and raised in their world of New Cronus. Thus detached from Diana, Donna changed her codename to Troia and adopted another new costume. (Also, somewhere in there she got married, had a kid, briefly gave up her powers and became a Darkstar (basically a space cop), got divorced, lost her kid in a car accident, and got her powers back. Whew!)

Since it was kind of weird to have the former Wonder Girl not an Amazon or in any way related to Wonder Woman, Donna got another backstory reboot, and here’s where things get Extra Comics: it’s revealed that she was actually created as a mirror image twin of Wonder Woman by the sorceress Magala to be young Diana’s playmate, but then kidnapped by a villainess named Dark Angel (later revealed to be an alternate universe of Donna herself because why not?). Dark Angel cursed Donna to live multiple lives, each ending in tragedy, thus ensuring that all of her past origins are canon. Dark Angel’s kind of a jerk.

Eventually Donna defeated Dark Angel and was welcomed by Themiscyra as essentially a genetic sister of Diana and thus royalty. And everything was great!…until she was killed by a renegade Superman robot. You know. Luckily it turned out she wasn’t actually dead, just in outer space with amnesia, believing herself to be the goddess of the moon. Comics, everybody!

When DC rebooted their entire universe again with 2011’s New 52, Donna was introduced as an Amazon created by Wonder Woman’s enemies to usurp her; then Zeus made Donna the goddess of Fate, because Zeus loves doing stuff like that. These days, she remembers her classic origin as having been saved from a fire by Diana, but knows that memory to have been implanted by the villains who created her. Still, she’s chosen to be a hero, and also to…just kind of ignore all the complicated, conflicting origins in her backstory, and just go by her own name: Donna Troy. Probably for the best, D. 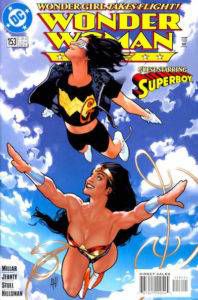 Look at this little dork with her fangirl t-shirt and her terrible wig! I love it.

Oh, did you think we were done? We’re only halfway through! The other Wonder Girl, Cassie Sandsmark, was introduced in 1996, well after Donna had taken on the Troia name. The daughter of an archaeologist and a huge Wonder Woman fangirl, Cassie borrowed magical artifacts in order to help Wonder Woman fight supervillains. She eventually returned the artifacts, but was given superpowers by Zeus in gratitude.

…Or maybe not just gratitude, because it was eventually revealed that Zeus was Cassie’s biological father. Oh, that Zeus! Cassie then briefly lost her powers, became Ares’s champion to regain them, joined a cult to resurrect her dead boyfriend – you know, your basic teen rebellion stuff. Despite these upheavals, she had a long stint on Young Justice before holding the Teen Titans together for many years pretty much single-handedly. 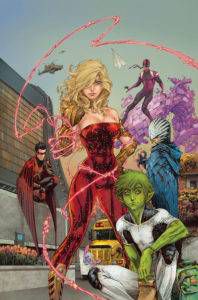 Donna’s costumes have largely been winners, but Cassie hasn’t been so lucky. This cover was controversial for a number of reasons but especially the OTT sexualization of a teenage girl.

As of the New 52, Cassie has been retconned as a teenage thief who stole a pair of magic bracelets from a temple before joining the Titans. Her mother is still an archaeologist, but her father is now a demigod son of Zeus, making Cassie a granddaughter of Zeus – and a niece of Wonder Woman, who is the daughter of Zeus in the current continuity.

…And that’s all the Wonder Girls! Cassie is not currently appearing in a book, but you can catch Donna in the Rebirth series of Titans.

Now for some reader participation: are there any other characters running around with multiple variations that you’re confused by? Captains Marvel? Lanterns Green? Let us know and we’ll break it down for you!