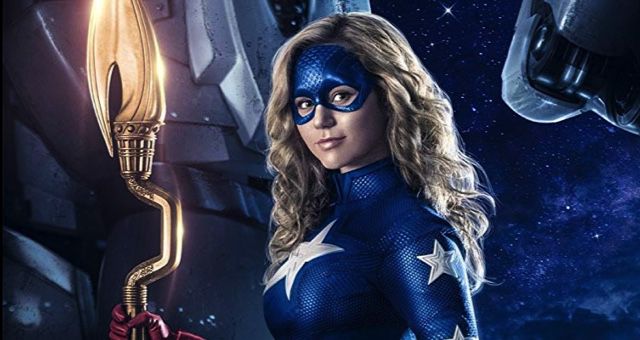 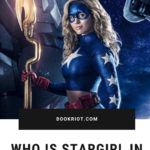 The CW’s crossover event, “Crisis on Infinite Earths,” gave us our first look at their newest superhero, Stargirl. Stargirl, alias Courtney Whitmore, is getting her own show on both DC Universe and the CW sometime this spring. But who is this pint-sized patriot, and why should you tune in? Here’s a quick primer on Courtney, what we can expect from the show, and where to read more about her: 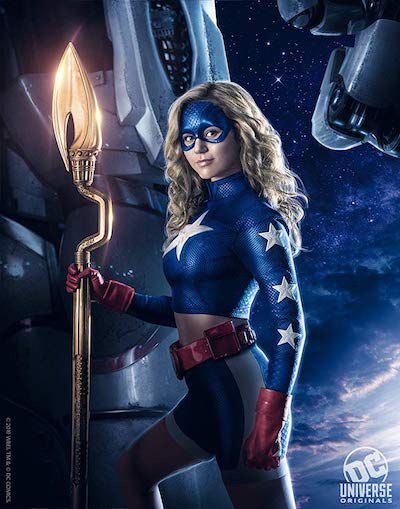 Back in 1941, DC debuted two new, hilariously named heroes: the Star-Spangled Kid and Stripesy! The Kid was Sylvester Pemberton, a bored wealthy tween who decided to become a superhero to fight Nazis, which honestly is better than almost any other thing bored, wealthy tweens tend to do. Joining him was his family’s chauffeur/mechanic Pat Dugan as his sidekick Stripesy, making them unique as a kid superhero with an adult sidekick. They had no powers, but didn’t need them because in the ’40s if you hated Nazis and could basically do a somersault that was considered Good Enough.

The Star-Spangled Kid and Stripesy faded out of popularity after World War II, along with most superheroes, but they cropped up again in the 1970s, still relatively young thanks to some time travel shenanigans. In his early 20s now, Sylvester changed his codename to Skyman. He also got powers of a sort when Starman, a fellow ’40s hero (but unrelated, despite their similarly stellar names), gave him his cosmic rod (get your snickers out here), an invention that allowed its bearer to fly and manipulate energy. Syl, being all about that hands-free life, turned it into a cosmic converter belt. Sadly, he was shortly thereafter murdered by a supervillain. A bereft Pat packed up all their gear and retired from superheroing.

Okay, you ask, but where’s Courtney? Well, in 1999, DC debuted a new character, a teenage girl named Courtney Whitmore who was none too happy that her mother had just married some loser named…Pat Dugan! After stumbling upon Sylvester’s gear in a box of Pat’s old stuff, Courtney decided, in a fit of teenage rebellion, to use it to become the new Star-Spangled Kid. When Pat realized he wasn’t going to be able to talk her out of it, he decided instead to join her so that he could keep her safe, fighting beside her in an Iron Man-style robot suit called S.T.R.I.P.E. (Special Tactics Robotic Integrated Power Enhancer).

Courtney soon joined the Justice Society of America, a team made up mostly of 1940s heroes and their legacies. After the original Starman’s son, Jack Knight, gives her the cosmic staff his father made (I told you to get your snickers out!), she changed her codename to Stargirl. She remained a core JSA member for years, until the 2011 New 52 reboot took the JSA out of the main universe’s continuity. She had a brief stint in the Justice League, starred (ha!) in the short-lived spinoff series Justice League United, and since then has been largely AWOL from the comics.

What Do We Know About the Show So Far?

Courtney will be played by Brec Bassinger, with Amy Smart as her mother Barbara and Luke Wilson as Pat. The backstory has been streamlined: Sylvester Pemberton (played, a little surprisingly, by Joel McHale) was Starman, not the Star-Spangled Kid, and a member of the JSA (in the comics, Sylvester and Pat were part of lesser-known teams like the Seven Soldiers of Victory and the All-Star Squadron); there’s no cosmic rod or belt and Courtney simply finds Sylvester’s staff in the basement.

From the characters who have already been cast, it looks like Courtney will be facing off against classic JSA villains and teaming up with members of Infinity Inc., the team Sylvester led in the 1970s. She’ll also have a stepbrother, Mike Dugan, who seems to be more of a kid brother type than the fellow teenager he is in the comics.

Each episode will premiere on the DC Universe streaming service first, then on the CW the next day. The show takes place in the Arrowverse’s Earth-2 (which will be especially familiar to viewers of The Flash), thus explaining the discrepancies between this version of the JSA and the Earth-1 version seen on Legends of Tomorrow.

Finally, and worryingly, the first trailer was apparently so bad (I never saw it) that the CW yanked it from the internet almost immediately.

What I’m Hoping For

1. Political relevance: If the CW is going to drape a character in the American flag and give her the mantle of a World War II–era superhero who fought Nazis, the show better have some pointed things to say about the contemporary rise of white supremacy and neo-nazism, or quite frankly it’s just wasting everyone’s time.

2. Merry, Girl of 1000 Gimmicks!: Back in the late ’40s, when the popularity of the Star-Spangled Kid and Stripesy was waning, DC gave Sylvester an adopted sister named Merry to jazz things up. Merry promptly became a practical joke–themed superhero herself, going by both “Merry, Girl of 1000 Gimmicks” and “Gimmick Girl.” She was so popular she took over the comic, kicking the boys out, which: hell yes. Later, in the ’70s, it was revealed that she had married a former supervillain, Brain Wave, and their son, the tormented antihero Brainwave Jr., eventually joined Infinity, Inc. Not only would Merry be a delightful addition in and of herself, Brainwave Jr. could lead to some interesting story possibilities.

3. Found family feels: The relationship between Courtney and Pat as she goes from resentment of her new stepfather to grudging acceptance to love is the emotional core of the original Stars and S.T.R.I.P.E. series, and I hope the show delivers on that. Wikipedia only lists Luke Wilson as a recurring character rather than a regular, and IMDB says he’ll only be in one episode, but I’m hoping these crowdsourced sites got their pre-pilot information wrong. Either way, I legit teared up when Courtney tells him in the first (non-pulled) teaser trailer, “The staff chose me…and I choose you.”

Where To Read More Stargirl 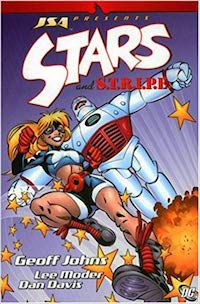 Courtney first appeared in Stars and S.T.R.I.P.E., a short-lived series by a rookie named Geoff Johns and artist Lee Moder. It’s a little rough in places but deeply charming, and Courtney is a believably awkward and flawed but engagingly heroic teen. The whole series is collected in two trade paperbacks, the first of which is out of print and a little pricey—but I’d be shocked if DC didn’t rerelease it in a more accessible format to coincide with the show.

She joined the JSA at the start of the fan-favorite 1999 series, which is available in both doorstopper omnibus editions (start here: JSA Omnibus Vol. 1) and more affordable trade paperbacks (start here: JSA by Geoff Johns Book One). She continued as a flagship member when the book was relaunched as Justice Society of America in 2007, which is also collected in trades; the print editions are out of print but you can still get them digitally. (And again, it’s not unlikely DC will reprint or recollect these stories to cross-promote the show.) 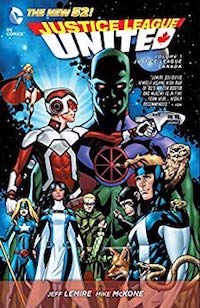 I’d skip her New 52 Justice League days, but Justice League United is a lot of fun and also available in digital collections. And if you’re looking for something a little different, she’s Supergirl’s foster sister in the female-centric retro pinup alternate universe of Bombshells.

Happy reading, and here’s hoping the TV show is as fun as Courtney deserves!