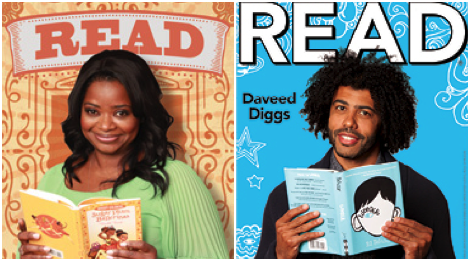 We know representation in books is important. We Need Diverse Books, among other organizations and individuals, has campaigned to make books featuring people other than those who are straight, able-bodied, cisgender, and white more accessible to readers around the world. Not only do we need diversity in books, but we need diverse role models promoting literacy and reading. When I received the most recent catalog of posters, bookmarks, and other items from the American Library Association, I flipped through the ever-popular celebrity READ posters (and for a blast to the past, check out these celebrity READ posters from the ’80s and ’90s), hoping to find celebrities who better reflected the kids who come into my library every day. 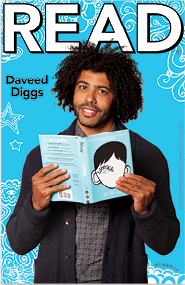 While a few faces of color looked back at me with a friendly smile and a book in hand, there weren’t many compared to the number of white faces. And, what was also troubling, when I brought the catalog in to work (a public library in a community predominantly made up of people of color) as a little social experiment, most of the kids I asked could not say they even recognized the people on the two-page spread, let alone name them.

I can appreciate that the American Library Association and its partners have limited funding and, perhaps, influence in this venue. It’s not like ALA is regularly rubbing elbows with folks in Hollywood and can get the latest and greatest on board with taking a slightly corny picture while holding a book. I get that. But looking at the options in the catalog, I got the sense that the organization was focusing on representing the people purchasing the posters rather than to the people the posters actually are for.

My kids don’t care who Seth Meyers is. They could give a hoot about Alan Rickman. Anthony Hopkins? Who’s that? They maybe-sort-of-kind-of-almost-barely recognize Daveed Diggs. John Cena was a somewhat familiar face, but not one that inspired so much excitement that they cared about the book he held or felt anything other than a half-hearted, “Oh yeah, I know him.” And, while there are a handful of black celebrities featured on these posters, there are, at present, fewer folks of Asian descent (Margaret Cho, Yo-Yo Ma, Aishwarya Rai, and Sendhil Ramamurthy are all available online) or Latinx (John Leguizamo) descent. There certainly weren’t any Native Americans featured. But don’t worry, there are two for Orlando Bloom. 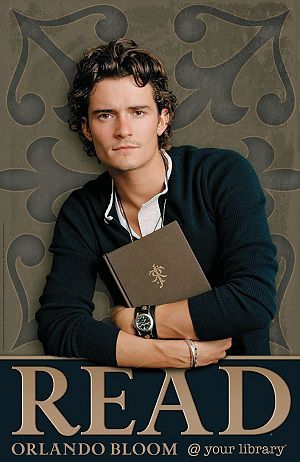 ALA can’t have a celebrity for everyone. And these posters aren’t the end-all of getting kids interested in reading. But it’s a struggle when the kids ask me why they should read or tell me reading isn’t cool and I can’t easily point to someone they admire demonstrating a love of reading.

I don’t think ALA isn’t trying, either—in fact, their READ posters are pretty diverse, relatively speaking. But that’s not enough and it doesn’t mean they can’t do better to more consciously select role models, particularly for their children’s posters. And, true, not all of the posters listed above are intended for children’s spaces—certainly Seth Meyers with his copy of Catch-22 is more likely to find a home in an adult space—but the reality is, even those holding picture books or popular children’s novels aren’t faces most kids, and especially my kids, who live largely in urban, low-income neighborhoods, recognize or care about. 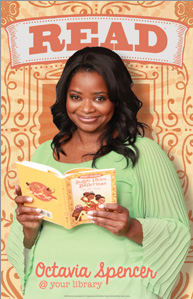 Next time, let’s see some Marshawn Lynch. Let’s see Cardi B. Let’s see Michael Jackson (yeah, okay, he’s dead, but one of my kids actually listed him as someone he admires, so run with it). In library school (which has to be accredited by the American Library Association if you want the degree to be worth anything in the United States), they emphasize talking with your customers and asking them what they want in programming, what they want in the collection, what they want in spacial designs—so I put the same challenge to the American Library Association: talk to some kids about READ posters; I think you’ll be surprised.