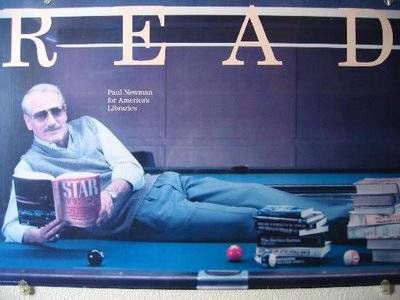 Those of us who work in libraries or have spent many hours in them can tell you one of the things that’s present in most — if not all — libraries is the infamous “READ” poster. Created by the American Library Association (ALA) in 1985, the “READ” poster features a celebrity posing with their favorite book or books. The celebrities are chosen because of their popularity, appeal, and visibility to a general audience, and the ALA tries to feature a range of diverse talent who would be great spokesmodels for reading to both adults and children.

Not every celebrity ALA approaches signs on, but when they do, they get to choose which book it is they’re “reading” in the poster. Believe it or not, celebrities who sign on to do the campaign don’t get compensated, either.

I thought it would be fun to take a trip down “READ” poster memory lane. Here’s a look at some of the celebrity “READ” spokes people of the 1980s and 1990s, along with their book of choice. It’s fun not only to see what they’re promoting in terms of titles, but it’s also neat to see their personalities shine through in how they’re choosing to share their message. Some of the books you can easily make out what they are, and I’ve noted where possible.

All posters are copyright of the American Library Association. A handful of these posters came through unattributed in my research, but I’d be more than happy to credit original sources where possible.

In 1985, Bette Midler helped kick off the “READ” poster campaign with her bed time get up and picture book choice. 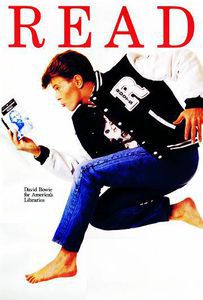 Hello, David Bowie in a letterman’s jacket. In 1987, Bowie modeled with The Idiot by Dostoevsky, and despite the fact he looks like he could pass as a teenager in this poster, he was 40 when it was taken. 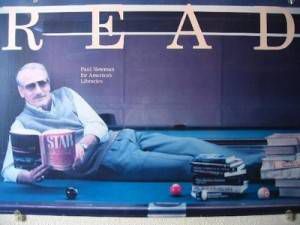 One of the rare landscape-style posters happened in 1987, and you have Paul Newman and his pool table pose to thank for that. It looks like he couldn’t pick just a single book, either, as he has a pile surrounding him and the bulk of them are spine-out. 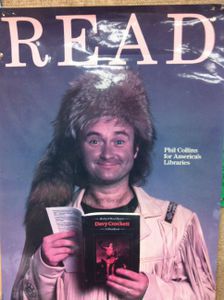 Phil Collins makes his “READ” poster debut in 1988. He’s not only showing off Davy Crockett, he’s dressed up for the part, too. 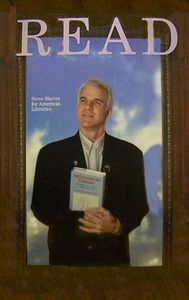 Steve Martin shows off some Mathematical Themes in his 1989 “READ” poster.

Tracking down images of the early “READ” posters was challenging and it was disappointing to not be able to feature those which included Oprah, Michael J. Fox, David Bowie, Sting, Goldie Hawn, or Mikhail Baryshnikov, to name a few.

But what was lacking in the 80s in terms of images of posters was made up for in the 1990s with celebrity library/literacy endorsements. 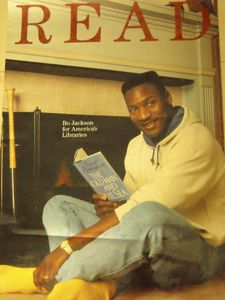 Bo Jackson settles in with The Old Man and The Sea in 1990. 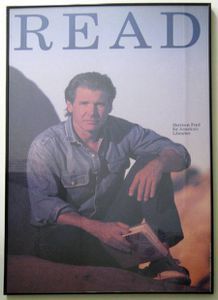 Harrison Ford puts on a serious face in what appears to be a hiking area in 1991. We can’t see the spine nor the cover of this book. 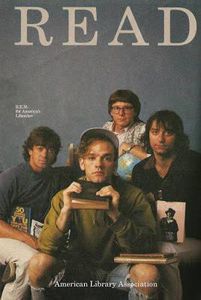 Let’s hear it for the boys of REM, who have more books in this post than they have people. Bonus points for also including a globe — one of those fixtures you’d also expect to see in a library. This one’s from 1991. 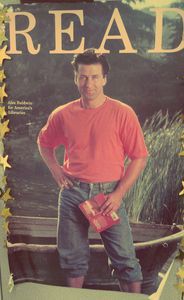 Alec Baldwin dresses the part in his 1992 “READ” poster, featuring The Adventures of Huckleberry Finn. 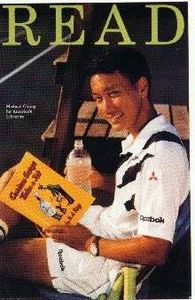 Another trip to 1992 takes us to Michael Chang and his endorsement of Curious George Takes a Job. 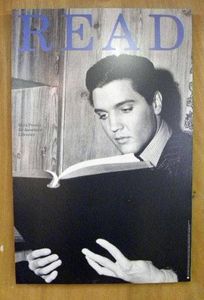 For some reason in 1994, ALA managed to resurrect Elvis for the sake of a “READ” poster. It appears to be a book without a title, but he’s absorbed in it in a way most celebrities in these posters aren’t.

Even with a slight burr to the image, Barbara Walters and her book of choice, The Little Prince, make a statement in this 1996 “READ” poster. She’s got a really fancy copy of that book, too. 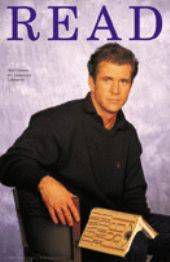 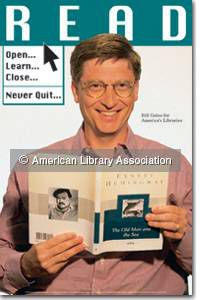 How about this one, which is about as perfect a “READ” poster as can be? Here we get Bill Gates, along with an old-school task bar (or, well, modern in 1997), and his reading material of choice, The Old Man and The Sea. Perhaps he and Bo Jackson could start a book club together.

This 1997 poster featuring LL Cool J is up there on my personal favorites list. So simple and yet — why wouldn’t you be reading? His pick is titled The Children’s Health Food Book. 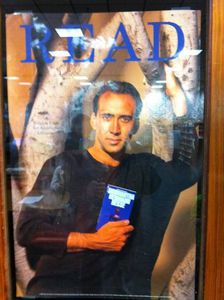 There were a handful of female musicians who graced the “READ” poster in the late 90s and early 00s, including Ani DiFranco, pictured above. Others included Melissa Ethridge, Britney Spears in 2001, and the Indigo Girls in 2000. DiFranco is reading Woody Guthrie: A Life.

Many other celebs did their part in promoting libraries and literacy in the 1990s on “READ” posters, too, including the Olsen Twins, Whoopi Goldberg, The Power Rangers, Michelle Kwan, Shaquille O’Neal, Tim Allen, Antonio Banderas, and Roseanne Arnold, to name a few.

A Few I Can’t Leave Out…

I wanted to limit strictly to “READ” posters from the 1980s and 1990s, but there were a couple of gems from the 00s I couldn’t not share. 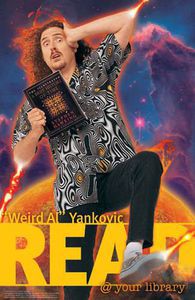 “Weird Al” Yankovic takes to his roots in this 2001 technicolor, gravity-defying, space-set “READ” poster. He is, of course, holding Stephen Hawkins’s A Brief History of Time.

Though I wouldn’t be surprised if part of “Weird Al”‘s inspiration came from the very poster Stephen Hawking did in 2000. He’s defying space and time while Marilyn Monroe. How can you not love this? 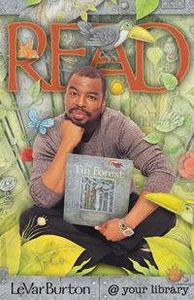 It wouldn’t be a love fest for reading without LeVar Burton having a chance to be part of the campaign. Here he is modeling The Tin Forest in his 2002 poster.

Know of other great vintage ALA “READ” posters? Have one hanging on your wall or in the back of one of your closets? You can check out thumbnail scans from the ALA catalogs selling these posters on this blog, too.