Last week, Adam Johnson won the 2013 Pulitzer Prize for fiction, much to the relief of many who follow the American literary scene.  The Orphan Master’s Son has been widely admired and just a few weeks ago won The Tournament of Books, which has proven to be a pretty good indicator of public sentiment around particular titles.

What did come as a surprise were the two other finalists: Eowyn Ivey’s The Snow Child and Nathan Englander’s What We Talk About When We Talk About Anne Frank. Both titles had their fans, but neither had been considered or mentioned as major award contenders before now. When we hosted our live-chat to talk about the Pulitzer prizes on announcement day, I and others found their nominations puzzling.

I didn’t think much more about it, as a three-person jury can of course come up with an idiosyncratic list. But then the below interaction on Twitter between Ron Charles, book critic at The Washington Post, and Sam Sacks, literary critic at The Wall Street Journal, caught my attention: 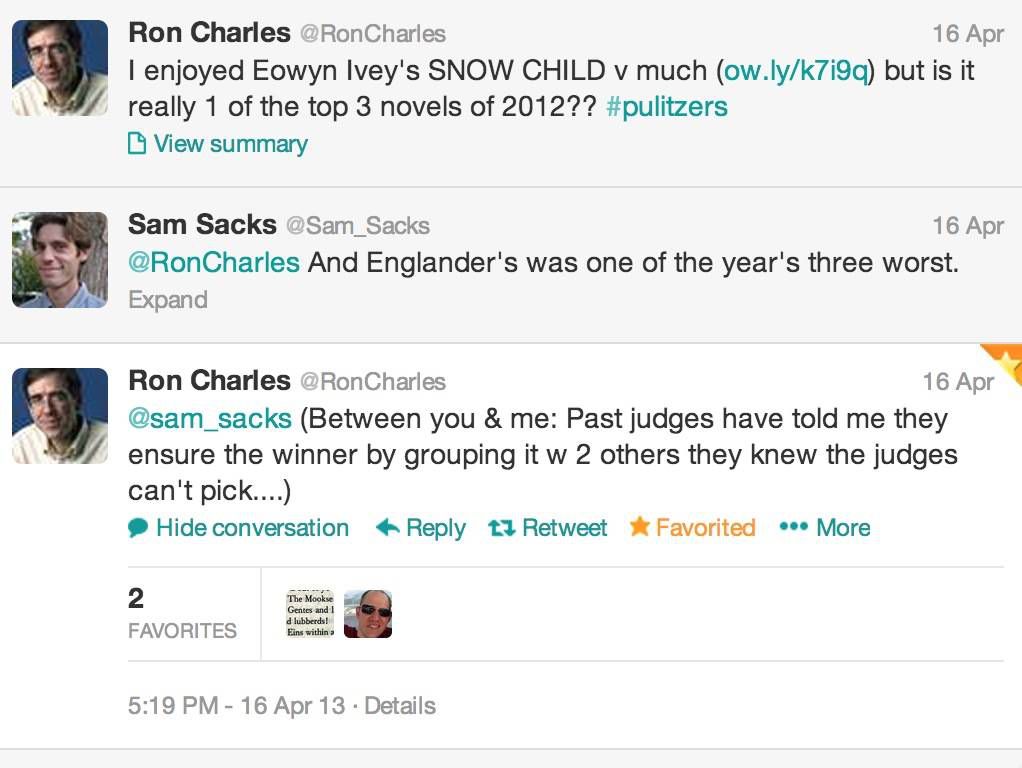 Now, this is only interesting if you know how the Pulitzers are awarded. The three person jury selects three finalists and presents them, without ranking or comment, to the rotating 18-person Pulitzer board, who selects the ultimate winner.

It is conceivable that the jury could stack the deck in a given year so that one of the finalists would be considerably more likely to be picked than the other two. And, coming off a year where the Pulitzer caught a lot of heat for not selecting a fiction winner, it might be tempting to present the board with an easy choice.

Charles doesn’t seem to be commenting on this year’s award, just that someone at some point told him that some award was arranged like this. Assuming for the moment that Charles got good information, it’s interesting to go back and look at past winner/finalist combinations and see if there are other years that might have been stacked. (In my own quick overview of the recent fiction awards, 2004 and 2005 seem possible candidates).

If something like this were to happen, it wouldn’t necessarily violate the letter of the Pulitzer process, but it seems to me that it would violate the spirit of it. At the very least, readers who pick up titles with that “Finalist for the Pulitzer Prize” sticker (as many do) are being somewhat misled.