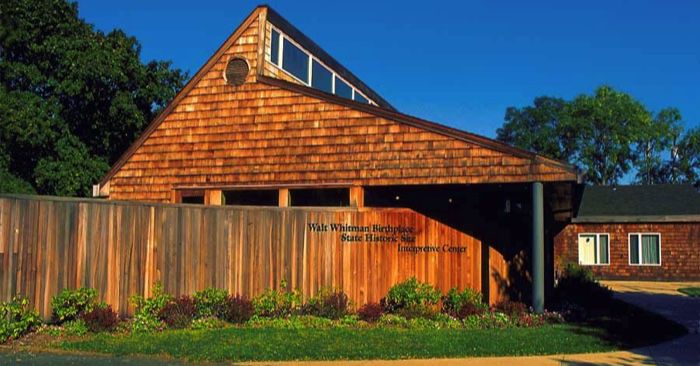 Huntington, Long Island, has several Walt Whitman-named places including streets and malls. While these places are commercial and directional, they pay homage to the poet Walt Whitman. The true home of Walt Whitman lies on Old Walt Whitman Road in Huntington Station, New York. Literally, his home stands on the grounds of a museum and educational center devoted to him: Walt Whitman Birthplace Association.

Executive Director of the Walt Whitman Birthplace Cynthia Shor gave me a brief summary of how Huntington fits into Whitman’s story. Walter Whitman was born at the birthplace site in 1819 in a house built by his father, Walt Sr., nine years earlier. The family moved to Brooklyn when Walt Jr. was 4, but he returned as a young adult to teach and write. He also founded the newspaper The Long-Islander, which still circulates today. Shor says, “Long Island, of course, includes Brooklyn, so Walt really never left Long Island, just the Huntington area.”

What the Birthplace Offers

Caitlyn Shea is the Event & Media Director for Walt Whitman Birthplace Association. While her position has always been filled with planning and coordinating, her duties switched into high gear when the pandemic hit in March. Some of the programming was canceled. However, she was able to shift a lot of it to an online platform.

If you’re looking to fulfill your intrigue about literature, history, art, culture, and music with a Whitmanian bent, then this is your place. All year long, you can attend one of the very many events WWBA hosts. That means if you can’t visit in person, you can still participate in the festivities, talks, readings, and other excursions. Yes, excursions—recently, a Whitman scholar took a hike up Jayne’s Hill while broadcasting live. (You can see it here).

Other exciting events have included chats about Whitman and race, a children’s masterpiece painting workshop, and weekly poetry readings. Their current Poet-in-Residence is Juan Filipe Herrera, author of Notes on the Assemblage. Herrera conducted a virtual master poetry writing class and a featured reading. You can find this and more past and future virtual events here.

Which Whitman Should We Read?

Because I have a penchant for sci-fi, science-related, and astro-related poetry, one of my favorite Whitman poems is “When I Heard The Learn’d Astronomer.” I got to share it during a reading I conducted for WWBA back in April (full disclosure: They named me Long Island Poet of the Year 2020, so I had the good fortune of giving a reading!)

Shor chooses “There Was A Child Went Forth” as her go-to poem. She says, “the poem personifies Whitman’s intrinsic connection to the Birthplace site, wherein he recounts as an adult his first and lasting impressions of the site; … [and] it activates in myself my own recollections of my childhood imprinting of my native environment in Iowa, and his joy of remembrance activates my own joys of remembrance. We are all imprinted with the ecology of our childhood environment and this contributes to our substance of self.”

Shea’s poem of choice, aside from her love for “getting lost” in “Song of Myself,” is “A Clear Midnight.” She says, “It still feels very contemporary and although it is one of his shortest poems [and] the line ‘Night, sleep, death and the stars’ has a haunting quality that really sums up the bold and passionate way Whitman approached the world.”

When Can We Visit?

Right now, Walt Whitman Birthplace is open for visitors in person. With safety in mind, visitors are welcome to explore the grounds and the indoor exhibits.

Shor’s favorite spot is standing in front of the stage when an event is unfolding. Shea loves to be in the middle of the Interpretive Center that showcases portraits and informational panels about Whitman and has floor-to-ceiling glass doors through which you can see the historical house. She’s captured many moments of poets, scholars, and newlyweds in this room. She says, “That spot captures the essence of the site and connects Whitman’s spirit and legacy with contemporary presenters and our audience.”

You can head inside to these spots or you can remain outdoors in the gardens and walks. You can peer inside the Interpretive Center through the large windows. You can also stroll by Walt’s house out back. This small spot of land holds so much history and literature. It’s definitely worth a visit or virtual drop-in.

For more about Whitman, you can check out the NYPL experience and the Morgan Library experience.