I have a friend, we’ll call her K, who used to work for the city newspaper. Like other newspapers, this paper got sent a lot of books for review, many of which ended up not being reviewed and left on a bookshelf where anyone could grab copies to take home. 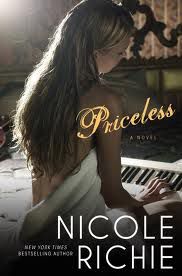 One fateful afternoon last spring, K came across a copy of a book called Werewolf Smackdown, which she (sarcastically) suggested I might enjoy reading and blogging about. I turned her down (not because the book seemed bad, but because it’s not a book for me). The next afternoon she stumbled across an even more awesome find: Priceless by Nicole Richie.

After a series of escalating literary dares, we decided that each of us would read one book and report back. The goal? A life-enriching reading experience where we’d be forced to address our pre-conceived notions about novels by celebrities and campy vampire genre fiction. After a coin flip, I ended up with the auspicious honor of reading Priceless and the Not So Great Expectations Book Club was born.

(As a side note, another friend found out about our experiment and joined. She picked up Topless Prophet: The True Story of America’s Most Successful Gentleman’s Club Entrepreneur. Classy!)

I finished Priceless last April, then promptly wrote a 1,000 word epic on the book that I never ended up posting on my blog. Rather than let 1,000 words of bitter sarcasm go to waste, I’m sharing my “review” here on Book Riot. Enjoy!

It’s hard for me to express just how low my expectations for Priceless were. I don’t like celebrities or gossip or fashion or reading about beautiful people. I just find it… annoying. And I wasn’t expecting Richie to be a Great Writer or anything. I mean, all you have to do is look at the book cover to know how this book is being sold: the name of the author is about twice as big as the title of the book. This is a book By Nicole Richie… and that’s about the best thing going for it.

Because I don’t think I can summarize this book without wriggling a pencil around in my ear and turning my brain to mush, I’m going to just be lazy and give you the rundown from Google Books:

Tall, blond, and willowy, this twenty-two-year-old seems to have everything going for her. She’s rich and gorgeous, a talented singer, and has just returned to her Park Avenue penthouse after a year studying in Paris. But since her mother’s tragic death years ago, her father, an extremely successful financier, has been her only family and if she’s being honest, her only true friend. All that changes when Jacob Williams is arrested on charges of fraud, and the SEC freezes the family’s bank accounts. With her father in jail and her partying pals suddenly scarce, Charlotte escapes Manhattan and heads to the one place she doesn’t think anyone will come looking: New Orleans. Determined to rebuild her life, Charlotte moves in with her beloved former nanny and finds a job in a local restaurant. Between trying to make ends meet and hiding from her past, she meets Kat, a fellow fashionista who introduces her to the best of the Big Easy’s bohemian style. With Kat by her side, Charlotte begins to haunt nightclubs, securing singing gigs that soon begin to heat up as does her friendship with a local boy, Jackson. But Charlotte’s being followed by an angry stalker who wants nothing more than to destroy her for her father’s crimes. And with Mardi Gras just around the corner, the masquerade has only just begun . . .

Just re-reading that makes me want to bang my head on a desk. Moving on…

I tried going into the book with an open mind. When we were contemplating this dare, K told me she thinks Nicole Richie is smarter than she appears, that she actually has some self-awareness and a sense of humor about herself and being a celebrity. So as I read, I was looking for those hints of acknowledgement about how absurd this whole idea is.

While that might be true, Richie just didn’t show off those smarts in this book. There are some early jokes in the book that made me think, “Hey! Maybe she gets it!” but they were quickly overshadowed by the fact that Charlotte fundamentally never changes throughout the story, despite the fact that her flight from New York to New Orleans is supposed to take away her spoiled trappings and expose the “real Charlotte.”

See, after Charlotte leaves New York to head to New Orleans, she’s immediately taken in by the woman who cared for her when she was a child. Charlotte worries that she’s only leaving New York with $5,000… how could she possibly survive on that, even when she’s crashing on a couch for FREE? When she goes out to “find a job,” she stumbles into a vintage clothing store and is immediately befriended by one of the most popular girls in New Orleans, the daughter of a rich family in the city. That night, they get dressed up and head to a club. But, it’s different! This time they’re decked out in sweet vintage clothes instead of current designer duds. See, Charlotte is CHANGING! For the better!

It soon comes out that Charlotte has an amazing singing voice, something she’s known and practiced since she was a child. With some prompting from her new, honest and nice New Orleans BFF (who is contrasted with her awful former NYC BFFs), Charlotte starts singing, joins a band, and finds her calling as a jazz singer (plus the love of a super hot piano-playing musician!). Charlotte’s transformation from spoiled to capable to downright successful happens so quickly you might get whiplash.

It was just SO HARD for me to feel sorry for a character who is beautiful, hot, and secretly super talented when her biggest problem is that she’s not quite as rich as she used to be and has to — gasp! — shop at Target. There’s no challenge to that, nothing that makes her struggle, and I just don’t care. Any sense of self-awareness, from Richie or from Charlotte, just seems fake because the whole idea of this book is just so absurd.

However, as K pointed out to me, Charlotte isn’t the kind of person you try and relate to; she the kind of girl the target audience of the book (which emphatically and assuredly does not include me) will aspire to be — beautiful, talented, and easily loved by people who can see past their exterior to the “real Charlotte” inside. There’s a point to that, and I guess it’s a reason people would read this book, but it’s not why I pick up most of the things I read.

And yet… despite all of those awful, awful things and all my complaining to K about just HOW AWFUL this whole experience was, I felt oddly compelled to finish the book. Even though I knew what was going to happen… I still had to read to find out how the things I knew were going to happen were actually going to happenn. It’s a paradox I can’t even begin to explain.

Priceless was absurd and so full of people that I didn’t actually like very much that I had to stop myself from sighing melodramatically at every page turn. But I KEPT READING IT because reading Priceless was sort of like watching a reality television show — even if I find it annoying and have a pretty good idea of how the ending is going to play out, I still find myself compelled to keep watching to see how much of a train wreck the whole story is actually going to turn out to be.

Have you ever read a book on a reading dare? Were your expectations changed? What book would you dare someone to read?