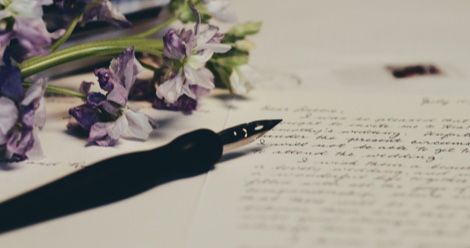 Twenty years ago, when we first lived together, the thought of typing my now-husband’s stories was so romantic to me that I almost couldn’t bear it. I even bought him a tape recorder so that he could dictate stories and ideas for me to later type up. This plan did not go well, as he is perfectly capable of typing and in fact does so faster than he can speak and only slightly slower than he can think. We abandoned it quickly, and I was devoted enough to be disappointed. The thing is, I was a writer too. So why did I want to prioritize his work? I still don’t know the answer, but I have discovered that A) this is common behavior among literary wives, and B) I am totally fucking over it and over literary husbands in general.

I had not, at the time, heard of Vera Nabokov (though I had read Lolita after my high school crush said it made her think of me, a comment that I have never figured out or gotten over), but if I had, that’s who I would have been trying to emulate. Vera met her husband Vladimir through her publisher father. According to a single clause in a single sentence on her Wikipedia page, she had a budding writing career at the time, which never went any further. (It doesn’t even merit a full sentence!) She worked as a secretary and translator to pay the bills, and did the same for Vlad (for no money), while raising their son (presumably with no help from him) and keeping house (she said badly, I say who gives a damn). She also learned to drive so she could be his chauffeur, and carried a handgun as his acting bodyguard. I infer from everything I’ve read that she also performed extensive emotional labor, preventing him repeatedly from burning his drafts of Lolita (which was, in hindsight, a mistake).

People in relationships make choices that sometimes do not look equitable or reasonable from the outside. I try very hard not to judge, but it is difficult when a marriage is, to my eyes, so dreadfully unbalanced. What on earth did Vlad do for Vera? I can find no evidence of anything whatsoever. I can also find no evidence of her writing, or of her aspirations prior to meeting Vlad. I am very tired when I think about Vera.

There is a passage in The Bell Jar that absolutely knocked me on the floor when I first read it:

But an English major who knew shorthand was something else again. Everybody would want her. She would be in demand among all the up-and-coming young men and she would transcribe thrilling letter after thrilling letter.

The trouble was, I hated the idea of serving men in any way. I wanted to dictate my own thrilling letters.

There is no question that The Bell Jar is fairly autobiographical, and there is no question that Sylvia Plath died by suicide a few years into an attempt at being a writer and a mother and the wife of a writer. It has, somewhat recently, come to light via Sylvia’s letters that Ted Hughes was abusive, which I personally think should have been obvious already but I suppose it’s helpful in some abstract way to know it for sure.

I am a writer and a mother and the wife of a writer, and I want to dictate my own thrilling letters. I don’t want to be Vera, I want to have a Vera. But it turns out that Veras are still by and large only available to men. This phenomenon is evident particularly in the way that (male) writers thank their spouses in the acknowledgments of their books.

A few years ago, Alexis Coe wrote in Lenny Letter about the disconnect she had noticed, where male writers thank their wives for support (i.e. doing everything so they can write) and female writers rarely do the same (most likely because they are writing and caring for the children and doing the laundry and cooking and cleaning and cetera.) Where can I get a research assistant slash editor slash (I assume) sex goddess, please?

Nearly a year later, Bruce Holziger tweeted about a verrrry similar discovery—specifically, that men are thanking wives for typing their manuscripts, something that apparently these male writers are too important and/or inept to do—and got a lot more attention, spawning a hashtag (#ThanksForTyping) and a Buzzfeed article that featured a depressing assortment of tweets using the hashtag. (I could go on for several paragraphs here about how a woman wrote it first but when a man said something it got widespread attention, but, well. Those paragraphs would be better summed up by an emoji of a trash can or possibly a smiling poop.)

What I want to know is: who would I thank in my acknowledgments? Without a Vera, how will I ever write enough to be worth anything? To even have acknowledgments? Where will I dictate my thrilling letters? Is there even any point in trying? I guess I want to be the imaginary male author described by Rufi Thorpe in her devastating essay “Mother, Writer, Monster, Maid”: “Your father is Jodi FUCKING Picoult.” (If you click only one link in this essay, let it be that one.)

But Jodi Picoult manages to have a writing career without a Vera (or, put another way, acting as her own Vera), and so have many other literary wives, including Shirley Jackson, whose husband Stanley Hyman was The Worst. Stanley, who somehow was better-known during their lifetimes than she was, took great pride in never having changed a diaper (they had four children), and while that was de rigueur for the time, he also could not boil an egg, make toast, or even pour his own coffee. (Source: Ruth Franklin’s biography A Rather Haunted Life and Shirley’s “fictional” family stories, Life Among the Savages and Raising Demons). Shirley did everything for him and the children, kept house, entertained, and wrote nonstop, while Stanley occasionally wrote for The New Yorker, having affairs in the New York literary scene. Later, he taught at a women’s college, having affairs with his students (he did not believe in monogamy or care that his wife wanted it).

Stanley, at least (and I do mean least), did not make any effort to stop Shirley’s writing career; in fact, they met because he read a story of hers and declared that he was going to marry the author. Compare him to Ted Hughes, or perhaps to John Emerson, who went so far to discourage his wife Anita Loos from having a career as to fake an illness in an attempt to prevent her traveling. Like Hughes and Hyman, he was also unfaithful to his wife.

In the last few years, we have seen a landslide of men’s careers being put on pause (though most of them have quickly resurfaced) due to the way they’ve treated women and young boys as sex toys instead of people. Inevitably, a backlash has begun of people crying, “But what of their talent?!” as though somehow the world needs the art of abusers more than it needs that of the abused. Shirley died and Stanley immediately remarried. Sylvia died and Ted went on to publish poems for 35 years, both his own and Sylvia’s (taking the profits, of course, and edited as he saw fit). Anita suffered for decades, lost most of her money to Emerson, attempted multiple times to divorce him (he refused), and finally went off and enjoyed a successful Hollywood career as a screenwriter in spite of him (she managed, at least, to outlive him by 25 years).

I still like my husband. He works a full-time job and comes home and does half the housework. Well, more than half. Most of the housework. He’s an equal parent and does not expect me to be his typist. And yet I find it difficult to not resent the fact that I once wanted to be his goddamn secretary.