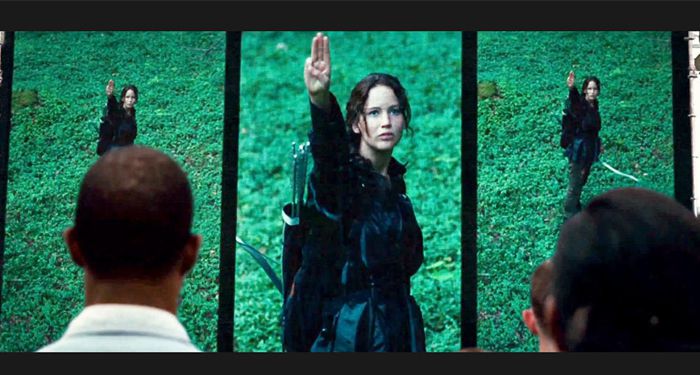 Although the pandemic shut down the world in 2020, protests around the globe didn’t stop. In Hong Kong, protesters continued to rally against China’s security law. In Thailand, thousands protested against the government. In Myanmar, protesters recently took to the streets to condemn the military coup.

Aside from the goal to push back against tyranny, the three significant aforementioned protests had another thing in common: Protesters openly made the three-finger salute from The Hunger Games series. The said gesture has now become a common sight in many pro-democracy protests in Asia and has since become a symbol of resistance to tyranny in the region.

The three-finger salute first appears at The Hunger Games book when Katniss Everdeen, the protagonist, volunteers for her sister Primrose at the 74th Hunger Games. “At first one, then another, then almost every member of the crowd touches the three middle fingers of their left hand to their lips and holds it out to me,” author Suzanne Collins writes. According to the book, it is an old and rarely used gesture of District 12 and is occasionally seen at funerals. It can mean “thanks,” “admiration,” and “good-bye to someone you love.”

Later in the book, it reappears as Katniss pays her respects to Rue, a fellow tribute who dies by helping her in the arena. “I press the three middle fingers of my left hand against my lips and hold them out in her direction. Then I walk away without looking back,” it reads. The same scene also appears in the film, but Katniss makes the gesture directly at the camera. Then, the residents of District 11 follow suit, which triggers an uprising.

The three-finger salute is also mentioned in the second book Catching Fire. As Katniss visits District 11 to deliver a speech commemorating Rue, the crowd makes the gesture. “Every person in the crowd presses the three middle fingers of their left hand against their lips and extends them to me,” the book reads.

Katniss, however, doesn’t realize that the innocent act she does to pay respects to her loved ones turns into something dangerous — a symbol of silent rebellion against the Capitol. The three-finger salute is sometimes accompanied by the four-note Mockingjay tune, and the one who initiates it among the crowd in District 11 is shot in the head.

The three-finger salute became immensely popular when the film adaptation of Catching Fire, starring Jennifer Lawrence, came out in 2014.

All the same, the gesture didn’t actually originate from The Hunger Games series. It is used by the members of the Scout and Guide organizations around the world since 1908. For them, it signifies a different concept that is unrelated to the resistance.

The Three-Finger Salute Is Taking On a New Meaning

The three-finger salute was first adopted by protesters in Thailand during the May 2014 coup d’état. During that time, The Hunger Games: Mockingjay Part 1 was being screened. Several teenagers made the gesture in public against the military junta, prompting their arrest. The junta saw it as a threat, and the gesture was eventually banned.

The three-finger salute, which shares similar connotations with the raised fist, has now become a symbol of pro-democracy protests in Asia.

What Suzanne Collins and the Movie Producers Think

The Hunger Games series has sold over 100 million copies worldwide. Though the books and their film counterparts are influential among young people in today’s political landscape, Suzanne Collins has not made any statement regarding the protests.

In an article published by The Daily Beast in 2017, a representative for Collins said that the author would not be commenting on the student protests and the actions of Thailand’s military junta. The article also mentioned that Collins has a policy of generally not commenting on matters related to The Hunger Games series.

Five years later, as more protesters in different countries have adopted the controversial gesture from the books, Collins hasn’t changed her position.

Meanwhile, when the protests in Thailand sparked in 2014, the team behind the Mockingjay film were initially silent about the matter.

“They are betraying people who are essentially playing real-life versions of the protagonists in the film…They should all speak up, they inspired people, and they should stand with them,” said Brad Adams, executive director of Human Rights Watch’s Asia division, speaking to The Daily Beast.

Eventually, the producer of the first two films, Nina Jacobson, spoke up. “I find it moving that our movie has become part of a language of resistance,” she told BuzzFeed News in 2014.

Jacobson recently said in a CBS News interview that “she never could have imagined the movies having such an impact on real life.”