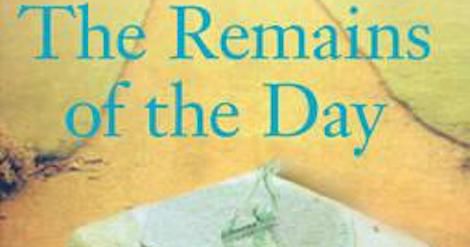 Let’s talk about the father-son relationship in the 1989 Booker Award-winning The Remains of The Day by Nobel laureate Kazuo Ishiguro. Let’s not talk about why it took me so long to get around to reading this wonderful book that Maxine Hong Kingston called, “wonderful in every sense–story, language, and understanding.”

Okay, fine, let’s do talk about it.

I had heard that the book was…cold. And that the movie was better, okay? But don’t you make the same mistake. To start, here’s an Ishiguro reading pathway.

The Remains of The Day Repression 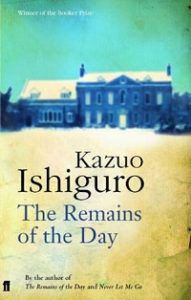 Of  impressive repression of emotion there is MUCH. MUCHLY. Perhaps because I am a parent what gutted me beyond The Remains of the Day‘s stunning, larger WWII historical themes and the non-starter relationship with Miss Kenton (played in the movie by Emma Thompson), was the exceedingly tiny lost sequin parlor drama of the relationship between the father and the son, Mr. Stevens, the exemplary butler father and Mr. Stevens, an equally exemplary butler son. Between them the emotion is tamped down so far that this is a typical exchange:

“My father had opened the curtains and was sitting, shaved, and in full uniform, on the edge of the bed where evidently he had been watching the sky turn to dawn…The oil lamp beside his bed had been extinguished, and when I saw my father glance disapprovingly at the lamp I had brought to guide me up the rickety staircase, I quickly lowered the wick.”

“I have come here to relate something to you, Father.”

“Then relate it briefly and concisely. I haven’t all morning to listen to you chatter.”

“In that case, Father. I will come straight to the point.”

“Come to the point then and be done with it. Some of us have work to be getting on with.”

Both father and son possess that all-important quality in this book referred to as “dignity.” But the stiff-upper-lips-of-the-kind-that-never-quaver were  too much for me. I choked up when the father died. Mr. Stevens had Miss Kenton close his father’s eyes. He went quickly back to his post, polishing silver for some British Nazi-sympathizer big wheels! I almost threw the book across the room, shouting, “Not over my dead body!” and rushed to my children to shower them with hugs and kisses of the kind never, ever seen in any room at Lord Darlington’s.