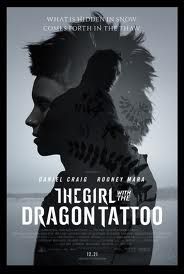 With books like The Great Gatsby or The Hunger Games, fans are worried that the film adaptations will do the original work disservice. There is another class of book, though, where even fans of the book suspect that a film version of a book might even be better than the book itself. (The list of movies that are better than the book they are based on is relatively short, but has some notable entries, including The Godfather and Schindler’s List.)

Look, this isn’t a great book, but it is mesmerizingly compelling (The thing is like meth, you start it and then it’s 10 hours later and you don’t really know what happened or if you really enjoyed but you have to do it again). It has some structural similarities to Fincher’s great Se7en (pair of mismatched investigators on the hunt for a sadistic killer), but I would argue that GwtDT does what Se7en does better. Salander and Blomkvist are more interesting and have a more complicated relationship than Freeman/Pitt characters. And the villian of GwtDT is not as cartoonish as the Spacey’s evangelist-Joker John Doe. Se7en relied on New York’s grittiness, but GwtDT goes the other way and uses the seeming tranquility and social order of Scandinavia as a mask for the utter depravity at the center of the story.

There’s a chance that this is the movie that David Fincher was born to direct. Se7en was small and polished; Fight Club was more about Pahlaniuk’s original work and the twist end; and The Social Network was the Sorkin show. Here, Fincher gets good material that he can make great. (Zodiac is the underrated Fincher gem, and I think probably gives the best preview of what GwtDT might be like….except waaaaay more violent and disturbing. And with more frozen pizza and Ikea).

The whole movie will come down to Craig as Blomkvist and Mara as Salander. Craig’s casting is cagey; Blomkvist is a James Bond figure if James Bond were a squidgy leftist journalist–womanizing, capable, likable, and yet, at least in Craig’s version of Bond, also endearingly vulnerable.

There’s not a wide range of Rooney Mara footage out there, but honestly I’m not sure how much acting she will have to do, since Salander central characteristic is her reticence. We’re going to get  a lot of shots of Mara not talking and staring. From the production stills made public over the last few months, it appears as if they’ve done a good job of disappearing Mara into Salander.

To be honest, I can’t see what’s going to go wrong here. There is a chance that Fincher overdoes the sexual violence to the point that the movie becomes unwatchable (think the gimp sequence in Pulp Fiction but for like the last 45 minutes of the film instead of just a few minutes). There are also rumors that the plot has been tweaked in the back half of the film, but while the plot is what makes the book go, I don’t think any particular plot point is untouchable.

Sometimes you get the right person for the right movie.