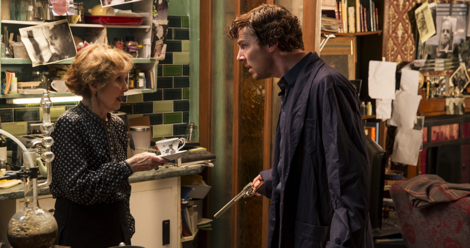 To celebrate the birthday of Arthur Conan Doyle, we’re writing about all things Sherlockian/ACD today. This Sherlock Holmes character quiz is sponsored by The 7 ½ Deaths of Evelyn Hardcastle by Stuart Turton.

Sherlock Holmes is memorable not only for the consulting detective himself, but also the cast of secondary characters who push his buttons, cheer him up, or support him through thick and thin. Without this greater cast of characters, there would be no comic relief, no romantic tension, and no fun. When I was a kid, Piglet was my favorite of all Winnie the Pooh’s friends. Once, I went to the Disney store in the mall and asked if they had any Piglet merchandise. I was told that he was “just a minor character,” so there wasn’t much stuff just for Piglet. Since then, it’s left an appreciation in my mind for so-called “minor” or secondary characters, and the Sherlock Holmes canon is filled with personalities that give the stories and their adaptations a more complete universe at Baker Street and beyond.