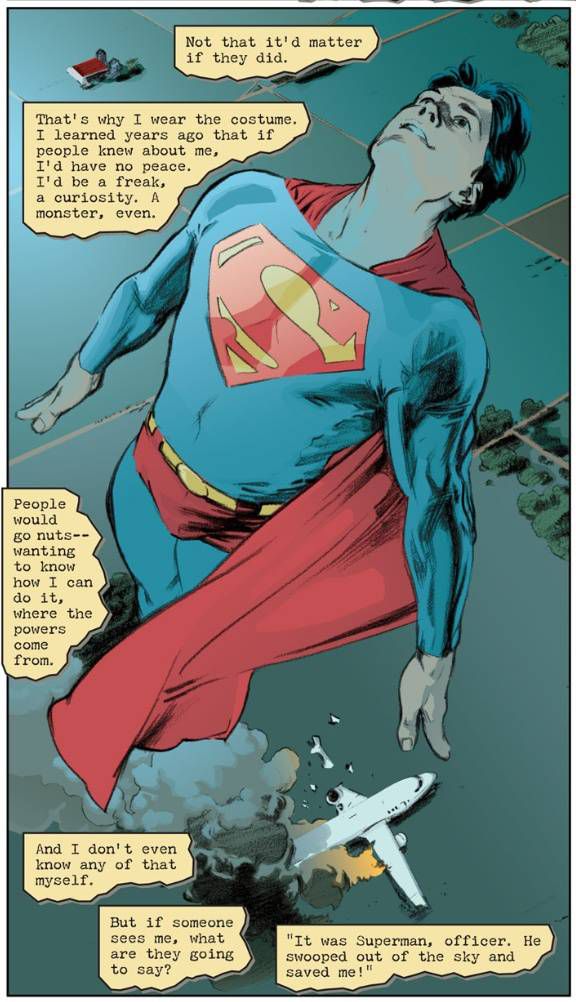 I didn’t always care for Superman. I mean, I wasn’t one of those people who decried his every appearance and busted people’s chops for a being a fan of the guy. It was more a value neutral thing. He was just there on the outskirts of the comics I was reading. Superman just wasn’t for me.

I don’t know if it was providence or just pure dumb luck, but when I was 19 I was stopped dead in my tracks while going through a bin of used comics. By this…

Straight up mesmerized. Just look it it. It’s so clean. So simple. So effective. I can’t really explain it, but it looked like the future to me. I had to have them. It’s all Stuart Immonen’s fault.

Secret Identity tells the story of a young man named Clark Kent. No, not that one. He’s just a normal nobody from Kansas whose parents have a terrible sense of humor. He’s drowning in Superman themed presents and Superman themed insults from the contractually obligated school bully. Then one day, he flies. He flies and then everything changes.

It’s the simplest What If Story in the world, but Busiek and Immonen make magic with it. There’s so much vulnerability and wonder, two things that I’ve come to see as the core of truly great Superman stories. Readers are guided through the majority of Clark’s life. We watch him grow old and wise. We watch him deal with fear and with hope. We watch his life take shape and the world react to him just trying to exist.

Recently, there’s been a bit of a glut of first person narration in super hero comics. A majority of the storytelling in Secret Identity is done through Clark’s journal. The creative team does it right. This is a thoughtful, personal story. It lingers then will lurch years into the future. Busiek’s prose never stands in the way of Immonen’s art. The words don’t just sit there limp, reiterating what readers can plainly see on the page. They get out of the way and let Immonen’s work sing.

And wow, does he ever. Immonen is a stylistic chameleon. His art has shifted so dramatically

over the years that you could probably line up a half dozen titles he’s worked on and most people would never guess the same person had produced them. Here, Immonen’s line is subtle and sure. It’s simple and clean, much like the cover design and trade dress, but it’s weighty with shadows and shading. He’s not quite doing the bombastic slightly exaggerated cartooning that he’s throwing down in the X-books these days. Less is more. He’ll flip from tight shots of faces during quiet moments and then pull back to a mountain vista or Clark floating in the void, watching the world and wondering what it will bring next. It’s breathtaking work.

His colors are muted and dark. Lots of greens, blacks, and burnt oranges. It’d be so easy for a book with this color palette to look muddy and depressing. Somehow, Immonen saves it and makes the possibly silly looking primary colored Superman suit that Clark dons look even more important and vital to his development.

It’s one of the few “real” looking books that actually manages to feel like it takes place in the real world. The rhythm of the narration, hand in hand with the artists eye for composition and color drives home the feeling of isolation that comes not just from having a secret, but from just being a nobody. It’s an awfully lonely book until Clark is able to let go, grow up and allow other people into his life.

Critics will say that Superman is a boring character because he lacks emotion/is too powerful/too good of a person. Whatever the flavor of the week is. Secret Identity proves all of these wrong. It’s a clever book bursting with heart anchored by beautiful, subtle art that creates a fully realized person and follows them through his entire life.

Yeah, he’s not the actual Superman, but he’s still Clark Kent, whether he wanted the name or not.