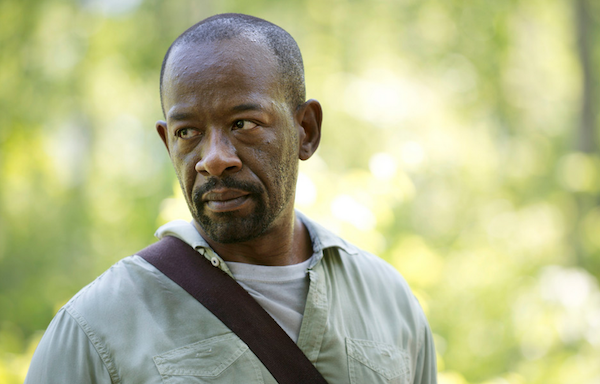 Before diving into the recap I expect some of you are wondering why there weren’t recaps of Fear The Walking Dead. For one, I was pretty busy getting married when the show premiered, so it was decidedly lower priority for me. And furthermore, the spin-off show isn’t based on a comic, so it didn’t seem as appropriate on this site. I did end up watching it and am happy to discuss it in the comments, because it’s kind of hard to have spoilers from a prequel in my opinion. Now onto season 6!

Per usual we have to recap the recap. In season 5 the gang discovers Alexandria, a walled community of people who get along better with Gabrielle than the rest of Rick and his crew. One of them even tries to kill Glen in the woods, not cool. We’re also reminded that Morgan believes all life is precious, which puts him somewhat at odds with the Rick he finds executing murderer/spousal abuser Pete inside the walls of supposedly safe and civilized Alexandria.

Tara is in the clinic and looks to be fine. Sad to say I can’t even remember why she was there. Glen arrives with his would-be murderer, Nicholas, and makes up a lie for Maggie (now with LONG HAIR) about how it was all just an accident even though it was attempted murder. Teenage romances continue to be boring even in the apocalypse.

Morgan is now Donatello, with a mysterious origin to his new bo-staff skill. It’s handled a bit clunkily but I’m happy to have him spinning sticks next to Michonne’s Leonardo. I guess this makes Rick Rafael?

Heath et al. show up while Eugene is on guard duty. The groups haven’t met before but Heath charismatics his way past Eugene’s awkwardness. I will say the show continues to do an amazing job with casting. The actor playing heath both looks exactly like Heath in the comics but imbues enough charisma that he is immediately more memorable than Heath in the comics. Well done. Also, Eugene “respects the hair game.” because of course he does.

Burial rights within Alexandria are debated. Reg gets a plot, but his killer not so much. Pete’s son Ron continues to watch and develop teenage angst. Morgan points out that Alexandria has a cell that could be used, everyone is a killer now, execution maybe not the most just punishment for such a universal crime. Even still, Morgan insists on digging Pete a grave outside the walls, because Morgan is who we wish we could all be in this scenario: decent and calm.

Rick and Morgan discover the quarry just in time for Ron to lead a small group of walkers towards them. In probably the best action sequence of the episode the duo save Ron while sending the walkers off the precipice. Good stuff.

I’m basically going to skip the storyline where Rick tries to mentor the teen whose dad he just killed. Nobody wants this storyline, including the kid’s mother.

Heath has known about the quarry since early on, but never brought it up or thought it worth dealing with. He reveals this at a town meeting, Rick wants to deal with it directly, some other guy, Carter, would rather be defensive, and Carol continues to play the “aw gee shucks” role. Not sure what her endgame is at this point, but I kind of dig it. Glen keeps Maggie with Dianna, even though she knows it’s just a ploy to keep her safe, which she admits. I’m guessing this is a hint at a larger reveal from the comics, but I won’t say more than that. Gabrielle wants to help but Rick smartly says “no” because Gabrielle is useless. Architect boy Carter doesn’t trust Rick because drama reasons. This scene continues to emphasize why I love the casting on this show, so many different kinds of people and faces.

Rick forces Carter’s hand to help with the hoard relocation effort. He is very much skeptical. Rick also continues his flirtations with Pete’s widow, Pete being the man he literally just shot in the face in front of her. Not a great plan, Rick.

Abraham is still worried that Sasha is suicidal, she claims she is not. Nothing that happens in the episode confirms or denies this, even as Abraham performs some sanity-questioning maneuvers.

In my favorite scene of the episode, a food-stealing Eugene overhears a group of Alexandrians, including Carter, planning a Rick overthrow. Eugene is caught but rescued by Rick and others. Rick doesn’t even pretend to be intimidated by Carter’s gun, especially with Daryl and Morgan as backup. It’s a scary moment for Rick that serves to really put the two groups in perspective.

Fade in on Rick speechifying in front of a quarry full of walkers being held at bay by carefully parked semi trucks. In the midst of planning something one of the trucks topples into the quarry. The game is on even though this was totally not the plan! I have to say that Bear McCreary does an excellent job with the music in these segments. I recently listened to an episode of 99% Invisible that was all about horror music and he’s hitting all the right beats while still doing something a bit original. Feels more like a thriller than a horror movie at times which is perfect.

Whilst worrying about their zombie-hoarding fortifications Morgan questions Michonne about a missing peanut butter bar from way back in the show, which is a great moment of levity but hard to say if Morgan is purposefully lightening the mood or just that unaware.

Glen’s storyline for this episode involves dealing with a building full of about a dozen walkers with Heath and Nicholas. The whole point of it seems to be to show just how much better the former pizza delivery boy is at dealing with the world as it is now than anyone else not from their group.

It does serve to emphasize just how bad everyone not from Rick’s group is at dealing with walkers. Just so incompetent. This is reflected in the B&W storyline where the Alexandria group cannot handle the most tepid of walker attacks that the Rick et al. group dispatches like it’s a chore.

I’m now realizing that the color storyline is mostly just luring the hoard in certain directions. Not as much to write about. The zombie effects still look good and continue to evolve. I’m not sure why zombies were dying against the wall, this isn’t Cincinnati. At least Carter comes around to Rick’s way of seeing things just in time to get bit in the face and scream so loud that Rick has no choice but to stab him in the now-bitten face. Makes sense.

Show ends with us seeing the B&W world meeting the color. Sort of. There’s an air horn blasting somewhere near Alexandria that draws the controlled hoard off course back towards town. What’s going on? We don’t know, at least not until next week.

If this episode is to be taken at face value, the main conflict this season is going to be between the unprepared Alexandrians and the win-at-all-costs Team Rick. I think this is a feint, judging from the hints of the wolves in the season 5 recap. Time will tell which path the show takes.