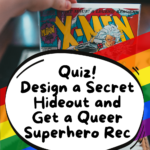 Queer superheroes are still relatively new. However, after decades of slow but steady progress, there are now enough of them that both Marvel and DC are commemorating Pride Month 2021 with special anthologies featuring their LGBTQ+ characters.

These collections are a long time coming. It wasn’t until the early ’90s that both companies introduced openly gay heroes: DC’s Pied Piper had a very laid-back coming out in Flash #53, while Marvel’s Northstar made a far more bombastic announcement in Alpha Flight #106. By the mid-2000s, gay characters started getting their own titles: Marvel released the controversial Rawhide Kid: Slap Leather miniseries in 2003, and DC revamped Batwoman into a lesbian icon in 2006. Today, there is still much progress to be made (the LGB has received far more representation than the T, for instance). However, queer heroes and anti-heroes have become an integral part of both the DC and Marvel universes. For one brief, shining moment, Marvel even had a team — the Young Avengers — composed entirely of queer heroes!

In celebration of Marvel and DC’s anthologies, I’m going to point you towards some comics starring characters who are anything but straight. To determine which book you might like best, you first have to design something that no superhero is complete without: a secret hideout! The information gleaned from the following ten questions will tell you which queer superhero is your perfect match.