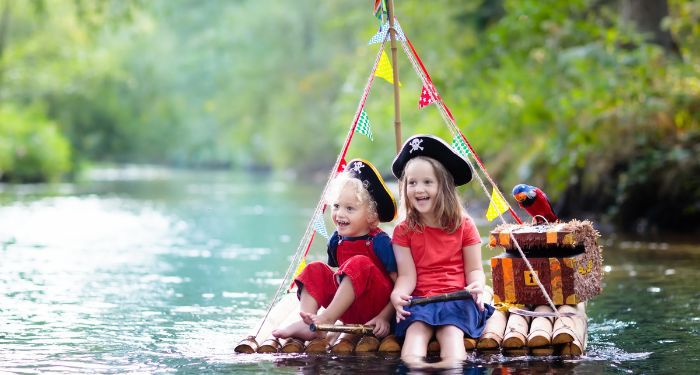 Picture books about pirates are very popular around these parts. No surprise that a favorite joke in this household is the classic: “What is a pirate’s favorite letter?” Yup, even if you don’t know the joke you can probably guess: “Rrrrrrrr!” Funnily enough, that still makes me chuckle even though I’ve heard it too many times to count.

Perhaps it varies from reader to reader, but pirates and pirate-inspired adventures do seem to remain popular among children’s book fans. I assume it is the heady freedom and the playfulness that naturally seems to accompany the topic. Or maybe it’s just the clothes and the gear, who knows, but pirates do seem to be a time-tested topic for kids to read about. So then, which titles could you and your little pirates-in-training enjoy most?

If you’re a Neil Gaiman fan, you may already know about his Pirate Stew. And as I was searching for other titles, I came across a busy book for toddlers called Narwhals and Pirates, that I just basically wanted for myself, and also a fun looking graphic novel called Pirate Penguin vs Ninja Chicken by Ray Friesen, which I feel I would really enjoy (dropping subtle hints for any gift-givers in my life).

However, there are a lot of other titles out there if you’re particularly interested in picture books to explore. Below are some of what I have stumbled across recently and I hope you find some of these as charming as I have. 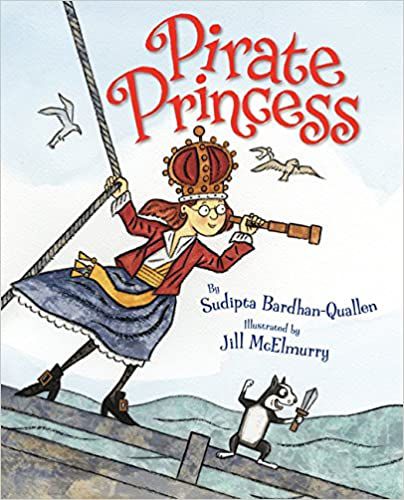 Pirate Princess by Sudipta Bardhan-Quallen and illustrated by Jill McElmurry

This is a rhyming story about a girl, Bea, who isn’t a “regular” princess. Looking for adventure, she decides to join a pirate ship, but she finds it pretty difficult to ingratiate herself with the crew, despite her best efforts (which include some terrible cooking and some, erm, even more disgusting seasickness which McElmurry vividly renders across two pages). While I am personally averse to seeing any evidence of queasiness, that aforementioned spread would probably be funny to other readers of a certain age and disposition. 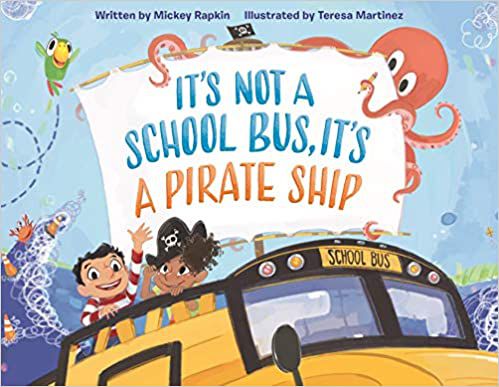 It’s Not a School Bus, It’s a Pirate Ship by Mickey Rapkin and illustrated by Teresa Martinez

I enjoyed this book quite a bit, probably since I rode a school bus a lot as a child and dreaded it, for the most part. I feel like Martinez’s illustrations perfectly capture the scariness of climbing onto a school bus full of rowdy children. Luckily, the bus driver tells her new charge not to worry, “this bus is a pirate ship!” and so they set off on an adventure together. If you like this, you might also try Rapkin’s and Martinez’s It’s Not a Bed, It’s a Time Machine. 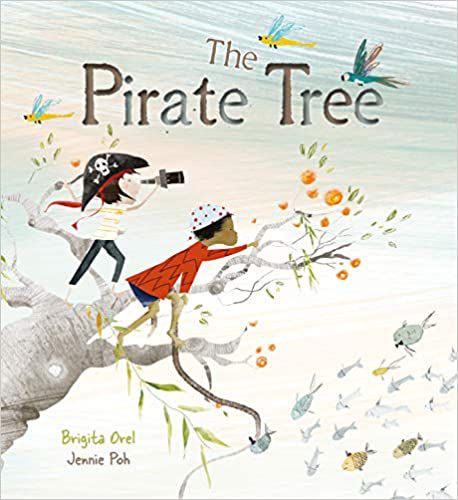 The Pirate Tree by Brigita Orel and illustrated by Jennie Poh

This features a duo, Sam and Agu, who end up imagining a pirate adventure together. At first, Sam is wary since she says that Agu isn’t someone she knows and isn’t “from her street.” Apparently, Agu has just arrived in the area and the other kids aren’t including him in their play. Fortunately for them both, Agu isn’t completely discouraged by Sam’s unfriendliness and persists. Eventually, he convinces her to include him since he knows something about ships and the pair fast become friends. 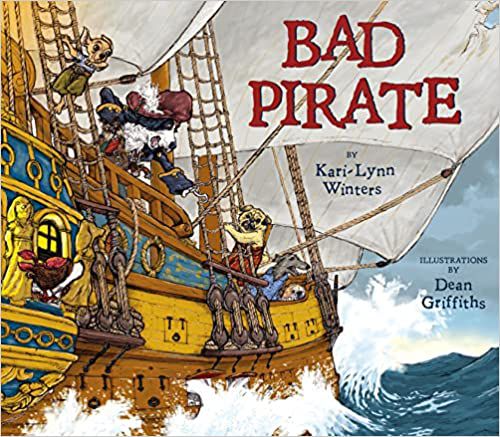 Bad Pirate by Kari-Lynn Winters and illustrated by Dean Griffiths

This is a comforting pirate read with dogs as the heroes and villains. For some this will especially appeal as you will be able to use your Pirate language skills to read this aloud to yourself and others (or just yourself because, seriously, no judgment here, you should do whatever you enjoy). If you like this, also check out Good Pirate by the same author and illustrator. 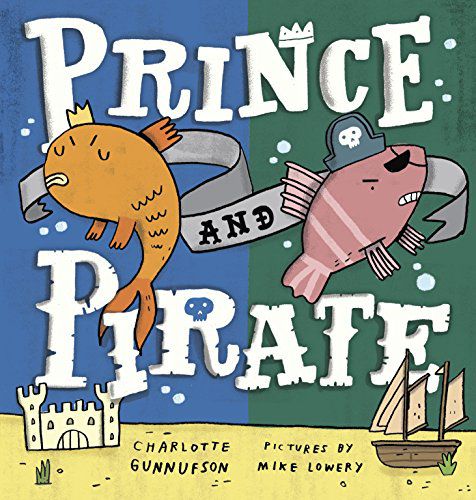 Prince and Pirate by Charlotte Gunnufson and illustrated by Mike Lowery

A funny story about an odd couple who end up literally thrown together. I feel like quarreling siblings might see themselves in this book and somehow find common ground, but I guess that might be a bit too much for the kiddos. However, if you are around squabbling little ones, you might particularly enjoy the main characters’ ridiculous snipes. At turns sweet and silly, I really enjoyed these two characters and would be happy to see more of them in the future. 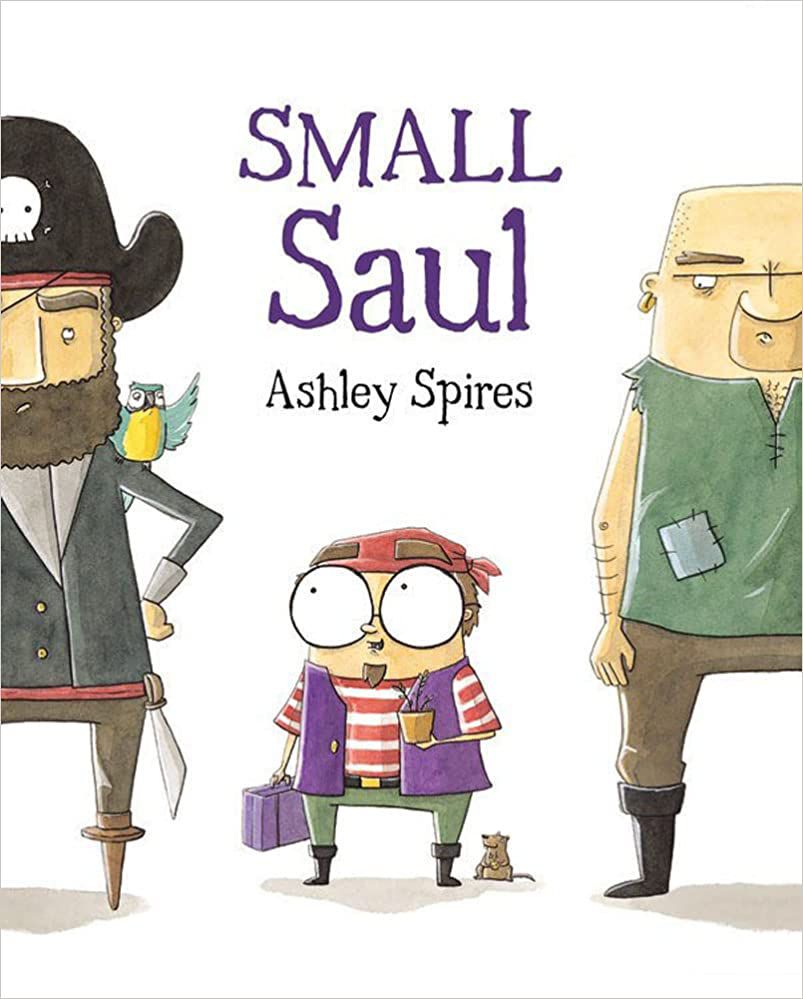 Saul dreams of a life on the sea and eventually signs up for pirate school (no, that’s not a thing, but maybe it should be?). And he’s not really cut out for it but with some persistence he graduates. Charming and funny illustrations pair well with this story about being yourself. I especially liked that his hard won diploma reads “You ARRR a Pirate” (see the excellent joke above in case you missed it). 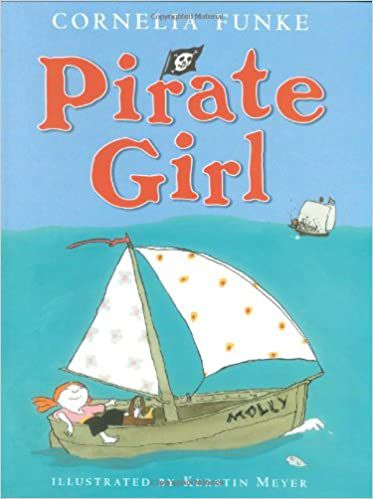 This was originally written in German, in case you’re interested in adding some translated children’s books to your collection. Be aware that it is a little more text heavy than some might expect in English children’s picture books of a similar ilk.

This is the story of Molly, a little girl whose boat is captured by Captain Firebeard and his crew. At first forced to peel potatoes and clean up after everyone, Molly gets her revenge after her mother follows Molly’s secretly communicated messages and confronts her captors. If you like this, Funke has also written The Pirate Pig chapter book. To add to that, I also have had Funke’s Inkheart on my TBR for ages, but as far as I know, there are no pirates in that one. I just mention it since it looks good too! 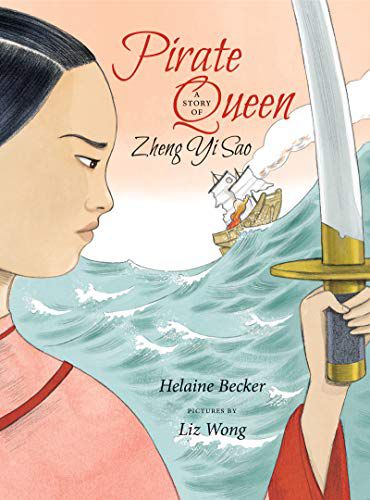 Pirate Queen: A Story of Zheng Yi Sao by Helaine Becker and illustrated by Liz Wong

This book is a solid addition to the list in a number of ways: strong female lead, complex and imaginative story based on some historical fact, and visually interesting illustrations. However, bear in mind that it is direct about difficult topics like the abduction of women, suicide, and death. I enjoyed the author’s note at the end in which she explains briefly what is known and unknown about the woman who became Zheng Yi’s wife and a very successful pirate queen in the early 1800s. Recommended for older readers who will be able to handle some of the more difficult aspects of the story. Highly recommended for adult readers too. 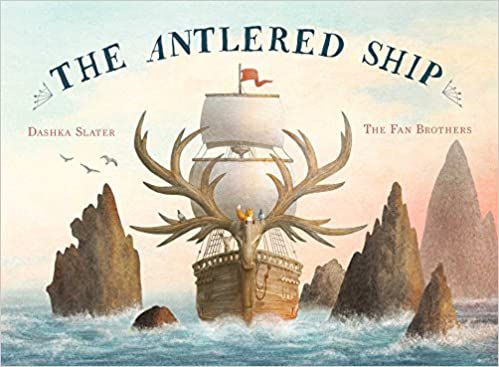 And here is one more “bonus” title to add to this list, a book in which pirates make an appearance! This is a lovely, contemplative story about a group of animals who set sail for the open sea. Along the way, they meet a pirate ship (crewed by other anthropomorphic animals) and have to defend themselves. Will this small animal gang make it out of this scrape? And if they do, what will they do after? I enjoyed both the story and the beautiful illustrations in this one. Now that I’ve seen what the Fan Brothers can do, I clearly also need a copy of The Night Gardener. No pirates in that one, just very impressive illustrations.

That is my list for now, mateys. I can’t believe I’ve made it this far without adding in some fake Pirate speak. That is obviously a missed opportunity I should rectify the next time I’m writing about pirate books. Anyway, I’ll have to look for more pirate adventures to share as this has been such a pleasant topic to revisit just for my own enjoyment.

In the meantime, if you’re looking for titles for older readers, check out these YA books for pirates for yourself or others. If you like those, also check out this quiz to figure out your next YA pirate book.