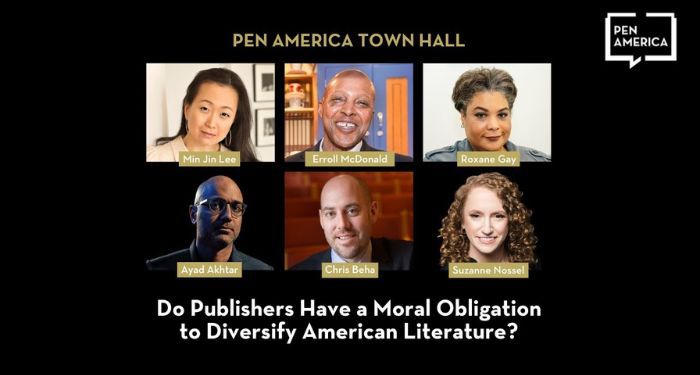 PEN America President and author Ayad Akhtar opened, discussing the events held in the organization’s centenary year and its renewed mission to what PEN stands for in light of increasing censorship efforts.

“In this hundredth year we have also found our mission reborn and our fight for free expression as vital and essential as ever [. . .] as state legislatures and school boards work to ban books and place gag orders on education, we have become watchdogs tracking the growing censorship in America today,” he said.

Akhtar also noted in his opening remarks that PEN has “sounded the alarm and will continue to sound the alarm about the lack of diversity in publishing,” setting the stage for the evening’s panel. At the heart of the event rests PEN America’s new report Reading Between the Lines: Race, Equity, and Book Publishing, published in October 2022. The report examines the current lack of diversity both within the ranks of publishing professionals and the books put out by the publishing industry.

In some of her earliest remarks, Roxane Gay stated, “I think that ultimately the question that we’re asking, does publishing have a moral obligation, it’s not even the right question because it’s a business and businesses don’t have morals. They can’t because they’re not people. The real question is why are we still having these conversations, asking should when we know that they should and instead we should be asking how do we diversify.” She pointed to the report’s many solutions to change the status quo arguing that the pressure must be put on the industry to make the changes.

Economic imperative was brought up in various ways over the course of the event with the panel discussing the power of readers and booksellers to push publishers. Nossel asked the panel “Where really is the point of leverage in this system?” Writer and editor Chris Beha offered that the points of leverage were manifold across the industry and needed to be applied from many sides. Erroll McDonald argued that publishers need to start incentivizing its publicity, marketing, and sales departments to advance the cause of diversity in books. He adds, “Publishers need to start investing in an infrastructure that advances this. Publishers need to do what they said they were going to do after the murder of George Floyd and they have failed miserably.

Author Min Jin Lee shared her own experiences as an outsider in the industry, “When I tell my stories about publishing, I’m telling you what it’s like to be on the outside . . . and I’m out here trying to explain myself because I don’t trust that anybody else is going to explain me. And I think that is the burden of being an outside writer.” She went on to say that “[the] burden of trying to be exceptional is so, so unfair.”

The panel went on to answer questions from the audience ranging from intellectual capital and power, how reading habits are changing, and developing readers. Near the end of the event in response to a question, Lee described the immense value of soft power, arguing that it is just as potent as financial or political power. She wondered if the publishing industry would be truly willing to give away that power if, “Let’s say all of us somehow change the world and find all these readers and we can prove that there is a market for this incredible work that we do as people of color and also as outsiders.”

She finished, asking, “Would they give that power away? I don’t know.”