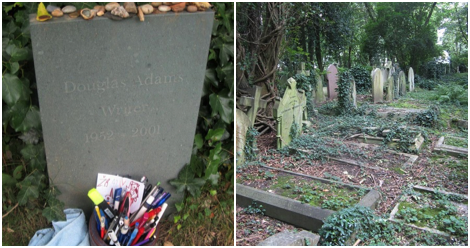 We opened the gate into a world of stone and plants. Highgate Cemetery was unlike any cemetery I had been to at that time. The cemetery, which opened in 1839, fell into disrepair in the 1970s because it wasn’t profitable anymore. Nature then took over.

Wandering around, we found nature’s green gnarled hand all over the cemetery. Tombs had trees growing out of the middle of them; the sleeping body below transformed into new life. Vines snarled tombstones or emerged from the broken remains. We had a brief insight into what the Earth will be like once humans are gone. 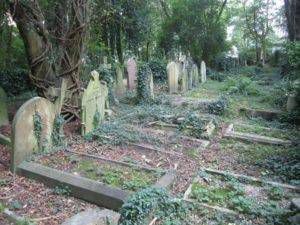 It seemed appropriate that Douglas Adams would be buried here. It seemed like his kind of absurd.  His grave was well-kept considering the rest of the cemetery. It was a simple tombstone with his name, his occupation as “Writer” and his dates. There was a blue towel (!), a jar of pens, and a variety of stones on top of the tomb. 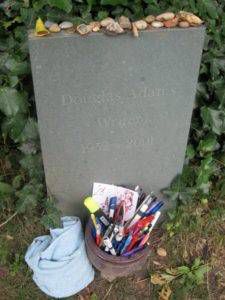 I hadn’t expected to find the tomb there. I would have brought a towel if I had known. But neither of us knew he was there. I needed to do something.

His work was pivotal in my life. I remember encountering Adams’ work for the first time as a text based computer game for Hitchhiker’s Guide to the Galaxy. When trying to play this obscenely difficulty game, I had my first taste of the wonderfully absurd world of Adams. Years later, I finally read the five book trilogy, reveling in this profoundly unfair and bizarre world of Hitchhikers. Also, I grew to love his insane style of writing: “The ships hung in the sky in much the same way that bricks don’t.” This writing wasn’t something I had encountered elsewhere. Or the idea of five book trilogy.

My friends and I tried to start a cult to Marvin, a cross between Marvin the Paranoid Android and Marvin the Martian, on our lunchbreak in middle school. Mostly it was an excuse to “sacrifice” the boys we liked. But I think it would have been in the spirit that Adams would have appreciated.  Later in high school, I wrote “Don’t Panic” on top of quizzes and tests where I needed the encouragement. That green alien of the Guide brought me a touch of comfort in the darkest of places.

The humor still resonates with me. I think my twisted humor about animals and food comes from Douglas Adams. I like to acknowledge that my meat was formerly mooing or quacking. Or better yet, my favorite meal in Shanghai was when I just had a paper menu with pictures of animals on it. I simply pointed to what I wanted and that was dinner. Meat was the common language. I have to believe that awareness/dark humor comes from the eager cows at the Restaurant at the End of the Universe.

And later in life, I would take the Twitter handle @vogontroubadour. Because Vogon poetry.

I also love how Adams could be so compassionate about the world around us. I found out that he had traveled with Mark Carwardine, a biologist, to seek out endangered animals throughout the world, like the Yangtze dolphin and the kakapo. That journey became the brilliant, melancholy work Last Chance to See. (Later Stephen Fry and Carwardine would go back to the animals and see how they fared years later. Bittersweet). His love of the kakapo, a New Zealand parrot, that was sign of nature’s sense of humor. This flightless bird, that occasionally forgot that it couldn’t fly, was in danger of complete extinction. He encouraged people to contribute and help this strange little creature become fruitful once again. The kakapoo’s numbers are slowly on the rise but it takes a lot of careful conservation.

And 42 is always the meaning to life, the universe, and everything.

So when I came across this tomb, I knew that I had to leave some small tribute.  Too bad I didn’t have analgesic or a piece of towel.  All I really had was a coin in my purse. Sure, it wasn’t directly tied to any of his oeuvre but it was what I had. It was kinda silly but I think Adams would have appreciated it for that.