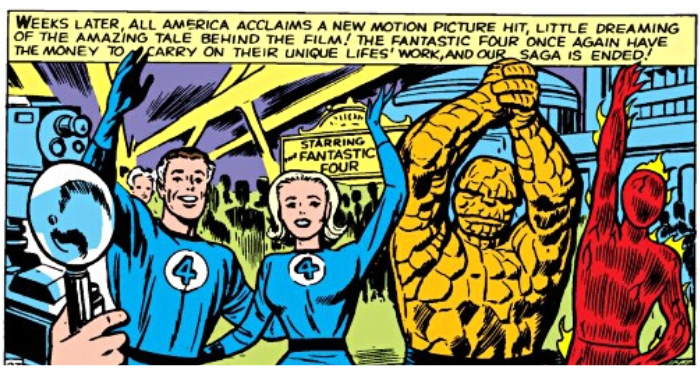 Among Marvel’s many hundreds of characters, the Fantastic Four are a bit infamous for their apparent inability to make a good movie. The 2005 Fantastic Four and its 2007 sequel, Fantastic Four: Rise of the Silver Surfer, were widely panned, as was 2015’s Fantastic Four (or Fant4stic, if you will, though I wish you wouldn’t). 1994’s The Fantastic Four was never even released. The only thing this franchise seems to be able to get right is its casting of blazing hot (zing!) Johnny Storms. This is particularly sad when you consider that the FF were the start of what we now know as the Marvel comics universe and yet they still can’t seem to get it together on film, while characters like Groot of all people are household names.

However. Way back in 1962, a Fantastic Four movie was made that, by all appearances, is amazing. Tragically, we can’t see it, because it was made within the Marvel universe, in an issue of the comic. But let’s take a look at the filming of this masterpiece and see if we can’t live vicariously through Marvel’s moviegoing public.

The story unfolds in Fantastic Four #9, by Stan Lee and Jack Kirby. The cover alone is truly a thing of goofy Silver Age beauty. Lee and Kirby are often credited with popularizing three dimensional, flawed heroes with down-to-Earth problems like financial woes, but I think you’d be hard-pressed to find a reader who can relate to this particular scenario.

We open with Namor the Sub-Mariner watching an underwater TV while sitting in a clamshell chair, which is worth the price of admission already. Namor had already clashed with the FF twice despite this only being issue #9, so he’s pretty pleased to hear that they’ve gone bankrupt, and also smells an opportunity.

We cut to the FF, where it turns out that Reed lost all their money playing the stock market — great job, smartest man on Earth! — and is now forced to sell off their equipment. The rest of the team offers to help, with Johnny declaring that “There must be some way I can cash in on this fiery body of mine!” (not until you’re 18, Johnny), but Reed refuses to allow them to rent themselves out as “freaks” or commit crime, which are apparently the only options? I don’t know, I feel like Ben could make bank on completely legal demolition jobs.

But then a miracle happens: they receive a telegram (a telegram!) from S. M. Studios in Hollywood offering them a million dollars in cash to star in a movie. Neither the specification of cash nor the fact that they’ve never heard of S. M. Studios raise any red flags for the team, so it’s off to Hollywood!

The FF arrives in Hollywood, where they tragically only have a little over a page to gawk at the stars (including Bob Hope and Dean Martin, which I guess makes this a crossover with DC). They are ushered into the head office of S.M. Studios, where they meet the producer…

…Namor! With a cravat and a cigarette lighter because that’s how producers dress, I guess! I can’t stop laughing. Please give this issue a hundred belated Eisner Awards.

Namor explains that he’s loaded with sunken treasure, so out of idle playboy boredom, he founded S.M. Studios (Sub-Mariner Studios, get it???) and decided to make a movie about the Fantastic Four for *mumblemumble* reasons. Ben’s suspicious, but the money’s green, so they agree without asking to see a script or even what the movie’s about.

Spoiler: This is a Mistake.

When filming begins, Namor takes Reed out to “Hidden Isle.” Reed asks again about a script, but Namor tells him not to worry about it, just improvise fighting the robot cyclops the studio has placed on the island.

But it’s a trap! The cyclops is real! Who could have predicted this??? Of course, Reed is still Mister Fantastic, and he handily defeats the cyclops, but Namor has already departed to spring his next trap.

I have so many questions about the crew following him around. They’re not his subjects because they aren’t blue like other Atlanteans, so are they a real film crew? Surely there must be some real movies being made on this lot, or John Wayne and Alfred Hitchcock wouldn’t be hanging out there. In that case, aren’t any of the crew wondering why the boss keeps luring his stars into dangerous stunts and immediately leaving while cackling? Or is that just sort of par for the course in Hollywood?

[Note: Johnny’s trap involves African “natives” and the entire sequence is extremely racist so we’re going to skip it entirely. Also, take all those Eisners I handed out before away. Ugh.]

To cap off his scheme, Namor takes Ben to the beach and tells him they’re going to improvise a fight scene, then just starts whaling (get it?) on him. Ben manages to gain the upper hand by dragging Namor away from the water that is the source of his strength, until he is RANDOMLY STRUCK BY LIGHTNING and turns human again (???), allowing Namor to easily knock him out. Things just sort of happen in this comic, don’t they?

Namor returns to S.M. Studios where Sue has been sitting around unquestioningly because Stan Lee was allergic to writing women with functioning brains. He announces his triumph AND THEN PROPOSES. Sue, astonishingly, tells the man who just claimed to have killed her brother that she would have considered his proposal if he’d been honest about his intentions, but now…! Apparently murdering all of Sue’s loved ones is fine, but lying is naughty.

The ensuing fight is sublimely ridiculous. Sue turns invisible and throws a lot of books at Namor. Namor summons the power of an electric eel, which is of course effective because eels can’t read. Sue throws a carpet over Namor — his one weakness! — but he turns his eyes into cave fish eyes to spot her via radar. Namor’s powers are weird.

Sue is struggling in Namor’s clutches, which would be more upsetting if we hadn’t just seen how cartoonishly ineffective Namor’s nefarious schemes are, when the rest of the FF bursts through the door, alive and well and hopping mad. (The lightning strike that turned Ben human has worn off, like lightning does.) Sue tells them they can’t fight Namor — who is currently attempting to abduct her against her will — because three against one isn’t fair. The logic of this story is utterly bananapants and I’m in love with it.

To give Sue credit, she then resolves the whole issue by pointing out that the FF upheld their end of the bargain. Namor glumly agrees that the movie will be made, gives them a million dollars, and Charlie Brown–trudges into the sea.

And then somehow the movie gets made??? Out of like 20 minutes of live action footage of not even the entire FF fighting random enemies, including the owner of the studio??? Someone please hold a seance and ask Stan and Jack what the heck this movie is about, I am dying to know. But it couldn’t be any worse than Rise of the Silver Surfer.

Anyway, all’s well that ends well and the FF enjoy a glamorous Hollywood premiere, only to have all of this never mentioned again. Truly, a story for the ages. Hey, maybe the next Fantastic Four movie should just be an adaptation of this! I’d see it, wouldn’t you?