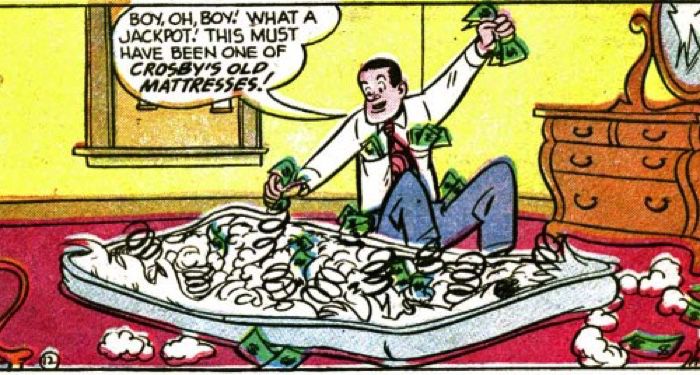 If you read any Silver Age DC comics, you will eventually come across something bizarre: house ads for comics starring real people like Bob Hope, Jerry Lewis, and Dean Martin. I’ve read a lot of Silver Age DC, and I always wondered about this quirky little aspect of their publishing line, so I decided to do a deeper dive into celebrity comics in general, and those of the 1950s in particular.

Celebrity comics have existed basically as long as comics in general have, it turns out. As early as 1898, there was Dan Leno’s Comic Journal, a black-and-white periodical about the British music hall star Dan Leno, who also wrote much of it. Subsequent decades brought countless others, from Charlie Chaplin’s Comic Capers, a newspaper strip that ran in the 1910s and was for a time drawn by the creator of Popeye, to the currently-running Bettie Page, a monthly series from Dynamite where the late pinup model apparently fights aliens (?!).

Here in the U.S., celebrity comics — by which I mean ongoing, licensed series about a living famous person, not written or drawn by said person — reached their peak in the 1950s. This makes sense when you consider the historical context of the comic book industry at the time. Superheroes had fallen out of favor in the late ’40s and hadn’t yet experienced their early ’60s renaissance, meaning that other genres had a chance to shine. And the Comics Code Authority was at the height of its power, pushing out the previously popular crime and horror comics and severely curtailing others that relied on violence, like adventure and war comics.

A celebrity comic, on the other hand, is going to be pretty tame by its very nature, because it has to be approved by the celebrity (or their team), and because the celebrity wouldn’t have become popular enough to star in a comic in the 1950s if they weren’t already considered wholesome enough to pass muster with the Hayes Code. And thus: the 1950s celebrity comic.

Surprising no one, this meant a lot of cowboys. Dell Comics was the undisputed champ here, publishing long-running series about both Roy Rogers and Gene Autry; entertainingly, both series were eventually renamed to include the cowboys’ famous horses as costars (Trigger and Champion, respectively), plus the horses got their own comics! With, uh, limited success. Apparently when you ban sex, violence, diversity, vampires, and independent thought, you end up really scraping the bottom of the barrel for subject matter. Either that or someone at Dell really liked horses. John Wayne also starred in his own comic for a bit, published by “Toby Press,” who I have literally never heard of. (And all this is just in the U.S.! There were plenty of long-running UK comics about American western actors, which is its own fascinating little oddity.)

Both of these comedy series ran for an astonishingly long time: Bob Hope for 109 issues from 1950 to 1968, and Jerry Lewis for 124 issues from 1952 to 1972. This is mind-boggling, both because nowadays it seems like no one but Batman can hold down more than six issues at a stretch, and because the world of pop culture changed so drastically from the early ’50s to the late ’60s. I can’t imagine a celebrity retaining that kind of popularity for 20 years today. (And, well, Hope and Lewis didn’t really, as we’ll see.) It’s also strange because Hope, Martin, and Lewis were all singers as well as comedians, which…isn’t really an art form that translates well to comics.

The early comics are more straightforward. Basically, if you’ve ever seen a Bob Hope or Martin and Lewis comedy, it’s that, but drawings. In Bob Hope #1, for example, our hero invents a new golf club, accidentally enters a ski contest despite being afraid of heights, and tries to avoid his landlady because his rent’s overdue; in Martin and Lewis #1, our heroes get fired from their jobs at a bakery, only to discover that Lewis is the perfect size and shape to pilot a one-man rocket to the moon, which Martin proceeds to bully him into doing for the sake of the $100 salary. There’s no explicit acknowledgement of any of these actors’ real-life careers — that is, these comics aren’t about the actors Bob Hope, Dean Martin, and Jerry Lewis, but about the sorts of characters they played in their movies, who just happen to be called Bob Hope, Dean Martin, and Jerry Lewis in these comics. (Though there are winking references to their real, celebrity lives, e.g. jokes about Hope’s frequent costar Bing Crosby.)

So are they funny? I mean…I guess so, in a mild kind of way? The thing is, I can see how these gags would translate to film, because they’re trying so hard to emulate the movies, and a good comedian could probably sell it. I could see myself laughing if these were movies. (Well, Bob Hope. Jerry Lewis’s humor has…perhaps not aged very well.) But as comics? They’re just sort of okay.

However. By the mid ’60s, the comic book industry had changed drastically, and the popularity of these actors had long past peaked. In response, both books added new characters, and they were bizarre. Over in Bob Hope, issue #95 introduced Hope’s honorary nephew, Tadwallader Jutefruce, a buttoned-up nerd — but when he gets angry, he becomes the mop-topped, guitar-playing Super-Hip, who can fly and shapeshift. Also the faculty of his high school consists of Universal movie monsters like Dracula and Frankenstein. Also Bob Hope got a talking dog somewhere in there, because why not I guess.

Jerry Lewis also gave its hero a nephew with issue #85, although instead of a “cool” teen superhero, Renfrew is a pint-sized terror who wreaks havoc on his uncle’s life. To cope, Lewis hires a witch named Witch Kraft, complete with pointy hat and cauldron, as his new housekeeper. The Universal movie monsters show up here too for some reason. It’s less weird than the Bob Hope stuff, but only marginally. Of course, it’s hard to top “Hey kids! This comic is about actual real life 62-year-old comedian Bob Hope and his shapeshifting superhero nephew and his talking dog and Dracula!” for weirdness.

I find the early iteration of these comics fascinating in sort of an abstract sense, because the idea of making a long-running comic ostensibly about a famous person, but they’re not famous in the comic, is so strange to me. But the later comics are fascinating to actually read and not just in concept, if only because the flop sweat is so very visible. You can smell how desperate DC was to somehow appeal to young people with these books by chucking in ever-weirder elements, while the entire existence of Super-Hip also radiates contempt for teenagers. It’s extremely entertaining.

As I said at the start, the world of celebrity comics is far more vast than the strange little Hope and Lewis universe — we haven’t even talked about what’s probably the most famous celebrity comic of all time, Superman vs. Muhammed Ali — but I enjoyed wandering down this rabbit hole and discovering that yes, these comics were both as boring and as weird as I expected them to be from the house ads. Are they worth reading today? Eh, probably not. But if DC wants to dust off Super-Hip for a new comic, I would absolutely read it. Especially if they include the talking dog.