I’m not bugged too much that computers are better than me at playing chess. Or at playing checkers. Or even at suggesting nearby pizza with clear driving directions (people stopped asking me long ago, anyway *sigh*). But now computers are also cranking out novels for National Novel Writing Month, too?! Ah, beans!

Since 2013, coders have been celebrating NaNoGenMo, or National Novel Generation Month. Just like NaNoWriMo, the goal is to have at the end of the month an original 50k word novel. Unlike NaNoWriMo, the novel is actually “written” by a computer program.

Sure, the generated novels tend to be just two notches above complete gibberish. But it’s a fun, self-inflicted coding exercise, and even the failures can be hoots to read.

So in celebration of another NaNoGenMo wrapping up, I’ve compiled a few interesting “novels” from these past years.

2013: Alice’s Adventures in the Whale

Leonard Richardson created scripts that take two already-written stories, and interweaves the prose of one with the dialogue of the other, such as Alice’s Adventures in Wonderland and Moby-Dick, or the Whale.

Alice was beginning to get very tired of sitting by her sister on the bank, and of having nothing to do: once or twice she had peeped into the book her sister was reading, but it had no pictures or conversations in it, “Can’t sell his head?—What sort of a bamboozingly story is this you are telling me?” thought Alice “Do you pretend to say, landlord, that this harpooneer is actually engaged this blessed Saturday night, or rather Sunday morning, in peddling his head around this town?”

One of my personal favorites, Liza Daly embraced whole hog the nonsense of computer-generated novels by playing with real-life inscrutable Voynich Manuscript. Her code searches the internet for 18th century images on alchemy, biology, etc., randomizes the original Voynich Manuscript, and then repackages it in a gorgeous book form. And, to be fair, it probably makes just about as much sense as the original manuscript. 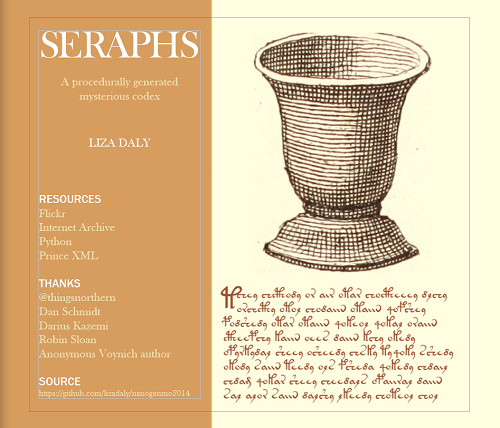 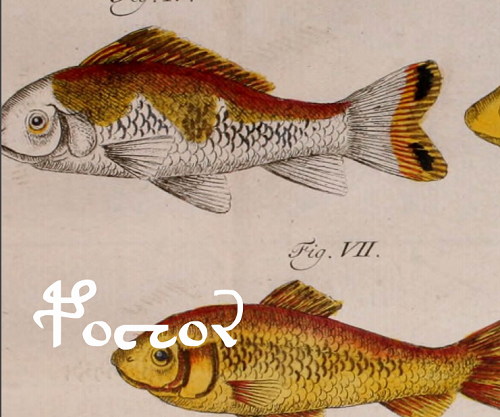 James Joyce’s Ulysses is a notoriously obtuse novel by a human being. And in the book, character Molly Bloom unleashes eight intensely long, rambling sentences on her thoughts while in bed. Inspired by Molly, Ranjit Bhatnagar created Molly’s Feed, a stream-of-consciousness novel using Twitter to fill in Molly’s thoughts. And, amazingly, it actually feels pretty true to the original, and even approaches touching at times.

2016: If on a winter’s night a library cardholder

OK, I’m biased choosing this one. Italo Calvino’s If on a winter’s night a traveler is my favorite novel. So I was tickled pink that librarian Robin Camille Davis created her own algorithmic pastiche. It’s a wonderfully charming concept: the novel is about You, remembering an amazing book you once read, and searching the libraries in New York City one by one to find this book.

You arrive at 112 East 96th Street, in Manhattan, and find yourself on the steps of 96th Street Library.

As soon as you enter, you see a familiar-looking red book on display in an exhibit. You snatch it up and read the title: Quit Your Worrying!.

You flip to a random page and begin to read…

After reading a snippet of each (real-life) book, You realize that it’s not the right book after all, and continue on your bookish journey to the next NYC library.

Eoin Noble took scripts from Star Trek: The Next Generation and used Markov chains to generate a hypothetical new episode, supposedly from pieced together memories from Data the android. Yes, it makes absolutely no sense, but the dialogue sounds kinda sorta maybe correct. As user hugovk put it, “It’s a bit like having Star Trek on in the background!” Here’s a snippet from what is the most bonkers episode of TNG:

TROI: I want you to start a new piece… I’d like you to talk about things they want to reveal.

Tasha, duty always, steps forward and grabs the fallen singer’s BAT’LETH. In the background, the bed is violently shaken underneath her. Picard gives them a reassuring smile and moves away… Timicin sighs, gets out of bed.

WESLEY: For a second there, I thought I wanted to be by myself, but I guess you could say I’m a little… troubled. No one is going to be fine… I don’t have to find my own path.

She is sitting down at his left arm and grabs it, as if he’s talking to himself—he’s practicing a speech. Worf reacts, surprised, but before he can answer, Alexandra BURSTS INTO the room, Troi CLOSE BEHIND him. Wesley makes an adjustment to his circuitry.

It was really hard to pick what stories to share, so here’s a fistful more that I found neat!

And hey, if you are even mildly interested in coding, consider joining in the fun for NaNoGenMo 2018!