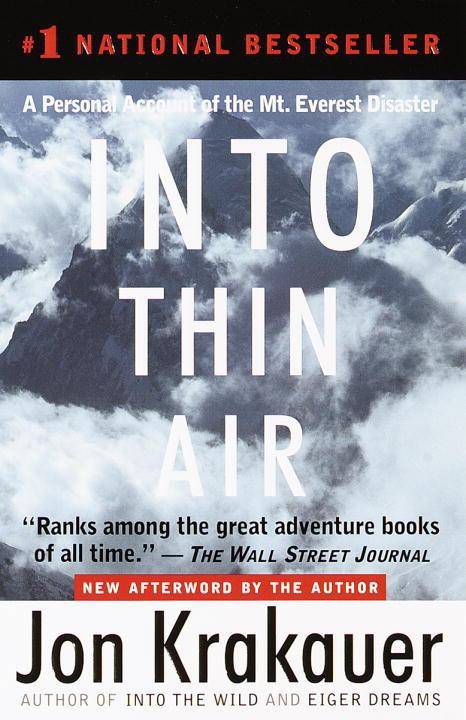 This is a guest post by Jeremy Anderberg. Jeremy lives in Denver with his wife. During the day he is an editor and writer over at The Art of Manliness. At all other times, he can be found with either a hot cup of coffee, a tall glass of craft beer, or a good book. Often a combination of the three. Follow him on Twitter @jeremyanderberg. 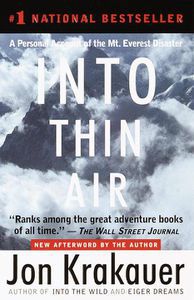 It’s all Jon Krakauer’s fault. I blame him entirely for my addiction to non-fiction outdoor adventure books. Like many great book discoveries, I first saw Into Thin Air at a used bookstore. Its threatening and mysterious cover – featuring Mt. Everest shrouded in ominous-looking clouds – whispered to me, “Pick me up. Come on. Open the first page. See what happens.” I had heard of the book and knew it was well-reviewed, so decided to give it a try.

A day later, after I was done reading Into Thin Air, I bought Into the Wild on Kindle because I couldn’t handle waiting for more of Krakauer’s writing. First, a deadly first-person ascent of Everest, and now a young man lost and alone in the Alaskan wilderness. Something about it just sucked me right in. I could feel the crisp mountain air seeping into my lungs right from the pages themselves.

Now, you must know about me that I’m by no means a hardcore adventurer. I live in Colorado, and my wife and I do hike most weekends, but bear in mind that we’re sticking to 10 miles or less, and our routes never involve anything perilous (except that one time we saw a bear – but that’s another story). I’m actually quite a wimp when it comes to daring outdoor adventures. Keep me on my leisurely, mostly flat lake hikes, and I’m happy as a clam.

So what is it that draws me to the most gut-wrenching outdoor adventure books I can find? Am I an armchair adventurer, secretly longing for the intensity of staring death right in the eyes? It’s possible, but I don’t think so. When it comes down to it, I’m perplexingly drawn to the inexplicably crazy people that do these things that I read about. Why on earth would you climb a mountain that’s nearly 30,000 feet tall and kills multiple people every single year? Why would you hike across Antarctica, alone, in the winter? These are the stories I read, and I just can’t ever understand why people do it. It’s like staring at the woman wearing leopard tights in Walmart; you just don’t get it, so you have to keep staring until you can find a way to understand what’s going on. 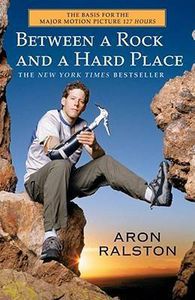 What’s worse about this reading addiction of mine is that the more gruesome and mind-bendingly intense, the better. I’m reveling in people’s worst outdoor nightmares. Between a Rock and a Hard Place (127 Hours) – I can’t get over Aron Ralston’s idiocy of not leaving a note about where he was, and like a car accident, I’m drawn to his bloody and mangled arm. Touching the Void – climber Joe Simpson broke his leg near the top of a 20,000 foot mountain in Peru, was abandoned by his climbing partner who assumed he was dead, and crawled his way down through snow and ice and survived. It’s hard to believe these are even real stories. I sit with a gaping mouth as I turn the pages of more and more of these outdoor adventure books. Does that make me a bad person? For being more entertained by true stories of harrowing life and death situations in the great outdoors than by fictional stories, where no one actually gets hurt?

Possibly. But I’m okay with that. I have to be. Because I won’t stop reading these. In any bookstore I go to, I head to the outdoor section and look for the longest subtitle; that one is bound to be a winner in the “harrowing” category.

“Hmm, let’s see what we have here. The subtitle is ‘The Greatest Survival Story in the History of Exploration.’ Sounds good so far. Oh, it’s a story about a man who trekked across Antarctica and lost the skin on the bottom of his feet, so he had to use duct tape to literally keep his lower extremities from falling apart? Why yes, I think I will buy that one.”