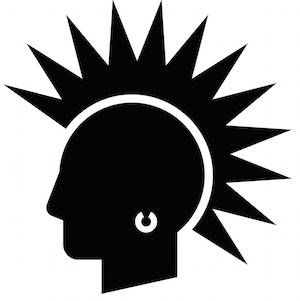 Even though it predates my existence by a few years, I’ve always been drawn to punk. (Are you surprised? Maybe, if you saw my country music reading list.) I’m clearly not the only one; punk has become pervasive in our culture but somehow manages to retain its edge in a day and age when you can see mostly-naked-people and zombies on TV. You can still read about Iggy Pop’s early performances and say, “Whoa, that guy was hardcore.”

I’ve been reading a lot about punk history in the past few years, since I missed experiencing it live (bummer). Here are some rocking good history reads to round out a punk reading list. 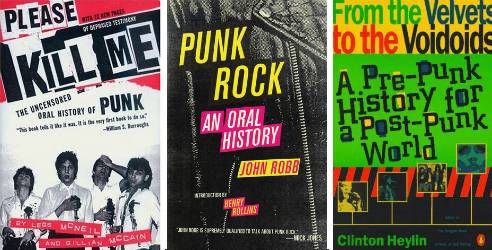 One of the things about punk is that, if you ask different people what “punk” is, they’re going to come up with totally different answers. There’s NYC punk, LA punk, London punk, Bay Area punk. There’s proto-punk and post-punk and a lot of genrepunks. Thus, there’s no real definitive history of punk tome that one can point to, but a lot of good ones that encompass different movements.

Please Kill Me: An Uncensored Oral History of Punk by Legs McNeil and Gillian McCain is a personal favorite of mine; it intertwines music with concurrent art and poetry, which were hard to separate in the beginning of the punk movement. It covers mainly the New York/Detroit scene, but dips into LA/London as well. Both Please Kill Me and Punk Rock: An Oral History by John Robb weave anecdotes from real punk rockers to tell a story that emerges out of the deep roots of punk rock.

Another history, From the Velvets to the Voidoids: The Birth of American Punk Rock by Clinton Heylin, has a more scholarly (and some say, snobby . . . YMMV) tone but is jam-packed with information about bands and delves more deeply into the Detroit and Cleveland punk scenes.

For local flavor, We Got the Neutron Bomb : The Untold Story of L.A. Punk by Marc Spitz and Gimme Something Better: The Profound, Progressive, and Occasionally Pointless History of Bay Area Punk from Dead Kennedys to Green Day by Jack Boulware and Silke Tudor both focus on west coast punk. England’s Dreaming: Anarchy, Sex Pistols, Punk Rock, and Beyond by Jon Savage is considered one of the best tomes out there on the London punk scene. 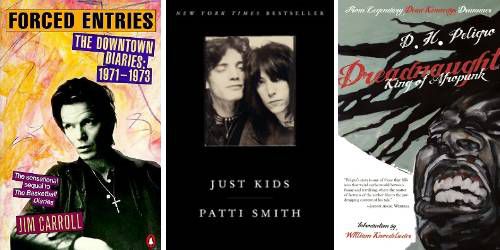 The great thing about the literacy overlap of the punk movement is that we have great writers who also made great music. Patti Smith’s memoir Just Kids was a critical success when it dropped in 2010; her ex-boyfriend Jim Carroll’s second memoir Forced Entries is less famous than its predecessor, The Basketball Diaries, but is probably my favorite punk era memoir. (Then again, I’ve had a Jim Carroll obsession since middle school and I may be biased.) D.H. Peligro wrote about his experiences in The Dead Kennedys in Dreadnaught: King of Afropunk (bonus: he also played with the Red Hot Chili Peppers). Richard Hell mused on the nature of rock and roll in I Dreamed I Was A Very Clean Tramp. Sonic Youth’s Kim Gordon wrote about being a Girl in a Band and Viv Albertine’s raw look at male-dominated punk in Clothes, Clothes, Clothes. Music, Music, Music. Boys, Boys, Boys. lays the foundation of the Riot Grrl movement to come. 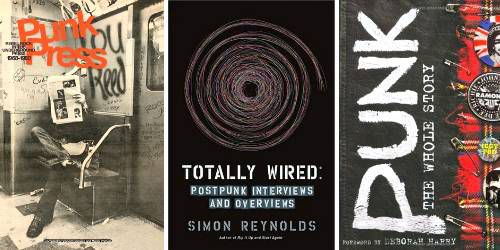 The era of punk was also the era of DIY culture (no, not the stuff you see on HGTV–not that I don’t love me some HGTV), and that meant DIY media and zines. The Best of Punk Magazine highlights some of the great interviews, photos, and art put out by the publication that helped popularize the term “punk.” MOJO Magazine put out their own collection, Punk: The Whole Story, and Tesco Vee and Dave Stimson collected 22 issues of their zine in Touch and Go: The Complete Hardcore Punk Zine ’79-’83. If you’re into post-punk (Joy Division, Talking Heads, The Specials), Simon Reynolds’ compilation of interviews in Totally Wired will be well-thumbed in a hurry.

If you’re into pictures (and who isn’t?), Punk Press: Rebel Rock in the Underground Press 1968-1980 and CBGB & OMFUG: Thirty Years from the Home of Underground Rock will provide hours of pleasure. (CBGB was Hilly Kristal’s attempt at a country and western music venue that accidentally birthed punk rock instead. Whoops!) Once you get through those, Jon Savage’s collections Punk 45: Original Punk Rock Singles Cover Art and Punk: An Aesthetic will help fill the punk void.

If you’re not completely punked out at this point, A Cultural Dictionary of Punk, 1974-1982 by Nicholas Rombes is an “obsessive[ly], exhaustively researched” yet subjective and personal dictionary of punk that people hail as being absolutely brilliant.

These are my go-to titles for people who want to immerse themselves in punk or venture into the punk realm for the first time, but they’re by no means exhaustive. If you have favorite titles to add to this punk reading list, let me know in the comments!