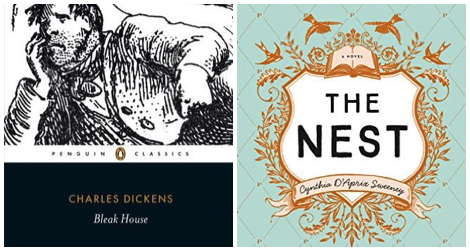 This is a guest post from Melissa Ward. Melissa spends her daytime hours as a research associate in hospital epidemiology – to feed her two cats – and some of her evening hours selling books – to feed her brain. Any leftover hours are spent reading or knitting (sleep is for the weak) or writing at Scuffed Slippers and Wormy Books. She lives and works in the Iowa City metro area. Follow her on Twitter @balletbookworm.

*Spoiler alert: although Bleak House has long passed the expiration date for spoilers, The Nest has only been out a few weeks. While I will try not to spoil major parts of the plot of The Nest, I may get into some plot and character choices. 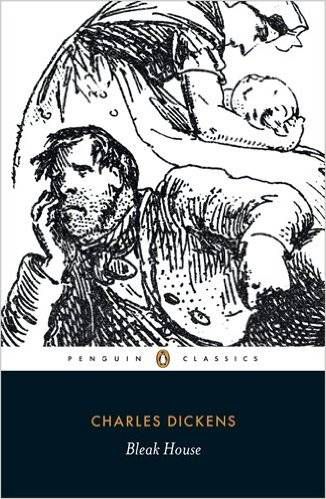 In the early 1850s, Charles Dickens serially published a satirical take-down of the English Chancery court system, Bleak House. Parallel narratives – a present-tense omniscient third-person alternated with a past-tense first person – tell the story of “the most famous case in Chancery.” Jarndyce v. Jarndyce (fictional but based in fact) is a generations-long lawsuit concerning a set of conflicting wills for the  inheritance of the substantial Jarndyce fortune. Each will names different heirs and portions so the lawyers fight it out in the court with little progress. Claimants inherit their ancestors’ claims on the fortune and, in turn, become obsessed with the outcome of the case often with ruinous and devastating effects.

Bleak House opens on a spectacularly foggy day – a London particular – when the orphans Ada Clare and Richard Carstone, wards-of-court and claimants in the Jarndyce suit, are presented to the Lord Chancellor in Chancery. They are invited to live with their good-hearted cousin John Jarndyce, of Bleak House in Hertfordshire, and Ada’s new companion/housekeeper, Esther Summerson. Even as Mr. Jarndyce rails (as much as a deliberately happy person can) against the Jarndyce Chancery case that claimed the life of his uncle, Richard becomes captivated by the lawsuit.  He cannot fix on a profession to earn a living because he continually looks forward to what he and Ada will receive when the Jarndyce suit is settled. The suit becomes an addiction; he cannot think of anything else. It poisons his mind and causes him to suspect Mr. Jarndyce of having ulterior motives in being his friend. He complains that he is “owed” a favorable judgement in Chancery, that he and Ada will live in comfort for the rest of their lives. He borrows against his future with no guarantee he will see even a single penny. It is no surprise that the Chancery suit ruins him, literally and figuratively.

Richard’s obsession is groomed by the charming leech, Mr. Harold Skimpole. Mr. Skimpole is such a child, such a simpleton, he has no concept of money or management or of profession and requires his friends to look out for him…in short, he wishes to live like the landed gentry and upper classes even though he does not have an independent income and has cleverly found rich friends, like Mr. Jarndyce, who allow him to sponge off their good will (and fortunes). He feeds Richard’s supposition that he is the heir to a large fortune, negating the need for an income now. He cleverly plays Richard and Mr. Jarndyce off one another to his own advantage. He uses Richard’s real inability to understand how saving money actually works to get him to pay for daily expenditures. (Side note: Richard truly thinks that if he gives someone ten pounds, then is refunded those ten pounds, it’s like he has made ten extra pounds, which is like having twenty pounds. Is this New Math?) Mr. Skimpole also, for the trifling sum of five pounds (approximately 400 pounds in 2015 money), has introduced Richard to the sketchy lawyer Mr. Vholes who is more than happy to “churn” Richard’s suit in Chancery then bill him for it, of course. Responsibility and conscience simply slip off Mr. Skimpole’s back and into the murk of the Thames (the body of water under which I would like to hold Mr. Skimpole’s head).

Bleak House runs to approximately 850 packed pages of Victorian prose, padded here and there to meet the needed page counts during the initial serialization. Compare that to the barely-longer-than 350 pages of Cynthia D’Aprix Sweeney’s debut novel, The Nest. There is hardly a spare word to be found as the four Plumb siblings bicker and bitch and worry and self-destruct over the outcome of their promised nest egg, The Nest.

For, you see, The Nest had been meant by their father to provide a modest amount of money to each child (approximately $50,000) to help with a retirement fund or college tuition, etc., to be disbursed when the youngest child turned forty. However, the magic stock market bubble of the 1990s/early 2000s and shrewd account management has promised to provide them each with an order of magnitude more money than intended. Close to a cool million.  Bea, Jack, and Melody are counting on that money. They need it, have plans for it, are obsessed with it. That money has earmarks. Melody will turn forty next year….

But their golden-child, screw-up brother Leo ruins it all.  By crashing his car. While drunk and high. After leaving a family wedding. With a nineteen-year-old waitress he has propositioned. Who loses a foot in the accident. And who is given an extremely large payout from The Nest by the Plumbs’ mother, Frannie, as hush money.

Get this: The Nest is a retelling of Bleak House.

The three younger Plumbs are desperate to make Leo repay The Nest. They have heavily overspent on their futures. Jack has secretly borrowed a massive line of credit using as collateral a second home owned jointly with his long-time partner; he has been using the money to prop up his specialty antiques business but the loan is coming due and The Nest would save him having to confess what he’s done. Melody has a severe case of Keeping Up With the Joneses-itis – she persuaded her husband to purchase a house in Westchester, which they can’t afford, to provide their twin daughters with as much opportunity and perfect upbringing as possible; she needs The Nest to save her beloved house and send the girls to college, any college they want, debt-free. Bea is not in as desperate a situation as Jack and Melody but she had to repay her publisher’s advance when she failed to deliver her promised novel; The Nest would give her a cushion and maybe a way to restart her writing career. Collectively, they are poor Richard Carstone from Bleak House, always looking ahead to a fortune that is never guaranteed to come to them. The Nest is no longer the promised, gleaming jewel but instead poisons the siblings’ relationships in the way that Jarndyce v. Jarndyce poisons Richard’s mind and health.

Leo, however, is the slippery Mr. Skimpole, always leeching off others and never taking responsibility for his actions. Outwardly, Leo professes to be cleaned out – his ex-wife Victoria, who helped him spend the fortune he made in media, has taking nearly all their joint holdings in a divorce that buys her silence about the accident and he’s been out of the industry for a while. But he has a plan….which doesn’t involve using his secret millions in his Grand Caymans bank account. He doesn’t want to tap into his “savings” by repaying his brother and sisters. He doesn’t care about the girl whose life he ruined (the closest he ever gets to caring one iota is immediately after the accident when he’s worried she might die…but it’s still a level of self-serving concern). He wants to bask in the glow of the Prodigal Son without actually swallowing his pride. He trades on the family lawyer’s abilities. He trades on his siblings’ trust. He trades on the sexual chemistry of an old girlfriend. He trades on the name of a former business partner to try and get back into the game. His conscience troubles him not a bit. I’d like to drown him in the Hudson.

Other characters from The Nest have origins in Bleak House, too. The injured Matilda and her extended family are like poor Jo the crossing sweeper, paid off and swept aside without another thought like so much detritus. Iraq War veteran Vinnie is a reflection of ex-Army officer George Rouncewell, both trying to put their lives back together. The grief-stricken Tommy is the curmudgeonly Mr. Krook, lost among relics of the past but with a life-changing treasure hidden from the world. Lit-mag founder Paul is devoted to Bea in the same way that Mr. Woodcourt remains devoted to Esther through the years. Melody’s husband Walter is Mr. Jarndyce, devoted to keeping his family happy and safe with what they have now, not with what might be promised. Leo’s ex-girlfriend Stephanie is the loyal Ada, stoic and hopeful to the end.  Walker, Jack’s partner and new husband, has analogues in Mr. Gridley and Miss Flite who are casualties of the ruinous Chancery court. Even twenty-first-century Manhattan and Brooklyn with all the quirks of hipsters, publishing, and white-people affluence finds similarity with Dickens’s murky London and the Inns of Court.

Yet, for all the parallels my mind unearthed, The Nest is allowed to play its own plot to conclusion (a problem I often find with “retellings” of classic novels is that modern characters are forced to lock-step with their originals). Sweeney primed her characters with privilege, debt, and a hunger for what is “owed” to them and then let them go. To lie. To evade. To willfully avoid. To explore. And to learn. Yes, The Nest is a novel about privileged, upper-class New Yorkers and their problems. The main characters are all white and mostly straight. Most of the diversity comes from supporting characters. But Sweeney skewers her characters and their stereotypes. The mania for “image”, for affluence, for recognition and success. Hipsters. Crunchy moms. The façade of wealth represented by homes or expensive goods. Home equity loans. The expectation that privilege gets you everything you want with none of the responsibility for any of it. It’s all as deftly crafted as Dickens’s “philanthropic” Jellybys, Pardigles, and Quales and penny-pinching Smallweeds.

I don’t think Sweeney set out to remake Bleak House. I did a bit of Googling and wasn’t able to find evidence that the parallels are deliberate. I only picked up on it because I’m about 70% of the way through my first complete reading of Bleak House; halfway through The Nest I had an “Eureka!” moment. But if she meant to use the skeleton of Dickens’s best novel to build her examination of WASP-y trust fund privilege and panic, Sweeney has succeeded admirably.